The Mahachai Betta is a wild caught betta. The Mahachai Betta is one of the newest additions to the Betta world. Scientists don't have as much information on these little fish as other fish, because they are still studying their behavior, water conditions, and they still need to verify that it is in fact a Betta and not some other type of fish. 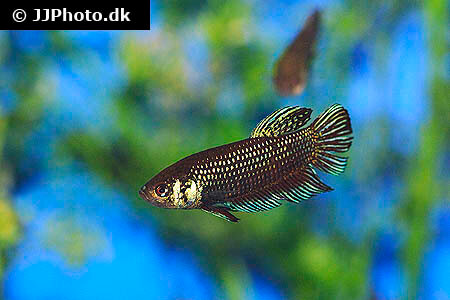 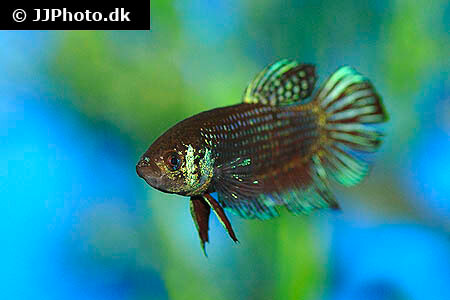 Unlike the Betta everyone is used to seeing, Betta Splendens, this little fish is found in a brackish swamp just about 20km, or a half hour drive, outside of Bangkok, Thailand and their habitat is shrinking all the time due to commercial developments. This little fish resembles two other bettas in behavior and in appearance, and those Bettas are Betta Smaragdina and Betta Imbellis. The males of this species is very dark, almost black and covered in metallic green. The females are more brown with some of the metallic green. The mature males almost always have red eyes and a spade-shaped tail. Both the male and female have a little red tint on their fins, it isn't as bright as the regular betta everyone is used too. They grow to be one of the largest Splendens members, with slender and longer bodies than even the common betta. They reach a total of 2 inches when they are fully grown. Their body resembles more of a dolphin or orca than a common betta.

This is one of the most peaceful bettas with the males being able to live in the same aquarium with the occasional territorial dispute. They are extremely terrified of people and if you turn on the light in the room where they are held, they will be seen darting to a dark corner of the tank. Unlike the common betta, these little bettas can't be kept in the tradional jar, which some people still use but shouldn't. They will become totally stressed out and may even die due to it or not accept food because they feel threatened. 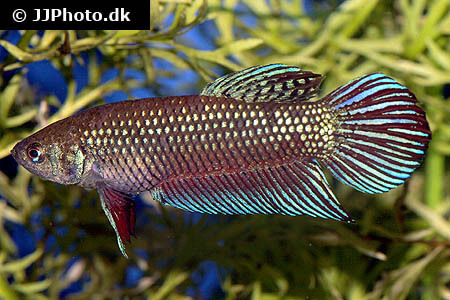 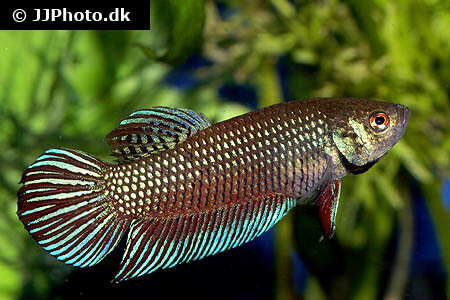 They should be kept in a 10 gallon tank that, like other bettas, should not be completely filled to the top. They do best in slightly hard, slightly brackish, with tannins. The substrate should be fine gravel or silica sand. They like lots of hiding places made out of artificial or natural means. With leaf litter on the bottom, mostly Indian Almond Leaf, makes the water better by way of tannins for this fish. Clear water will cause lots of unneeded stress to the fish. Some of the best plants for the tank would be those that do well in brackish water.


The way they spawn is the same as with other betta species, just the female can stay in the same tank and doesn't need to be removed. If there are one male and many females, the male will mate with all the females and have all the fry and eggs in the same nest. The adults will ignore the free-swimming fry since they present no threat to the adults. The raising of the fry is the same as with the common betta, it just will take a lot longer than with the common betta. They would have trouble eating BBS so they should be fed vinegar eels, microworms, etc. or micro-organisms in the tank. To compare the difference in growth rate between the common and the Mahachai; in 4-5 months, the common will be almost fully grown and will be able to be told if a male or female, while the Mahachai is still less then an inch in length and may be able to tell the genders apart.