When getting started with breeding the Betta, both male and female that are around the same size must be chosen. They should be fed well, usually with live foods and kept in 5 inch clean water with a temperature of 80 F. Plastic plants and decorations, such as plant pots, are advised to be placed in the aquarium for the female to hide when necessary. They must be separated at first but allowed to see each other through a separation. Generally, either a tank separator can be used to keep them separate or a hurricane globe can be inserted into the tank with the female inside it.

Interest should be shown for one another and thereafter the male will start building a nest. These bettas nests are created when the male draws in air from the surface and envelopes it in a film of saliva. When the he releases it, it floats to the surface. Some leaves, a piece of styrofoam cup, a plastic lid or something similar should be put to float on the water surface or taped to the side of the tank. As he releases the bubbles they will be trapped underneath the item. As this process repeatedly done, the nest is slowly created.

When the nest is done, the female should then be released from the hurricane globe/seperation and spawning should follow. Sometimes it may not be right away and can take up to 5 days before they start. If too much aggression is shown towards the female they should be separated again. However, sparring often takes place. If all is well and she is ready, he will lead her to a spot under the nest and "embrace" her, the eggs are then released. The female may look weak and lay motionless, but she will recover. When the spawning is complete the female will look for a place to hide. At this point in time she is to be taken out of the tank or else the male can kill her. The male will then pick up the eggs and 'blow' them into the nest and thereafter he will guard them until they hatch.

Mouth-brooding bettas come from waters where the surface is not still, like streams, making it impossible to build a nest.

To breed them, clear clean water and substrate ranging from mud to gravel is needed (depending on the Betta species). Dense vegetation should be planted into the aquarium. Their water temperature should be cool, say between 65 and 75 degrees F. Flowing streams coming from the highlands have cooler water.

At 80 degrees Fahrenheit and above the fish will be visibly stressed. To tell the difference between male and female, as in most Bettas, the female has a smaller head, she is duller in color and smaller in body size. They should be fed bloodworms, frozen daphnia and most meaty foods.

Like the bubble nest building bettas, the male and female fish should be separated, for a week at the least. Occasionally a pair of mouth brooding bettas may 'dance' and the female having her fins flared out may dance around the male to attract his attention during the courtship. With the mouth brooding Betta species, it is the female who starts the spawning.

Spawning will generally take place inside a plant pot, with the same procedure of most anabantids, the male "embracing" the female. After spawning the male will gather the eggs in his mouth or the female may pick the eggs up into her mouth and spit them to him. The process can take up to quite a few hours. Unlike the bubble-nest-building Bettas, the female guards the area which the male takes to brood. Most males will then brood the eggs for between 7 to 10 days. Some males hang near the water surface others take to "caves" to brood. He may not eat all the while he holds the eggs in his mouth, although it is believed that some may take a tiny bit at a time. The male will get thin, looking as if he is feeling very low and will look as if he has trouble breathing through out the brooding process. Also, his coloration will get darker, mainly in the head area. Care should be taken at this time, as the male betta will eat the eggs if he is disturbed often. 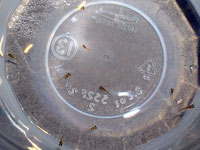 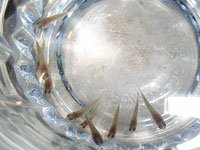 Hatching the Betta Eggs and Fry

Feeding can start two days after hatching with bubble nest building betta fry using micro food. After two weeks and around every 4 hours the fry must be fed live baby brine shrimp or micro worms, a bit at a time. Thirty six hours after spawning, you will notice the tiny fry falling out of the nest dropping to the bottom, the male will retrieve them straight away and blow them back into the nest. When the fry become free swimming horizontal it is best to remove the male as he might start taking them for snacks. But, if he starts eating the fry earlier it is possible to remove him then. The fry will fall to the bottom and remain there until they become free swimming.

For the mouth brooders, it is recommended that the male is taken out of the tank straight after he spits out the fry. Baby brine shrimp or micro worms can be fed to the fry immediately after the male spits them out. Thereafter as they grow, follow up with grind worms, flake foods and quickly pellets.

It is essential to keep the water clean when you are raising the fry. A very small plastic tubing attached to air tubing or a turkey baster can be used to suck up the debris at the tank bottom.

Sabi is from South Africa and started fish keeping with goldfish five years ago. There after the hobby slowly but surely grew. I've kept Goldfish, Koi, Malawis and now tropical freshwater fish. I currently have two running tanks, a 67 gallon and a 2 gallon. The 67 gallon aquarium is a community tank consisting of Angelfish, Tetras, Rasboras, Plecos, gourami and corys and the in the 2 gallon I may add a betta. I one day hope to breed either Discus or Angelfish.