Hello, my name is Ryan I have been in the Aquarium trade for four and a half years now. My other hobbies include playing the piano, inventing things, philosophy, and reading. I mostly play the Piano and read though, I have been playing for four years also, and I could never afford lessons so I taught myself. Unfortunately I couldn't afford the books to teach myself how to read music either so I learned to play by ear (not like a savant). I would sit in my room with no lights on other than my fish tank, and the light that came from my electronic keyboards LED screen then I would listen to the songs slowly than learn them bit-by-bit. Throughout the day I would play the song over and over in my head until I figured a part of it out then I would go home and run to my piano and try it. Sometime all it takes is for me to press one key, the key that the song was in it all falls into place after that (only sometimes usually I have to do this the other way). So I would have to sit down and learn the song. There are some drawbacks; the constant playing of a song over in my head (which to anyone watching me at the time would think that I was crazy), and not being able to learn a song without tinkering with it. I have never been able to learn the original version of any song I always change it without even knowing it. But I compose music all the time I just need to learn how to read music somehow...

My interest in fish keeping began when I was young, about 5, my Grandmother had a 55 gallon fish tank with a trio of large Angelfish they were about eight inches tall. I would sit and watch these fish for long periods of time. After that my mother got a fish tank which I (as a child) would tamper with. Instead of being caught with my hands in the cookie jar, they were caught in my mother's fish tank. About ten years of my life went by before I tried to keep any pets other than cats or dogs; I started with hermit crabs, then reptiles to no avail. Finally I was given my Grandmother's old 29 gallon fish tank that she had in the garage. Before she passed away I had started setting it up, it's been moved three times but other than that it has been running ever since. I go to the local Tech-center and study in the field of "small animals" I picked Aquatic Snails. Throughout the school year I studied this, that's why I have some knowledge in the subject.*

I also had a go at salt water aquariums, I had somewhat good success. I had to move all the inhabitants to the 190 gallon fish tank into the middle school, unfortunately the yellow tang didn't like not being the biggest fish in the tank, and killed all the fish inhabitants before committing suicide. Fortunately all the inverts and live rock survived and are flourishing to this day. Eventually I set up a 55g tank that I use to breed snails (it also has some Angelfish). I worked out a deal with my LFS, I gave them snails to sell and my supplies were provided for all my tanks. Unfortunately that LFS was broken into and trashed. As a student I have no source of income so we'll see what the outcome of this predicament is. 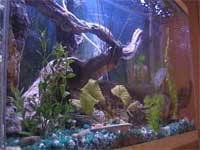 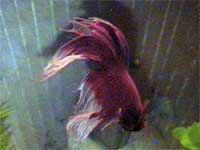 I'm going to college at the end of this year so I will have to shut my tanks down eventually, maybe I'll be able to keep my 29g at the dorms. Other than that I can't afford any other tanks now. But I do plan on getting more true Apple Snails to breed along with my Columbian Ramshorns.


I'd like to thank all the forum moderators and members for listening to my opinions and running/participating in such a unique website. This networking of information and co-operation has led Fishlore to the glory that it has reached today. (Yeah I talk cheesy like that all the time)

*If you need help with anything to do with freshwater snails, feel free to PM me, or post it in the snails forum under freshwater invertebrates.