The Green Spotted Puffer is a highly unique and interesting fish. Unfortunately the Green Spotted Puffer (GSP) is often misunderstood. Commonly sold as a freshwater fish, the GSP will only do well without marine salt in its water for a very short time. A good brackish setup is needed for health and longevity of the GSP. They should be kept in large aquariums, with no less than 30 gallons per puffer, as they grow to be six inches. 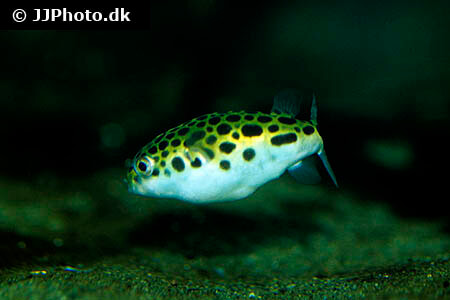 A big issue with these fish is the question of tank mates. Some have reported success in keeping the Green Spotted puffers with the Figure Eight Puffer, which when young looks very similar to the Green Spotted Puffer. However, the Figure 8 will only get to 4" and is much less aggressive, while the GSP will get up to 6" and is extremely aggressive as an adult. Some other possible tank mates could be mollies, scats, monos, archerfish, and bumblebee gobies. However, it is not uncommon for a puffer to get along with one of these tank mates for many months and then as soon as a sign of weakness shows or space becomes crowded, the puffer will eat the other fish. The best setup for them is species only, with either only one specimen or a large tank with several GSPs.

These puffers require immaculate upkeep. They are scaleless and lack gill covers, so they should only be placed in a pre-cycled aquarium. Weekly water changes are recommended, as well as over filtration. They are intolerant of ammonia and nitrite, and should be kept with low nitrates. The puffer's tank will soon be overrun with algae, but since there are no cleaners that will not be devoured by the puffers, it is up to the owner to take care of the algae. These fish are almost guaranteed to not breed in your aquarium. It is impossible to sex them, and nothing is known about the conditions needed for them to breed. 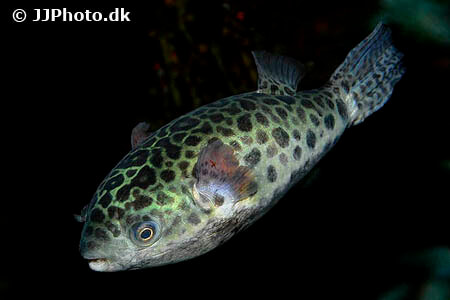 The Green Spotted Puffers sold at stores are always wild caught, and thus often come in with internal parasites. Be sure to quarantine them before adding them to your aquarium. When selecting a puffer a good way to tell if they are healthy is if they have a rounded stomach rather than a sunken in one. Also, their stomachs should be white instead of grey, and they should be actively swimming and acknowledge when people lean in to take a look at them. If a puffer has a grey belly and parasites are ruled out, the next most likely possibilities are improper salinity or poor diet. Although it's what they are famous for, you never want to see your puffer puff up. This is only triggered from extreme stress, and usual ends with the fish's death. Be careful when transporting puffers so they don't puff up. It's best to move them from place to place by directing them into a bag rather than netting them. While puffing in the water is dangerous to them, puffing in the air will almost certainly be fatal.

GSPs will usually eat everything they can, and will literally eat themselves to death. It's better to give them a smaller, healthy diet rather than overfeeding. Variety is the key. The most important food for them is snails that are about the size of their eyes. The shells of these snails will wear down their beak-like teeth, which would grow so long that they would no longer be able to eat. The largest part of their diet is crustaceans. They are pure carnivores, and love meaty foods.

Green spotted puffers are wonderful pets, and are highly rewarding. They are some of the most intelligent fish readily available, and have magnificent personalities that are more like dogs than fish. With proper care and attention, these fish can give their owner 10 or more years of great companionship. 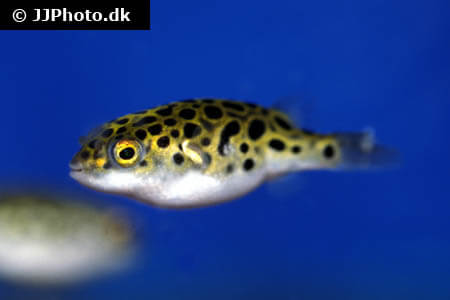 Origin / Habitat : brackish rivers and estuaries of Borneo and Sumatra

Tank Mates : Must be chosen with caution. Most will just be eaten. Some possible companions are: mollies, scats, monos, archerfish, bumblebee gobies, and other GSPs.

Fish Disease : Freshwater Fish Disease - Diagnose, Symptoms and Treatment - Be sure to quarantine, as they are wild caught and often come in with parasites.

Gender : Even for experts, it is nearly impossible to sex them. Usually the only way is by dissection, or if they happen to lay eggs (an unlikely occurrence).

References
- Choosing the Right Fish for Your Aquarium by Jeremy Gay

About the Author: pinkfloydpuffer is an avid puffer lover, and currently has two very healthy GSPs.