Introduction
Hi everyone, my name is Henri (pronounced Henry). I'm a 16 year old guy, in my first High School year. I live in Albania, a country where the aquarium hobby isn't really appreciated and there is a huge lack of information about proper fish keeping. I'm a really good student and I try to focus on studies in the first place, but of course that I pay a lot of attention to my other interests. I live in the capital city with my family, me, my parents and my brothers, my older brother who is 21 and my younger one who I am more attached to, 13 years old. I am the "nerdiest" of the three of us and the one who does most of the chores. I'm outgoing and really open to people I get used to, but extremely shy to people I don't know good yet. My friends tell me I am VERY funny, but that's not something I can declare on my own. I love to watch movies, such as Harry Potter (my favorite), The O.C., I like comedies and horrors a lot etc. I'm good at English, Math and Chemistry.

How I got into the Hobby
I've always loved animals, and being grown in a big house (now I live in a closed apartment), I used to spend most of my time as a child in the backyard, collecting colorful bugs, catching butterflies, playing with the countless cats we used to own and my mom would occasionally find a hurt bird or frog that I secretly "healed" in my room.

We moved to the current house when I was 5 and we had to 'get rid' of our current pets. One year later we get parrots, canaries and zebra finches that bred like rabbits. My mum got sick of the mess caused and we had to sell the birds at the pet store. Months later I had a science project about creating a mini-aquarium, consisting of a bowl, a fish and some pebbles. Yes, that's what was written in the book.

I begged my dad to keep the 2 goldfish and the next day he bought a 1 gallon bowl for them. It seemed HUGE to me, but what did I know? The goldfish lived there for 3 months until the bowl fell of my dad's hands during a waterchange and we had to keep the goldfish in an ugly 3 litre container. The fish died and we constantly bought goldfish that died within a week.

After the 6th or 7th dead fish, I decided to stop. Two years later my dad made a big tank. It was about 30 gallons and it was my dream tank. I thought that tank was big enough to house about 10 goldfish. It was filled and used for 4-5 months with 2 silver dollars and a black skirt tetra but it would always leak. We couldn't find where and we had to toss it.

Two years ago I got my first 10 gallon as a Christmas present and that's where my real journey begins. My young brother got 5 goldfish with the money he had saved and luckily, 2 weeks after I found Fishlore.

My Tanks
It's been quite some time that I have been on Fishlore, and in "a parallell universe" I'm one of those members who has many set ups, from the small 10 gallons to the amazing 100-125 ones. I hope and I believe that I will be one of these members soon, as soon as I grow up. Due to the lack of space and parental permission, I only have two tanks right now, a 10 and a 20 gallon. 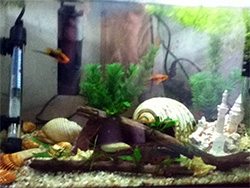 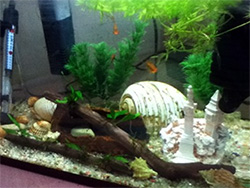 The 10 gallon is my oldest tank, it's the one I got as a Christmas present. It's stock has been changed lots of times. Currently it has a pair of swordtails and two juveniles, but this is of course not a permanent home. These fish will be replaced by a betta as soon as the babies grow out a bit more. This tank is filtered by a small internal filter, rated under 350 litre/hour (about 95gph). There are lots of MTS in this tank and some ramshorns. One or two apple snails will be added to this tank soon. Plants: 6 small java fern and a huge bunch of floating hornwort. Light is a 11W fluorescent bulb.

The other tank is a 20 gallon that I bought in a store that sells used stuff. It's a dirted tank (the substrate is made of a layer of mineralized top soil and capped with regular sand/gravel). This is a moderately-high light tank. Plants: bunches of Bacopa monnieri, lots of Hygrophila polysperma, bronze Crypt and Java Moss. The tank is still cycling but I somehow have a stocking list in my mind, which will be something like this: Pair of Honey Gouramis, 6 Mosquito Rasboras, 6 Neon tetras, 6 Pygmy Cories.
There are lots of pond snails in the tank that came as hitchhikers from the plants. Some Apple Snails will be added and a two Nerites. Lights are two 20 watt CFLs, one will be replaced with a bigger wattage light soon. A piece of driftwood will be added. There's an internal filter in this tank too, a bigger one rated under 175 gph. I don't think both of the filters really pump 650 gallons per hour, but whatever I love them.

Products Used
When it comes to products, there aren't lots of fancy produts readily available in Albania. I don't use a API Master test kit, but I use the strips I got as a present from a member instead (many thanks to Everythingzen). I use Tetra Aquasafe as a water conditioner and the traditional gravel syphon cleaner.

The Future
In the Future I have a lot of plans and hopes for the future regarding the hobby. I really love and hope I will have a tank of 75 or more gallons, and what I want to put in it are goldfish. I love these fish. Of course that these wont be the only tank, but it's my biggest dream at the moment. Last but not least, I'd like to thank everyone here for all the great advice. I'm blessed to be around here and I went from being the total newbie, with no decent information at all, to giving advice to new fish lovers. It's such an honor to be nominated member of the month, I never thought I would!