Obviously named for its translucent flesh, the glassfish is an interesting, slightly odd addition to the right aquarium. They are a schooling fish, and prefer to be kept in groups of five or more. They can be kept in smaller numbers, but they will be shy and will spend much of their time hiding. Even when kept in larger numbers, they tend to not be aggressive, though they can get to be very bold and energetic. 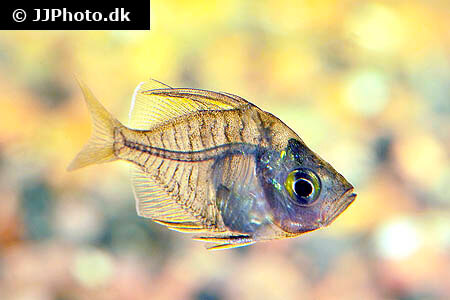 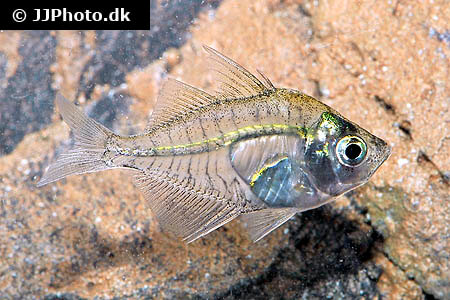 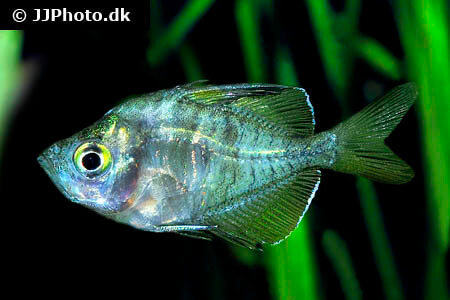 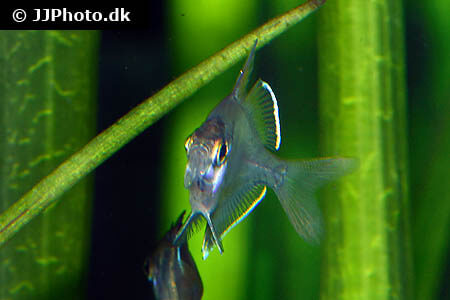 Glassfish have a reputation for being difficult to keep alive, but this belief largely stems from the myth that they require brackish water to survive. In nature, these fish live in standing water such as bodies created from dammed mountain streams, not estuaries or other areas of brackish water. If they are kept in true freshwater, they seem to be fairly hardy fish, no more difficult to keep than many tetras. 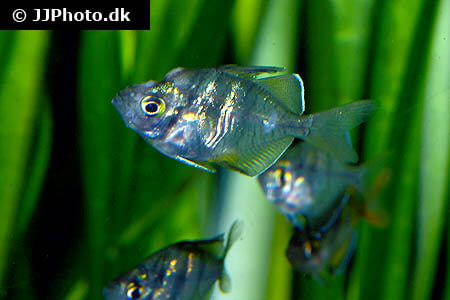 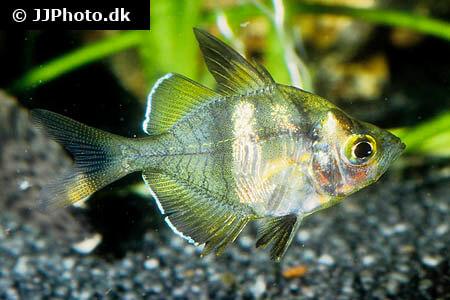 I am currently unaware of the difficulty of breeding them in the aquarium. In the wild, they breed prolifically during the rainy season. If the tank's water temperature is raised to 85° and the fish are fed a healthy diet of high protein food, they may be induced to breed in an aquarium.

One particular note about them is that, due to their transparent flesh, they are often injected with fluorescent dye. The result is a fish with fluorescent dots floating in its body. Most of these fish do not survive the dyeing process, and those that do are four times as likely to develop certain viral infections as undyed glassfish. For more information on this, check out the article on dyed fish.

Breeding / Mating / Reproduction: To induce spawning they need slightly brackish water conditions with elevated temperatures. They may place eggs on plant leaves. Raising the fry is another story all together. Considered difficult.

Tank Size: A few specimens could likely be kept in a species-only 10g. 20g and at least five glassfish is preferable.

Tank Mates: Many. Would likely make excellent dither fish in groups of five or more. Would also make good "target" fish for species that get aggressive during mating. They are very fast swimmers, and also seem to be playful. Obviously, avoid predators large enough to eat them. Purely aggressive tank mates may not be the best choice, though they may do well in a tank with semi-aggressive fish and plenty of hiding places.

Fish Disease / Illness: Freshwater Fish Disease page includes symptoms, diagnosis and treatment info. Only painted glassfish seem to be particularly susceptible to any particular disease. Painting seems to encourage ich and fin rot immediately after paining, and makes the fish more likely to develop Lymphocystis, a viral infection that causes white cysts on the body and fins, throughout its life.

Food / Diet: Frozen or fresh, mostly carnivorous diet. Generally do not eat dry food, according to several sources. That being said, I have fed mine nothing but flakes and freeze-dried bloodworms, and they are always eager to eat.

Tank Region: Supposedly mid to bottom. This may be a result of lethargy induced by brackish water. In purely freshwater tanks, they range across the entire depth of the aquarium.