Beeker here, and here comes the nutshell story of my fish keeping life.

As an animal lover, I always have a tug in my heart to rescue animals that would meet a bitter end without my intercession. Naturally, when my father in law mentioned flushing the little feeder fish that he used in pond in the Christmas village he built, I jumped in and said I'd take them. All I needed was a small tank and water, right? Ha!

The feeders were goldfish. I took six of them home in a jelly jar. The fish were smaller than my pinky finger. I figured a little gallon tank should do it. Yes, I hear you all gasping now. Please keep in mind that I had absolutely no background in fish keeping and I only spoke to the ever so knowledgeable people in the fish department at a big chain pet store which will remain nameless. I bought a book on goldfish which was not very informative at all. Eventually, I found a 10 gallon, which they quickly outgrew, of course, and I ended up losing one at this point. I then made the leap to a 75 gallon tank. All five went in and we had to go through the difficult task of the cycle. These fish must have been going through constant cycling with my father in law, and the first few months of small tanks with me. All five made it through and were growing very quickly. But all the while, I had no idea what they were going through. I felt that something wasn't right, that there was something important that the book wasn't mentioning. When I finally started looking online, I realized what I was doing wrong. I finally learned about the cycle. My heart sank over learning what those poor fish went through. There wasn't any way I could make it up to them, but I did want to do something to make it up to the fish world in general. I decided to put together a tropical tank. I took my old 10 gallon tank and set it up. I bought some pure ammonia and did a fishless cycle. It took about a month to cycle. Everything went perfectly, so I rewarded myself with my first betta, Charlie. 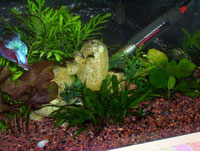 I was so thrilled with him, and so in love with the pictures I was finding online of the beautiful tropical tanks with live plants, that I quickly developed MTS. I got a 20 gallon long tank to cycle and plant. I ordered certain fish online, Sparkling Gouramis, Kerri tetras, and Kuhli loaches, and was sent the wrong ones, GBRs, so I had to get another 20 gallon to house them. Eventually, the stock was reorganized, Kuhli Loaches were from bad stock and all died, GBRs didn't last long (I guess the tank was too new for them), and was able to fit into one 20 gallon tank, giving me the opportunity to put one into storage. 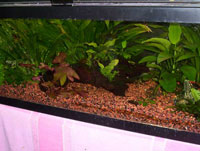 Then one day, during a water change on my goldie tank, I found my first fry. It was already recognizable as a small fish. It had to be a month old at least. Figuring it was strong since it had survived that long in with the adults, I took my spare 20 gallon back out and rescued it. I watched carefully for more eggs. For a while, I was getting eggs almost every week! I was very happy to know that my fish were content enough with their home to want to breed so often. I did save more eggs and, after the process of natural selection, two came forward as the strongest and healthiest to be put in with the adults, but I had to stop saving eggs when I realized I had over stocked my tank. They didn't seem to mind that there were eight of them in the tank. They just keep laying eggs!

Now, almost 20 years later, I have four goldies, two of which are the great-grand fishies of the original six I rescued from the flush that day. The tropical tank is no more. The former tropical tank is now the nursery for my goldies. They are almost big enough to put in with the two adults.

Come March 30th, the beginning of the $1 per gallon sale, I will be purchasing a 30 gallon tank and starting a new tropical set up again. The 20 will get put back into storage.