Introduction
Hi, my name is Josh. I started in the hobby as a kid - we had a couple of tanks and a pond. I kept an albino channel catfish and a crayfish, along with a rotation of other fish in a 10 gallon, which was my tank. I certainly didn't learn from my mistakes at that time. Years later, I had a roommate that mentioned something about getting a fish tank for the house, and that's all it took to get me back into the hobby. So I got one, then a couple more, then three more, and so on and so forth until I had 18 tanks running. It was a big house :) The internet was instrumental in my development and success as a fish keeper this time around. Fishlore has been a big part of that.

Practices
I feed all of my fish NLS thera A exclusively, once a day most days. Occasionally they get fed twice in a day. It's been 3 years since they've eaten anything else.

I use an azoo power head 1800 to do drain the tanks and a python to refill them; I change 80% of the water. Pumping the water out allows me to drain one tank and fill another at the same time, taking significantly less time.

ALL new fish are given a heat treatment for ich while they are in quarantine. Quarantine lasts for about 3 weeks. I group the fish that are going in the same tank in the same QT.

All tanks have malaysian trumpet snails. Some have more than others :)

All tanks are unheated. The ambient air is warm enough to not require it. The massive filtration systems also heat the water a few degrees above room temp.

I run opposing canisters on all the bigger tanks. One filter pushes the water across the front of the tank and the other pushes it back along the back. This creates a circular flow within the tank, which keeps it in pristine condition.

I do not use activated carbon. I stopped when I switched to custom media, and haven't noticed any reason to resume. I use ceramic prefilter media, then mechanical, then biomedia. I clean the filters no more than a few times a year.

I don't ever test the water and don't own a test kit. I believe in routine and observation. 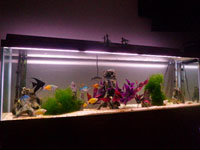 125 gallon cichlid community - Filtration is a Rena XP4 and a Aquatop CF500. Pool filter sand substrate. Plants - java moss, frogbit and anubias. Stock is boesmani, yellow, turquoise and irian rainbows, denison barbs, a black veil tail angel and a red severum. Golden wonder killis will soon be added, once I have more females to keep the males attentions....otherwise they try and mate with the yellow rainbows. Also on the list are angelicus loaches, some more cichlids, 3 spot gouramis and maybe a black ghost knife. 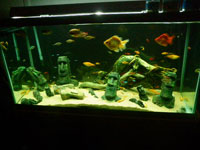 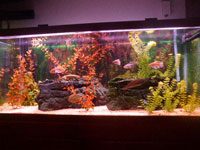 75 gallon african community - Filtration is an XP3 and a CF400. Sunset gold sand. Stock is a brown knife, senegal bichir, african butterfly, spotted ctenopoma, featherfin synodontis, and congo tetras. On the list are madagasgar rainbows, a kribensis and/or a jewel cichlid, and maybe a spiny eel. 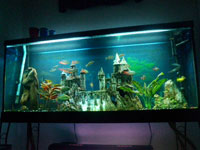 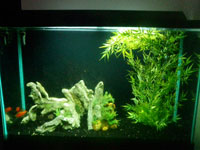 45 gallon semi empty tank - Filtration is a fluval 405. Tahitian moon sand. Stock is bolivian rams and rosy barbs. On the list is.... I don't know. I was thinking about getting a crayfish again. 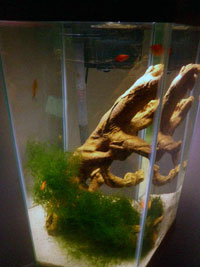 30 gallon hex semi empty tank - Filtration is an AC70. Pool filter sand. Plants - java moss. Stock is platys. I'm not sure what to do with this tank. Since it's a hex, the fish have to be small. 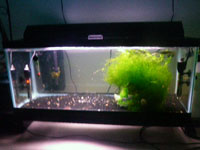 20 gallon long quarantine tank - Filtration is a HOT magnum 250. Some moon sand. Plants - java moss, naja, frogbit. Stock is currently freshwater flounder. If they make it through quarantine, I am going to make it a grow out tank, otherwise it will become a QT again. If they grow out, they will go in the 125. 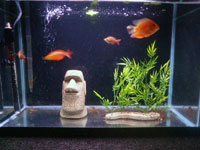 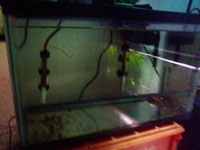 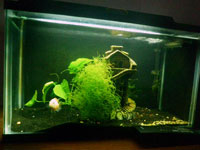 10 gallon species tank - Filtration is a tom rapids mini canister. Moon sand. Java moss. Stock is a pink female convict. I threw a bunch of fry in the 75 as feeders and she managed to survive. She is very small, probably due to a lack of nutrition during the growth stages. Once she was the size of end of my pinky finger, she was causing problems in the 75. I moved her to the 55 but she dominated the chanchitos, which were almost big enough to eat her. So in the 10 she went. I'll probably have to upgrade at some point. 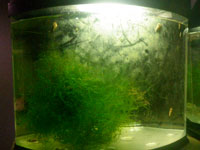 5 gallon whatever tank - It's a marineland corner. Bare bottom ATM. Java moss. Stock is an african dwarf frog. I might get a betta for it, or some nano fish.

My tanks are virtually algae free; it's like they are impervious to it. One time I had a clump of beard algae growing on some decor and I thought of it as a plant. I do have one tank that has a minimal amount on the glass, but it gets direct sun every morning.

Goldfish are my favorites.

Plants and decor
I am tentatively trying live plants. I have mastered java moss and have moved on to anubias, frogbit and naja. I haven't killed them yet...

All of the decor is artificial, except for a piece of driftwood in the 55.

Future plans
I have no plans for any other tanks, though I have been toying with the idea of converting the 55 to a SW tank.