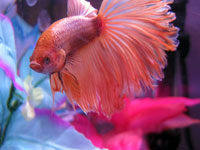 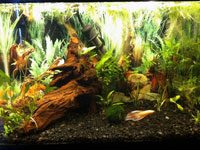 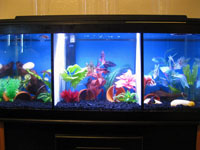 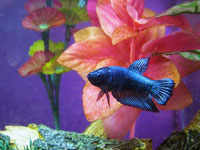 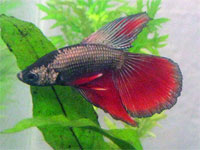 Hi, guys, my name is Danielle! You may know me better as Akari. I'm 18 years old, and in my 2nd semester of college, studying Pre-Vet. I enjoy, when I'm home from school, taking care of my 3 wonderfully crazy dogs, and the tanks I have set up for my mom. When I'm here at school, a lot of my time is dedicated to my job, and my schoolwork, but I never have too much time to care for my tank, and spoil my fish. No matter where I am, I like to watch shows like Criminal Minds, and FullMetal Alchemist, playing video games, reading books, and finding uses for random objects, for my fish tanks. I got started in this wonderful hobby in the strangest way...

How it all Began
When I was about 12, I was looking for an interesting, fun pet. I decided on a gorgeous young female Pacman frog, which I named Hanyou. Unfortunately, we got her from a poor source, and she lived a short, but good life. Still wanting to stay in the frog business, I did a lot of research, and decided on a 1.5 gallon tank, and 2 African Dwarf Frogs, completely from scratch. Kari and Starr, as they came to be named, were the perfect, comical little additions to my life. Then, through a strange, and way-to-complicated-to-type-out series of events, I ended up an avid Guppy breeder, and soon upgraded to a 20 long, and several smaller grow out tanks, ranging from 3 to 10 gallons.

During that time, I also had a few Bettas here and there, in those horrid little "Betta tanks." After the last one died, I took a Betta-break, and concentrated on my Guppies. I got a strain of my own to breed true a few times, but soon realized that I had too much going, and not enough money of my own, or the space needed to keep my breeding program going. I sold all my females, and all but a very few of my males. The 20 long was then turned into a community, and went through several stock changes in just a few years.

Somewhere during that time, I learned that how I had housed my previous Bettas was cruel, and I decided to do it right that time, and set up the 1.5 gallon once again, seeded this time, and bought a gorgeous, blood-red Crowntail, named Cornelious. He hated everything that moved, especially me, but I loved him any way. His favorite snacks were Guppy fry and bloodworms. That one Betta has started something that I never imagined. Since then, I have never been with out at least one Betta in my life.

Pretty soon, I found FishLore, and I've been here ever since, learning new things everyday, and helping others as they travel down the same road most of us have traveled, each taking their own paths. In February, I'll have been here two fabulous years, and I've loved every minute of it.

My tanks
Over the years, I've had several different set-ups, including a few El Natural Betta tanks, and tanks ranging in size from 1.5 to 29 gallons. I currently have so many fish, that I probably can't count them all, including 3 fair-rescued goldfish, who live in a wonderful pond, a female Albino Bristlenose Pleco, 2 Bettas, 6 Cherry Barbs, and several Guppies, that all live at a friends house, to cut down the load on my mom while I'm away.

My mom cares for two tanks. One, a 20 long, set up in December of 2011, is divided 3 ways, with a male Betta in each section. Their names are Hotaru, a white and brown marble delta tail, Ryuu, a blue and orange King, and Katsu Kaida, a copper dragon delta with red fins. There is an AquaTech 5-15 and a Tom Mini, for up to 5 gallons, on this tank. They are fed once a day on New Life Spectrum Betta Pellets.

The other is a 10 gallon, heavily planted, with an AquaClear 20, and houses around 5 Least Killifish, 3 Endlers, a Clown Pleco, 3 or so Red Cherry Shrimp, and a male Veil tail Betta, who is yet to be named. This tank was the tank I moved to college with, and spent nearly $200 gradually building it up and stocking it to be the perfect small tank. The center piece was originally a wonderful male German Blue Ram, who unfortunately succumbed to the high ammonia nastiness that is the tap water at my moms house, with no way for me to help him. Every day, the fish are fed New Life Spectrum Betta Pellets, and every other day half of a New Life Spectrum Algae Wafer, for the Pleco and shrimp. This tank has been set up pretty much constantly for about two years, but these inhabitants have been in the tank for just a few months, at the most.

My mom loved the 10 gallon, and wanted it for herself, so she sent me back off with just a Marineland Eclipse System 3, and a single male halfmoon plakat Betta, with a promise that I wouldn't buy anything for it. I seeded it from the 20 long, and stole some plants out of the 10 gallon. The promise lasted about 3 weeks, until I found an intact and wonderful 5 gallon hex for just $8. Who could pass that up? Now, I have Red Cherry Shrimp, baby Mystery Snails, and live plants on the way, and I can't wait to get them! Right now, with just the Betta, I feed a mix of New Life Spectrum, Hikari Cichlid Bio Gold, and a random assortment of trial sized packets of betta pellets, once a day. Some of this mix is kept in a small, 4 oz, tubberware, and the rest is stored in a zip-lock back.

The 10 gallon has an assortment of live plants. Dwarf Lily, Dwarf Sag, Aponogenton, Guppy Grass, Water Lettuce, Duckweek, Crypt Wendtii and Balansae, Narrow leaf and Wendelov Java Ferns, Wisteria, and perhaps a few others. There are two compact florescent bulbs, each the equivalent of 60 watts, and Flourish Root Tabs are used to give the plants an extra boost.

The 5 gallon hex has Pennywort, Guppy Grass, Argentine Swords, Crypt Wendtii, Dwarf Sag, and Duckweed. Currently, the lighting on this tank is quite pathetic, with a single 15 watt incandescent bulb. Root tabs will be added when the new plants arrive, and hopes to upgrade the light to a compact fluorescent sooner rather than later.

In the future
I have so many hopes for the future, regarding fishkeeping. A large, 75 gallons or more, Ryukin Goldfish tank, and an even larger out-door, natural, Koi pond are high on the list. I also have a 55 gallon tank waiting for me at a friends house, that just needs the side panel replaced. A planted community comes to mind when I see it. I want to try something fun, and different, and get out of my comfort zone, a bit. I hope to delve into the realm of Salt Water, though where I start when that happens, I couldn't say. Still, maybe some day, the reality show "Tanked" will build me a 200 gallon Amazon Biotope, free of charge...

Special thanks to...
I would like to thank all the wonderful people of FishLore. NMfishman, Harpua, Jaysee, RogueAgent, all the Mods, and so many more. You guys are awesome, and have helped me, and so many others on this, some times rough road. My friend, as well, for taking in my rescues, and allowing me to leave so many of my fish with her until I can get my own place. And, lastly, my mom, who has supported me, for the most part, the whole way through, with not only her wallet, but her own living room space, a second bedroom, and lots of moral support by helping me grow in this hobby. Bellow are some more pictures of the fish and tanks I have had over the years. Enjoy. 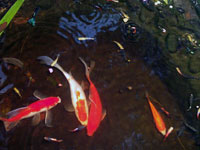 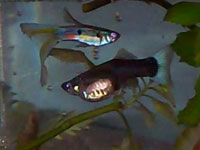 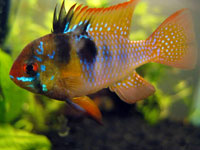