All about me hmm? Well I suppose that's a relatively easy place to start. I am currently a 2nd year University Student at the U of S in Saskatoon Sk. I grew up on a farm in rural Saskatchewan with my horses, cows, and can't forget the sheep. Some of my favorite pastimes are riding my four horses, if I'm not doing that or helping my parents on the farm then I'm usually reading. Reading and writing are two of my favorite things to do. I used to try and write novels but I've never managed to get the full story in my head down on the paper, maybe one day I will till then I'll keep on with my poems.

As I'm writing this I'm being watched by 6 of my 8 Bettas and being ignored by the 3 Bronze Corydoras in favor of hiding out under the driftwood. So how does a farm girl get interested in fish? Well... I blame one of my best friends. Living in res near the end of 1st year she decided that she wanted a fish so my other friend and I went with her to PetSmart and we all came home with tanks and fish.

Needless to say poor the goldfish 1 and 2 (yes those were their names) didn't last very long in their 2.5 gallon un-cycled hex tank. So a week later I packed the tank up and that was the end of it, might even have stayed that way if not for that summer course. I was feeling lonely, and physics was frying my brains, so I dragged the tank back out and set it up then went to get my fish. A Red Tail Shark, this time at least I did a bit of research before I got him, though I figured I'd just upgrade his tank as I went.

After I had him for a little while I decided that I wanted another fish, something low maintenance (wow. I was afflicted with MTS before I met all you enablers :p). A Betta seemed to fit the bill and that was when I brought Coolie home, my first Betta ever. A few days later I found Fishlore and the learning curve has been a steep one ever since, who knew a Betta needed a heater and filter?

That was about 6 months ago. Since then the 2.5 gal hex tank that Red started in has sprouted 2 more 2.5 gal tanks, One 3 gallon tank, 3 five gallons, 2 10 gallon tanks and most recently, at 32 gallon aquarium. Coolie's tough guy antics have spawned a love for Betta's that is pretty much the justification for every tank but two. One of the 10's and the 32 gal I blame on my Red tail shark (Red) who I love and adore and am ignored by, despite all of my affection. (The Betta's are quick to capitalize on this rejection.)

I've faced mystery illnesses and cracked tanks, impulse buys and the resulting "opps now what do I do with you" moments (three cheers for extra mature gravel and sponges!). And I wouldn't trade any of my time spent on them for the world. So what does my future look like? Well expanding the tanks (my MTS will not be slowed); there are a lot of really neat fish out there that I would love to have (I hear the brackish tanks calling my name). This summer I'm considering (no decisions yet) trying a Betta spawn to see if that's a part of this hobby that I'd like to get into. Researching Betta breeding has introduced me to the huge array of Wild Betta Species available and I'm planning to get involved with the IBS-SMP (International Betta Congress - Species Maintenance Program), the three main species I'm interested in are (in order): Betta sp. Mahachai , Betta Rutilans, and Betta hipposideros.

My advice for other fish-keepers? DIY! I love the planning even if I never actually get it done! 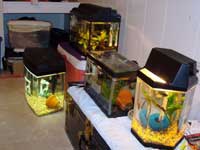 I've got a mix of filtration going on here right now, there's a canister filter on the 32 along with a home-made "box" filter since the canister and I are having some disagreements at the moment. On the Betta tanks I've got a mix of everything going on. There are 3 HOB filters: (Nighthawks tank (aqua-tech), Babie's tank (Aquaclear 30), and Firefly and Patch's tank (Aquaclear 20). Coolie has a stingray 5 in his tank that I'm quite fond of. Mama has a box filter, Mer is running with a home-made sponge filter, and Ember has a Whisper 3-5 gal in his tank.

For feeding - my Betta's are all fed 2 times a day and I try to change it up between pellet, freeze dried bloodworms, and some flakes as a treat. My red tail shark is fed once a day with tropical flakes and the Cory's get a shrimp pellet. I think that covers it.


Well that is pretty much everything about me. So I suppose I should take a moment now to thank everyone who's made this moment possible. I would like to thank Megan for dragging me to the fish store last year (you regret it now don't you lol). Mike for starting Fishlore, and all the members who make if such a wonderful place to be. I'd like to send special thanks to all my enablers on the Betta forum, I'd have more spending money and fewer tanks without you but I have no regrets. I would like to thank my parents for not having me committed yet, and I would also like to thank them for their understanding when the end of the semester comes and you have to help me more all the tanks home for the summer then back up for next year. I have to send a HUGE early thank-you to my Mom, because thanks to her I get to go to Ireland for a month, while she stays home and takes care of my fish. It will be stressful for both of us and I love you even more for it.