The Dwarf Puffer in many ways can be called the ideal puffer for most aquarists. The Dwarf Puffer lives in freshwater, originating from inland India. The most convenient aspect of these fish is that they are very small, only getting an inch long, and thus one can be kept in a 5 gallon tank, unlike most other puffers which require much larger aquariums. 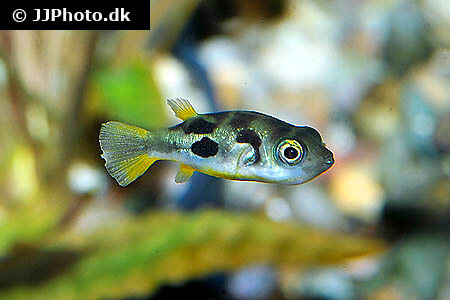 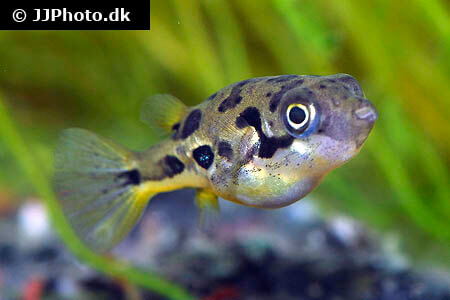 They also have an advantage in the eyes of many aquarists in that there is one fish that is pretty much guaranteed to work with them: otocinclus catfish. Dwarves seem to leave otos alone and let them do their job, unlike most other fish which they pester and nip.

Sometimes you can keep larger shrimp with the Dwarf Puffer, but sometimes they'll end up as a snack. It's basically a gamble with shrimp. There are very limited amounts of success keeping these puffers with other fish. Most fish are either too large and can swallow the puffers whole, and the rest will likely be nipped quite a bit and harassed.

For example, as an experiment I had some cories with my dwarf puffer. They were fine for about 2 weeks, until one day I noticed that one of the cories had little chunks missing from all of his fins. Needless to say the cories moved away. I have my puffer with a ghost shrimp now, and as of yet he is still alive.

Dwarf puffers get bored easily. A good tank setup for them is five gallons per puffer, sand substrate, heavily planted with live aquarium plants, and more hiding places than puffers. When kept in groups this is particularly important as they can be quite territorial.

It's also recommended to keep a ratio of 1 male to 2-3 females. Females are generally more round than the males, and, when mature, males have a dark line down the length of their belly and often have iridescent "wrinkles" on their faces.

Breeding has occurred in captivity, but it doesn't happen often, and seems to occur without the aquarist doing anything to promote it. This puffer seems to be more prone to shyness than larger puffers like the Green Spotted Puffer and Figure 8 Puffer, probably just due to their small size and likelihood of being preyed upon by larger fish.

They will usually eventually come around though, even if it takes several weeks or months, and show that "puffer personality" that is one of the best parts of keeping puffers in my opinion. 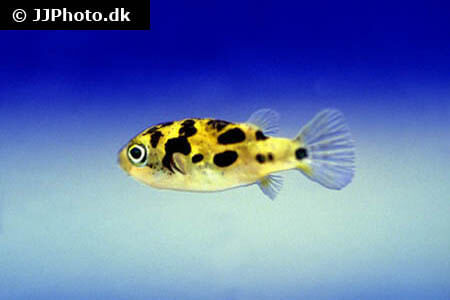 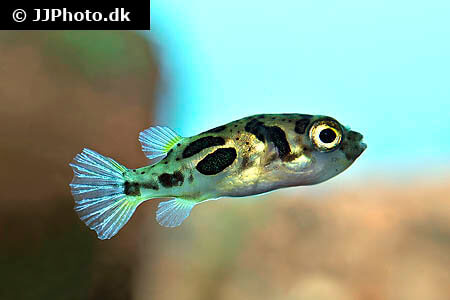 These dwarf puffers can be rather picky about their food. Most will accept frozen bloodworms, snails, and live blackworms. Other foods include all kinds of shrimp as well as daphnia.

As with all puffers, they are very sensitive to water conditions, so 0 ammonia, 0 nitrite, and very low nitrate (preferably below 10ppm, but no more than 20ppm). Careful acclimation is also advised. If you are looking for something exciting, unique, and challenging, the dwarf puffer might be for you! 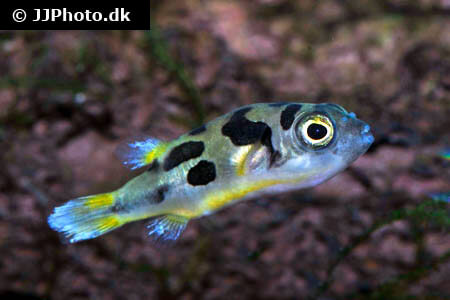 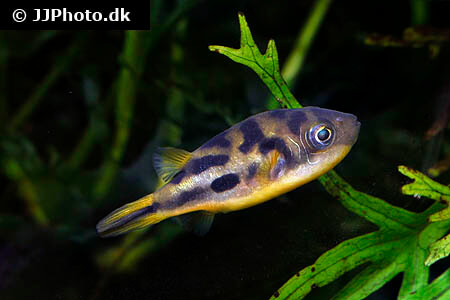 Breeding : A relatively small number of spawnings have occurred. Keep a ratio of 2-3 females per male.

Aquarium Size : Provide about 5 gallons per puffer due to their territorial nature.

Tank Mates : Can be kept in groups if adequate space and decor are provided. Do well with otocinclus. Slow moving fish and fish with long, colorful fins will be nipped and/or harassed.

Fish Disease : Freshwater Fish Disease Be sure to quarantine, as they are often wild caught and often come in with parasites.

Gender : Females are rounder and larger than males. Males have dark line down the length of their bellies when mature, and sometimes have iridescent "wrinkles" on face.

References:
- Aqualog: The Puffers of Fresh and Brackish Waters by Klaus Ebert

About the author: See pinkfloydpuffer 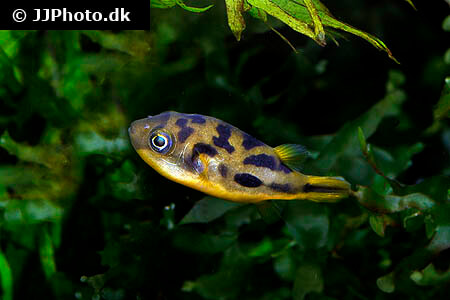 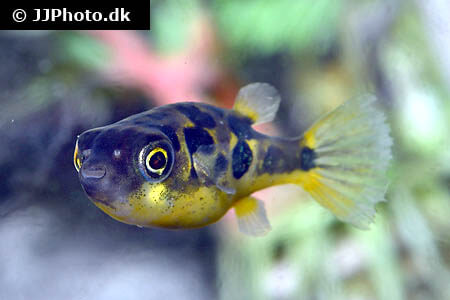