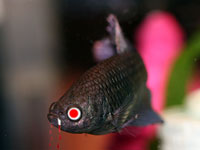 One of the most dangerous tropical fish to keep - the Vampire Betta was bred from Betta Splendens stock during the middle ages when everything was dark (no electric lights). The vampire betta retains the beautiful fins of their Splendens ancestors but posses a desire for blood, not bloodworms.

You MUST have a solid hood with NO openings in it or your family and other pets are in grave danger. A little-realized trait of the Vampire Betta is their ability to transform into a small bird resembling a Canary. Many a dog or cat has fallen victim to the voracious blood-lust of a Vampire Betta. Poor Timmy Snotrocket of Desolation, Nevada woke up dead when his Vampire Betta got out of the tank.. sadly, they had no other pets so little Timmy was the midnight snack of his Vampire Betta "Cuddles".

It's recommended that you keep a Vampire Betta in a filtered and chilled tank of at least 15 gallons. If you keep yours in a smaller tank, you'll regret it. You do NOT want to make these guys angry - trust me!

Care Level: Extremely difficult, recommended for only the most stupid fish keepers.

Lifespan: unknown, but thought to be the typical undead life span.

Temperament / Behavior: Peaceful if given the right food. They will become aggressive with other pets, small children and especially mimes. They prefer a diet of small, cuddly animals, but will accept gelatin blood pellets during the waning phase of the lunar cycle.

Breeding / Mating / Reproduction: Can be difficult since they're undead. Occasionally they'll reproduce by biting a Betta Splendens and injected the Vampire toxin into the victim. Caution: The new Vampire Betta will feed immediately on the first living flesh that it finds!

Diet: Carnivore, preferring other fish but will accept cats, dogs, your kids and gelatin blood capsules.

Betta Tank Size: Can be kept in small tanks as small as 2 gallons but they really get in a bad mood if you don't give them at least 15 gallons.

Tank Region: Wherever they want

Common Diseases: Stakes through the heart and Garlic poisoning.


Dave (COBettaCouple) started in the wonderful world of Bettas and fishkeeping the Saturday after Christmas 2006. I gave Stacy a Betta for a Christmas Present (Super Mario) and after a rocky start we found what a great community FishLore is and now we have 6 betta splendens, 7 betta mahachai, 4 balloon platys, 4 platys, a roque gang of shrimp and a partridge in a pear tree (well one of the bettas ate him last night) in 9 tanks.