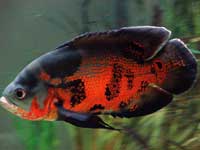 Hello Fishlore, Bryan here, better known as Gozer_1 and this is my fish story.

One of my earliest childhood memories is of the two tanks my parents kept, a 10 and a 30 gallon freshwater. All I really remember is the monster Pleco and Cardinal Tetras. Those tanks gave me an appreciation for the hobby that never faded even though I was only 6. We moved and lost all the fish and my parents never picked it back up so it was up to me. One of my first purchases when I started working was a 30 gallon tank. It was much like the ones we had years ago, Tetras and a Pleco I hoped one day would be a monster like the one I remembered. I had to give that tank away after awhile because I couldn't keep it anymore. It made rounds through a bunch of my friends who had the space but the fish died off with each move and eventually it vanished from this earth. I was 21 and was much more concerned about a great many other things.

In 2005 (7 years later), my girlfriend at the time and I decided we wanted a fish tank, so we went to Walmart. (Oops) She picked out these fish that were "So cute" and I read the labels. This was it. This was my chance to have the monster fish I had always wanted. She picked out Iridescent Sharks and Colombian Sharks. "Oh they are cute", I said. "We'll have to get a bigger tank one day", I said. "Ok", said she. I did it. I'm getting my huge fish. We picked up a 5 gallon to keep them in "Till they got bigger" and proceeded to majorly overstock that poor little tank. Within a few months we were seeing our mistake take shape. We started upgrading. First 10 then 20, 30, and 55. They just kept growing. Eventually it was split in to two 55's. After a lot of chaos and change in lifestyle (I became single) I started focusing on my fish and getting them what they truly needed. Enter FishLore. I had to know what I was dealing with. I started reading and quickly found out what a mess I was in. I upgraded one 55 to 150 gallons and began transitioning the Colombians to a brackish tank in their 55. Eventually the Colombians got too big and 2 of 3 jumped to their deaths. The last one did very poorly after that and started getting banged up on the rocks really badly. He got very badly injured and I had to put him down. With that, I had a fully Marine tank full of somewhat live rock and nothing else. Now that tank is a full fledged reef tank, the 150 is overstocked lol and I have a 45 planted and a 5 Betta. MTS is fully set in. 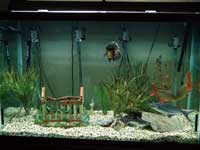 No time like the present. We'll start big and work down. The 150 is now home to 2 Iridescent Sharks that are much larger than the 10 inches their tag said, 3 Tin Foil Barbs, an Oscar and a Raphael Catfish. I need more room but am pretty much stuck with 150. As the sharks get bigger the tank seems exponentially smaller. They have enough room for now though. I run a Rena Filstar XP4 and a UGF. I plan to remove the UGF in Spring and will add an XP3 if needed. I've had more algae outbreaks since adding the UGF than you can shake a stick at. 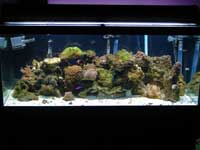 On to the 75. This tank is the evolution of the Old Colombian tank. It's a reef tank home to a Tomato Clown, 3 Blue-green Chromis, a Purple Pseudochromis, a Lawnmower Blenny, a Banded Coral Shrimp, a few Blue Leg Hermits and a slew of snails. Not to mention the Mushrooms, Zoos and such. Of those, I have Red Mushrooms, a Green Mushroom, a Lavender Mushroom, Colony Zoos, Green and Pink Star Polyps, Snake Polyps, Green Button Polyps, a Kenya Tree, a Fox LPS and a group of Zoos I have no name for. Still a work in progress, but almost finished.

I'll be running a DIY sump filter soon and have used Filstars to this point. I use PC fluorescent lighting and a Remora skimmer. I use a wide variety of Seachem products as well as a couple Kent Marine and Coralife products. My parameters are fantastic and I take great pride in it. My only water issue is with Phosphates but that's a battle we all face. Turns out you should clean your sand bed. LOL. This reef has been the biggest learning experience for me in this hobby and FishLore has been key to my success. 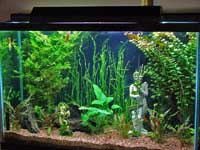 Next is the 45, also credited to the help of FishLore. It's home to Wendtii Crypts, Water Sprite, Ludwigia, Contortionist Vals and an Anubias, as well as 2 Gold Gouramis, 6 Emperor Tetras, 2 Male Guppies, 2 Cory Cats, and 3 Otos. Some FishLore members helped me pick the Lost City theme and helped me understand what I was getting in to with live plants. It's been running for a few months and all the advice is paying off. My tank is a full blown jungle and the fish love every bit of it. I use an XP3 for filtration, a Nova Extreme T5 fixture and a standard 15W fixture for lighting. That gives me about 2 WPG. I use Seachem supplements and am considering a small CO2 setup to give a little boost. I use Flourite substrate also. 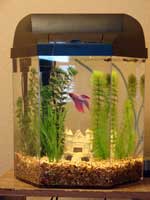 Last and least only in size is my little Betta. He recently got a much needed upgrade from 1 to 5 gallons. He lives in an Aqua-Tech hex. I plan to replace the incandescent bulb with a CFL so I can use live plants but for now it's all fake. He doesn't mind though. 4 extra gallons of space is more important to him lol. One of these days I want to divide a larger tank into multiple Betta spaces. Someday lol.

There's no telling what the future holds but I think my MTS is satisfied for now. I would like to open an aquatic supply store one of these days. Wouldn't mind being the "crazy ol' fish guy". We'll see how that goes. This town is barely the two LFS town it is now. Not a big market. Who knows though, right.

In this hobby, knowledge is truly power. You can never know everything but you can try. The most important lesson I can convey is Do Your Research. Read everything you can find and ask every question you come up with, then make your purchase. Knowing is half the battle, right. Good research will make your fish keeping experience much more fulfilling and easy. You have a wealth of information available right here at FishLore.com


I wanted to end this with a nice thank you list. So many have helped me and I wouldn't be where I am today without them. Firstly I want to thank my Ex-girlfriend for getting me back in to the hobby even though she picked out the Iridescent Sharks lol. Joking aside, I truly want to thank FishLore and it's members. I wanted to give a list of names but realized it's a very long list and I would feel way too bad if I left out a single one. There are so many great people at FishLore so I'll leave it at Thank You All. My tanks are your tanks. Also thanks to the roommates who've had to deal with all the buckets, sink time, grunge in the shower, and the occasional wet floor.

Thanks for the Spotlight. I enjoyed putting it together. Now I'm going back to stare at my sump as I wait for UPS to show with the last pieces of the puzzle.