Background:
Hello Fishlore! Most of you know me as Rivieraneo, though for those who I've had the great pleasure of building a relationship with both on line and in person, know me as Neo. I've been happily married for 15 years and have two beautiful daughters whom are just as enthusiastic about fish keeping as I am. For many years, I did not own an aquarium, call it apathy or procrastination, but having given it some thought, I've realized that for the many years out of the hobby, I still vicariously kept fish through the hands of family, co-workers, and friends.

Introduction:
Before I continue, I must say that the last time I wrote about myself, the only response I got was "Guilty!" so I need to be careful, as you get to know me, you know that I like to interject humor is able to do so respectfully. As a child, our local church had a large Koi pond that was kept near the front entry way where one needed to cross a bridge to access the Church's main doors. This pond always captured my attention, so much, that I stood out amongst the crowd of church goers to a female church member who took charge of caring for the Koi and maintaining the pond.

I recall during one Sunday, I was waived over by this female to come over to where she was. When I arrived pond side, she handed me a handful of cheerios to feed the Koi, Oh! The excitement and amusement as these two foot aqua puppies kept coming to me for more cheerios, this memory still brings me the same joy I felt as a child today. I tried to visit the pond during most of our future trips to Church and spending time with the Koi taught me at a young age to learn that fish weren't just creatures turned into sticks for a frozen TV dinner, I bonded with these large Koi and gave them each a name.

A few years later, our family procured our first aquarium. I recall it being a 30 gallon glass tank that my mother brought home from the flea market which included some basic blue gravel, a small loud rattly air pump, heater, and filter. Excited, the tank was assembled the best way I could configure at my age and so my journey with aquariums started though my love for fish had already been long time seeded. Surprisingly, we kept this aquarium for a few years. I'm not shy to admit that this tank went on to be a glass box of lessons learned by me. Being a young teen at the time with limited access to the local library, limited me from reading books and seeking information on keeping aquariums properly.

Unfortunately, many of our stocking purchases and options were influenced by "what was pretty" or "what fish we thought were cool" and in it went into the tank. This tank saw many species of fish: tiger barbs, guppies, penguin fish, bala sharks, if the local LFS stocked it, at one point it had a home in our tank.

As "lessons" continued to be learned, it prompted me to seek further information on proper aquarium keeping, as my family became more and more attached to these fish, it motivated my parents to take me to the library more often where I would endlessly search the little brass drawers and thumb through the key cards, take a piece of scratch paper and jot down the book number, find the books, and bring them home for the next week to read and learn how to best care for our fish.

Eventually, another trip to the flea market turned up a 55 gallon upgrade. As the aquarium gallonage increased, so did the maintenance, being the oldest in my family, the responsibility of caring for my younger siblings and pets always fell on me. Everyone in the household loved to watch and observe the aquariums inhabitants, though no one enjoyed the task of cleaning or maintaining it. This is where as a teenager, I learned a lot about aquariums through trial and error at the expense of our fish. Eventually, high school got too busy for me to keep the aquarium, and we made the decision to donate it to Goodwill. The remaining fish were donated to the local LFS and off the tank and equipment went to a new home. My reading about fish, pond fish specifically, continued as the topic still interested me and became a matter of habit.

Throughout the years, there has always been some sort of aquarium or pond around me. Family and friends would occasionally call me for advice on pond and aquarium issues as they recalled seeing the aquariums in my parents' home for the years we owned them and all still thought we kept and maintained the same aquarium. In an effort to remain helpful, I still offered advice based on my personal experience on actions taken, lessons learned and knowledge acquired. I'm happy that for the most part, their aquarium/pond conditions improved, fishes recovered, and the phone calls continued.

Fast forward a few years, both my wife and I enjoy gardening, before returning to aquariums, we've together kept many pond/bog water plants as we love the beautiful flowers produced by them, we love the wild life they attract and who doesn't enjoy sitting on their patio next to a water feature. Shopping for supplies for our pond plants upkeep, through the year's we've made friends with shop owners, store employees, and other pond keepers alike. It wasn't until returning to the hobby that I would realize that aside from selling pond and pond plant supplies, these acquaintances also raised and bred fish. Unfortunately, we moved away from the home with our pond and where the pond was, was turned into an extended drive way.

It wasn't until 2013 when my family asked for a small aquarium, I pleaded and tried to convince them, that an aquarium is beautiful to watch and have, but that the constant maintenance and upkeep would be overwhelming for them and eventually the onus of it would fall back on me... Like any caring father, I eventually gave in to their pleads and the hunt for the first aquarium began. Approximately one week later, my wife finds a beautiful 30 gallon Lee Mar aquarium which I had to drive 1.5 hours one way to pick up, great deal, not so great of a drive... The things we do for family, huh? But I'll share that on that long return drive home, it felt different than the drive there, I actually caught myself smiling on the inside, smiling about getting fish and setting up the tank.

This resulted in a trip to a local LFS where my family really liked larger fish. They felt they had more of a personality as did I. This LFS was in the process of closing down and they had a few full grown cichilds they were clearing off the shelves. Unfortunately, we could not bring an adult Jack Dempsey home and the goldfish they did have were infested with disease, the store closed a few days later and the search for fish continued.

Although we wanted a large fish, we decided to stock the tank with fancy goldfish, we stumbled across tosakin, lionhead and ranchu goldfish at a local pond store and we brought home (3) ranchu goldfish. Empowered by the internet and local library, I decided to do some research on fancy goldfish, bought some books, and joined other forums that shall remain unnamed. As many of you have, I also had bad experiences at other forums with the far too common insults, belittling and lack of response to questions from new members. Luckily, I found Fishlore and this has been my home forum ever since.

We eventually got our desired large fish, a 14 inch King Kamfa Flower horn who came to us very ill, though were able to save him.

For those of you that have followed the story of Gossimor the Flowerhorn, you know the story of how we received this fish very ill as part of our 70 gallon Ranchu Goldfish tank upgrade. He now has his own 90 gallon tank for as long as he is with us. 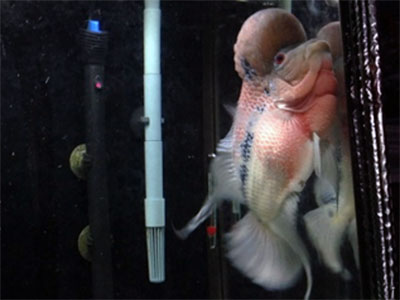 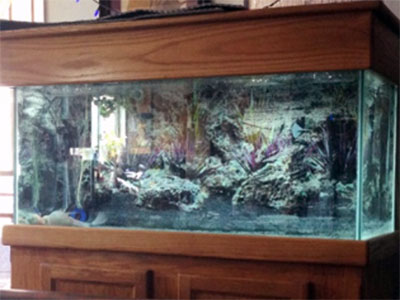 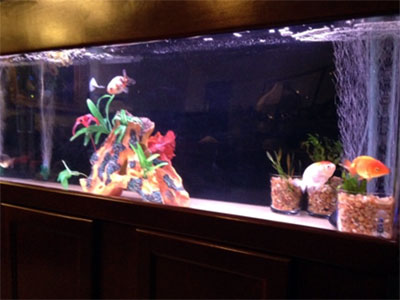 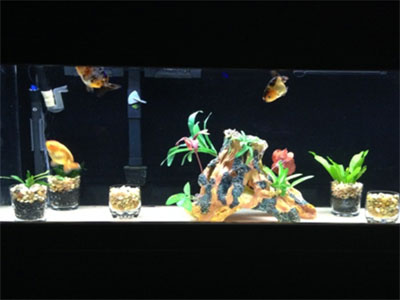 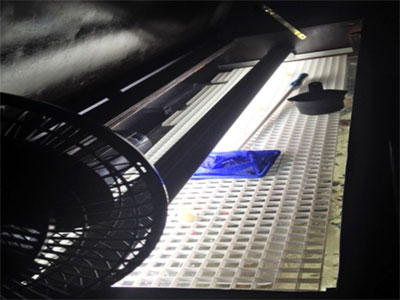 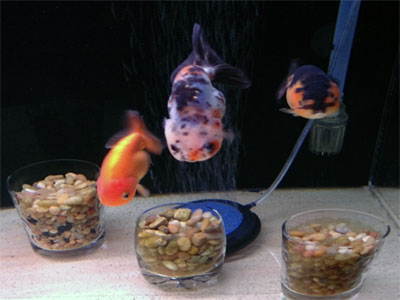 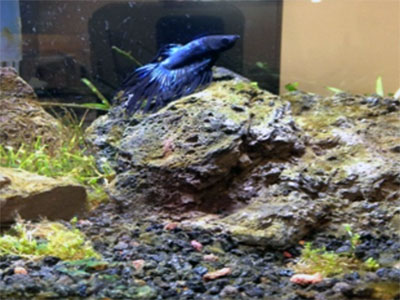 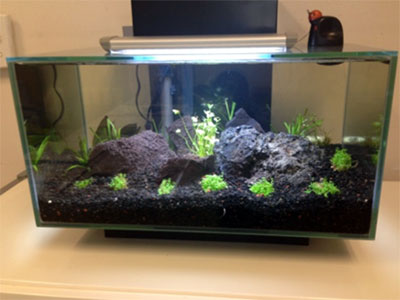 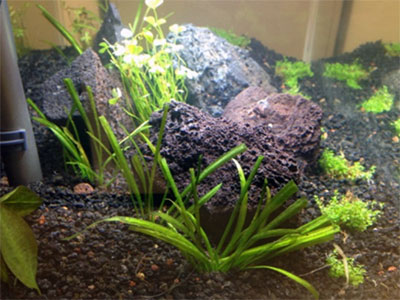 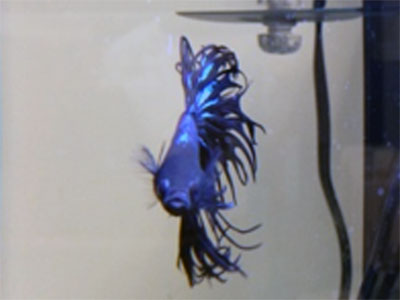 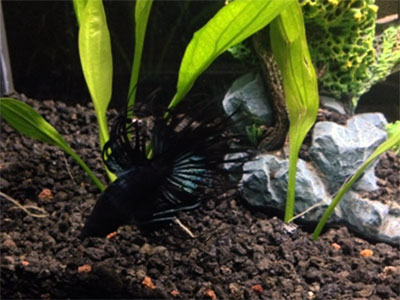 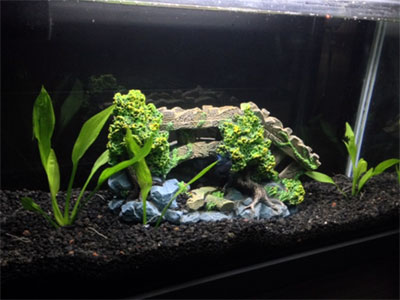 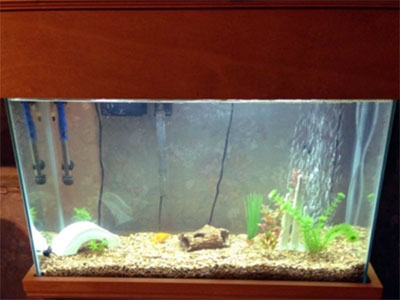 Acknowledgements:
I would like to thank my family for returning me to a hobby I forgot I enjoyed, if it wasn't for them, I would most likely not have returned to the hobby as soon as I did. Mike, I say this with sincere conviction, if it weren't for you, there would be no Fishlore, my hats off to you for providing such a great place for fish keepers to meet and talk about their passion for the hobby. The MOD team, thank you for being the gatekeepers and regulators of the forum, though I recently joined the MOD team and still have a lot to learn, your hard work before me truly offers a wonder experience for all members present and new, without you, Fishlore would be just "another forum." Lastly, I would like to thank all members of Fishlore, you make this forum a true family friendly and fun community. The erudition of knowledge and experience you all share and contribute enhances and makes Fishlore the best fish forum on the internet. Let's continue this trend, I know you will. Nos vemos!