The Congo tetra originates from the River Congo as well as Central African rivers. Congo Tetra are extremely beautiful African characins, growing slightly larger than most of its kind. They have slightly compressed and elongated bodies which have an iridescent coloration. 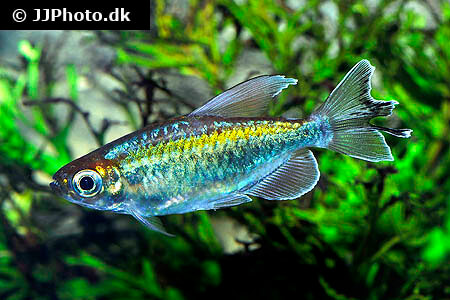 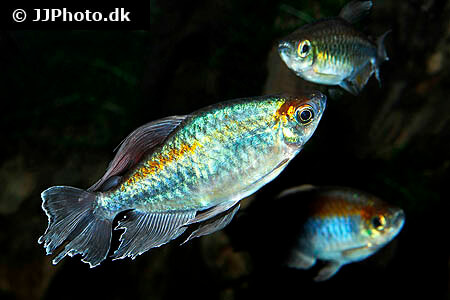 Generally, the mid body has a gold stripe while the flanks have a violet or turquoise color. The fins of well looked after and healthy fish are long and flowing and vary in color from grey to a lovely purple. 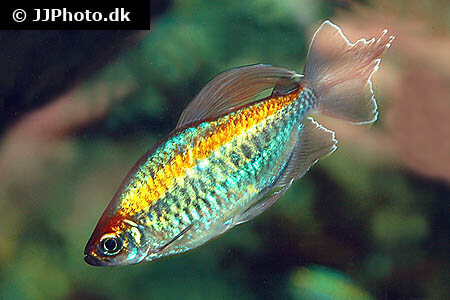 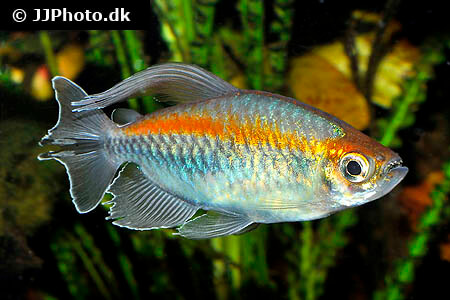 Congo tetra's require a tank of no less than 30 gallons because in keeping them it is advised to keep them in schools of six to eight. Keeping them in lesser numbers may result in them being very skittish and stressed as they don't feel protected enough. And it is because of this that most of the Congo tetra's seen today do not look anything like the beautiful fish it supposed to be. They need the space to be able to swim and develop their beautiful coloration. While they are able to tolerate other neutral pH levels, Congo tetras prefer softer water with a pH of 6.0 to 6.5. The temperature range these fish are happy with vary from 75 to 81°F (24 to 27°C).

Congo Tetras are fairly easy to care for if giving the necessary setup and needs. Nicely planted aquariums are especially good to have for these fish as it will supply cover for them to retire to if they are startled or afraid. Either plastic or live plants will be good enough, however it is good to keep in mind that live plants will help keep the nitrates low. Plenty of swimming place must be left for them as well, perhaps (depending on the type of tank) placing the plants at the back and sides would leave most of the front enough swimming space. Water quality is an important factor as they can be sensitive. Good filtration and circulation will help make a perfect environment. The adult size of the male Congo tetra reaches 3 inches with the females being slightly smaller.

As Congo tetras are timid by nature it is not advisable to keep them with much larger fish, very fast fish or fish that are aggressive toward them. They can also be frightened by loud noises. This might stress them, again another point in that they are not colorful anymore this time due to stress.

They will mostly occupy the middle and top waters of the tank. The best type of fish to be kept with them are other characins but this is not to say that other fish are not advisable, just be sure to keep fish that have more or less the same nature of the Congo tetra. It may not be a good idea to keep fish that are much smaller than them too, as they can nip at them. They also tend to nip at young plants.

Congo tetras are omnivores and will generally feed on flake, live and frozen foods easily. Give them a varied diet and feed live insect larvae and vegetables as an added diet to obtain the best of health.

The male is more brightly colored than the female and has a longer dorsal fin. Males are also bigger in body size compared to females. The females, being slightly smaller and duller compared to the male, generally has a swelled stomach when they are carrying eggs, this is with mature females. The tank intended to be used for breeding should have peat for substrate and soft acidic water. After courting the female can lay up to 300 eggs, scattered among the plants at the bottom. The newly hatched fry can be fed newly hatched brine shrimp and nauplii. 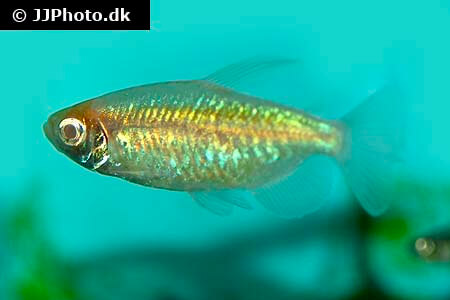 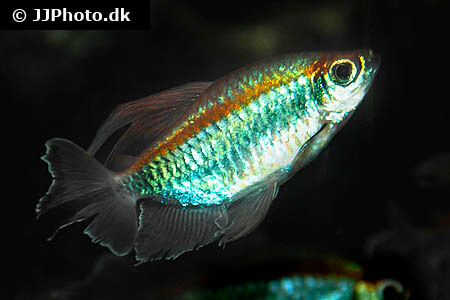 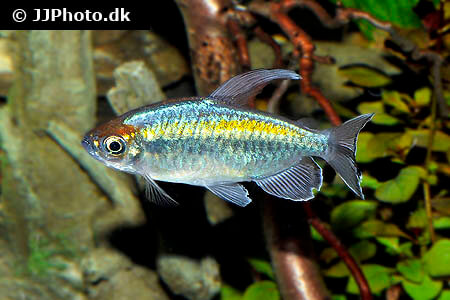 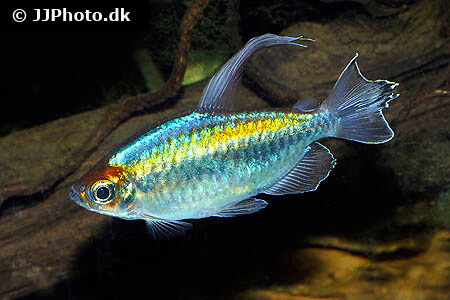 Size: Males get to 3", females are a little smaller

Temperament / Behavior: Peaceful and tolerant, may nip at delicate and succulent plants. Just don't keep with fish that are robust, hyperactive, and aggressive.

Breeding: Difficult in the home aquarium. The eggs hatch 6 days after being laid and fertilized.

Tank mates: Any other tetras, small fish that won't eat the Congo tetra, or fish that have the same needs as the Congo Tetra.

Fish Food: Omnivore, give live insect larvae, and vegetables as an added diet for best health.

Gender: The males have a long dorsal fin and are a little bigger then the females. The females get fuller in the middle when they are mature because they are holding eggs.

Tank Size: A minimum of 30 gallons since they like to school with at least 6-8.

Similar Species: Other tetras and Characins.