Introduction
Hello, my name is Alexis, but most of you on Fishlore know me as Lexi03. I am a 27 year old factory worker, wife and mother of 2 boys. I have a multitude of hobbies, but fish keeping and cooking are my two biggest passions. While I had some pet fish as a child, I wasn't involved much in their care. My love of this hobby began in November 2010, when my (then) 7 year old son received a 2 gallon tank for his birthday. Knowing nothing more than what the instructions that came with the tank, a week and 4 dead fish later, I found Fishlore.

After reading and researching as much as I could, I corrected my mistakes, and by Christmas we had gained 5 and 30 gallon tanks. Nearly 2 months later, and now up to 4 tanks, in January 2011, I decided to stop lurking and join the community here. My tanks and fish have brought me endless hours of entertainment and enjoyment since then. While there have been a few bumps in the road, such as the high levels of ammonia in my tap , or the bought of columnaris that nearly wiped out my 30 gallon last summer, I would not dream of parting with my tanks, which now total to 12 currently running and a few spares.

My Aquariums
The maintenance on my tanks includes a 25 to 50 percent weekly water change on each tank, with gravel vacs on the non heavily planted tanks. I use the API freshwater master test kit, and my dechorinator of choice is Seachem Prime. My adult fish are fed once every other day, with their staple diet mostly consisting of NLS foods.

My pride and joy at the moment is my 125 gallon tank. It is pretty heavily planted, with driftwood and terra cotta pots, and pea gravel substrate. I run 2- 36 inch duel T5HO fixtures on it and 2 -530 gph Sunsun canister filters. The inhabitants of this tank currently include a adult pair of angelfish (Castiel and Sam), 10 juiviline Philippine blue angelfish, 10 kerri tetras, 2 blue panaque plecos, 12 albino cories, 2 platies, and amano shrimp.

My next largest tank is a 90 gallon, this is one of two non planted tanks I have. It has quite a few fake plants though, and the fish colors seem to pop against the black background and substrate with the LED lighting. Stocked in this tank are 2 bloody parrots (Lily and Marshall), 2 Bolivian rams (Bobby and Dean), 8 giant danios, 2 platies, 6 yoyo loaches, and one very entertaining clown pleco (Fred). 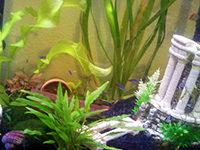 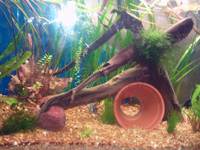 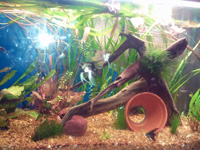 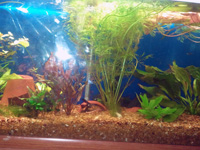 Future Plans
My future plans are to finish stocking my current tanks, and add a angelfish breeding tank and a small reef tank.

Acknowledgments
First I would like to thank Mike, the Mods and all the members that make Fishlore such a great site. A special thanks to Ken (Aquarist48), Dena (Catsma_97504), Jonathan (RogueAgent94), Jaysee and Akari_32, for the extra guidance, support and friendship. I also must thank my husband Chris (mtsguy21) who is my complete codependent and enabler in this hobby. And last to my two boys, Michael and Wyatt , who got me in this mess in the first place.