About Luna and Kappa

I go by the name Luna, not because I like the moon (I do), but because it's the name of a video game character I'm rather fond of. Just thought I'd clear that up. I'm 27, a 3-time cancer survivor (been in and out of the hospital for the past 4 years), and finally heading off to college this fall. Kappa is my little betta girl; her name means "water demon" in Japanese. It's fitting.

I'm actually fairly new to fish keeping; I started coming to FishLore in February. I've always been interested in animals (my most-watched network is Animal Planet), and my major is Captive Wildlife Care and Education. The reason I started was because we're allowed to have fish in our dorms, and I'm always happier with a critter around to watch and take care of. I'm happy to report that the 3 household cats have behaved better than expected... though I did have to explain to my boy that he wasn't allowed to try to pet his new little sister when I caught him pawing at her gently when he saw her moving in the tank her first week home.

I was smart/fortunate enough to come to *ahem* BETTA Lore for information before I started buying my equipment and setting up for a fish. The regulars on the forum were helpful in telling me what equipment is suggested (and why), as well as tips on feeding and tank maintenance. They were supportive and inquisitive while I chronicled my seemingly endless (anyone who's done it would agree it feels like forever) efforts to cycle my tank, and answered my every panicky little question. First time mommies are always a bit jumpy and paranoid, right?

I've had a few strange learning experiences, too... and may have the first documented case of a fish with a hairball. My first mishap was deciding to clean the excessive accumulated nasty gunk out of the marble substrate (and some of the substrate itself, I had too much of it in there) AFTER I'd spent 2 months cycling the tank. Mini-cycles are even more stressful than cycling the tank, especially when you might have been able to avoid them. I screamed and panicked and swore... a LOT.

The other significant incident is when she got constipated. No big surprise, especially with a piggie-fish betta, until I saw how it was coming out. I would see chains of waste hanging off of her bum, or stuck to a plant in the tank. I took a close look, and lo-and-behold, they were strings of HAIR. Everything in the house is covered in a layer of cat hair, but I'd been careful to try to keep it out of the tank. Not careful enough, apparently. When you combine a top-feeder fish with hairy water (hair floats), you get what I had...a fish that had to pass a hairball. I felt really bad about it, even more so because I thought it was so darned funny.

Now that I've had the chance to watch a fish close-up, I've noticed I get more enjoyment out of snorkeling and watching wild fish. I can see their behavior, recognize their anatomy (I know how to tell female fish from males, anyways), and just have more fun swimming with the fishies than I did before I had one at home.


I've only got one tank right now, mostly because I have no space for another and I don't think I could have or manage more than one in a dorm room. The tank is a 5 gallon Hex, which I discovered a little too late is inconvenient for tank maintenance, as it is taller than it is wide. It was set up in the last week of February. The Hex5 comes with an Eclipse BIO-wheel/filter box, and I also have a sponge filter - the Azoo Oxygen Plus 11. The light that came with it is a 10-watt compact fluorescent. I've got a Whisper 10-30 air pump to power my air stone and the sponge filter. The heater is the Visi-Therm Stealth 50W. I use - also at the suggestion of the forum - colored construction paper (currently purple) for a background. It's a cheap and easy way to change the look of the tank. 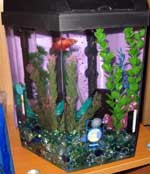 
The only fish I have right now is Kappa. I got her a week after I set up the Hex5, though I saw her before I set it up. I'd gone into a local pet store, and saw her in one of those awful Cups of Death. She was so cute, staring at me with her lipsticky pout. I didn't want to leave her there, but I fully intended to cycle my tank before I brought a fish home. A week later, I was in the same store, and she was still there. I couldn't just leave her there, so she came home (her bag tucked into my shirt for warmth - Maine winters are cold!) and was a trooper through her 2 months of tank cycling and daily Water changes.

She's an odd little piggie-fish, too. I'd seen on the forum that bettas can be picky eaters, but I'd never encountered that problem. She chomps down her Betta PRO pellets with greedy glee (3 per meal), she loves hunting for her daphnia, and she even loves her pea treats. Recently, she had her first bloodworms - also a hit. The ONE thing she didn't like is something that's widely reported as being healthy and an appetite stimulant - garlic. Go figure. I blame the red fins - all red-finned bettas are naughty little stinkers... loveable little stinkers, though.

I've got a few aquatic plant bulbs, and I'm trying to get one to sprout at the moment... no luck so far, though. I'd love to have something real in the tank, as enrichment for Kappa, and to eat some of the nitrates.


I would love to have more tanks, or a bigger tank with room for plenty of live plants that I could divide (to add another betta, of course). I may have to wait until I get out of school, though...unless my family gets a bigger house with floors strong enough to support tanks full of water before then. Here's to hoping!


Kappa - Thank you for being your gluttonous self.
Chickadee (Rose) - Thanks for being the patron saint of betta-mommies... and having the patience of one!
The Betta Forum regulars - Thanks for being helpful, picture-obsessed ichthaholics.
FishLore and Community - Thanks for having an informative site where people can go to learn (and help others) to care for their fishie friends. There isn't enough good information out there (and a lot of intentional misinformation being provided to trusting consumers), but you all help spread facts about the kind of care fish need and deserve.

...and a thank you to whomever nominated me for a member spotlight.