The Figure Eight Puffer is an entertaining fish that's full of personality. The Figure 8 Puffer looks like young Green Spotted Puffers with unusual patterns, but they are truly very different fish with very different requirements. Figure 8's are a better choice for most aquarists than the GSP because their requirements are easier to meet.

These puffers will only grow to about half the size of a GSP, thus they need only half the space. 15 gallons is sufficient for one puffer, with 10 gallons more for each additional puffer. Also, they are easier to keep because unlike the GSPs who need high brackish to marine as adults, the Figure 8's only need a low brackish of 1.005-1.008 throughout their lives.

They also are a bit less aggressive than the GSP, so it's easier to keep them living in harmony, especially if they are all raised together from a young age. But don't be fooled, they can still get quite nasty at times.

The question of tank mates for the Figure 8 Puffer is open to debate. Some have reported at least short-term success with mollies, bumblebee gobies, and others. But really most fish will be pestered and nipped often. Also, an adult sailfin molly gets very large and will usually end up bullying the puffer instead of the other way around. Really the best thing to do is to keep a singleton, but groups of them can usually work if enough space and hiding places are provided.

Also, some people say that F8's and GSP's can be kept together, but this is not a good idea. Not only do they have very different salinity requirements, but when the GSP gets larger and much more aggressive the Figure Eight will likely be bullied and picked on constantly.

A healthy diet is a crucial part of keeping any puffer. Most important is foods that will grind down their ever-growing teeth. Snails are excellent for this, as well as clams and other hard crustaceans still in their shells. Other good foods for them are things such as bloodworms, blackworms, brine shrimp, mysis shrimp, etc.

Puffers appreciate a complex layout of decor to explore, as well as ample swimming room. If your puffer is just pacing the glass, it's probably bored!

They are very personable creatures, and will come to recognize their owner and also the food container. They make great pets and will give you years of enjoyment. 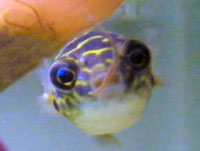 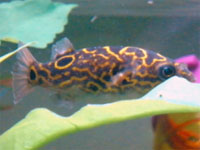 Origin / Habitat : Asia and India in brackish streams and estuaries.

Puffer Tank Mates : Best kept alone, can often be kept with other figure eights. Other possible tank mates include brackish gobies such as the bumblebee or mollies, but success is not very likely.

Fish Disease : Freshwater Fish Disease - Diagnose, Symptoms and Treatment - Be sure to quarantine, as they are wild caught and often come in with parasites.

Gender : Even for experts, it is nearly impossible to sex them. Usually the only way is by dissection, or if they happen to lay eggs (an unlikely occurrence).

References :
Aqualog: The Puffers of Fresh and Brackish Waters by Klaus Ebert