Hello fellow fish fanatics! My name is Val and I live in North West Ontario, Canada. My foray into fish keeping started early 2007 when I announced to my husband that I wanted a betta fish. He said there was no way I was having a fish that lived in a small bowl, because it was cruel. I argued with him that bettas preferred to live this way, and the argument ended by me turning to Google for research. Within minutes, I had learned that he was right and I was wrong - oh man, to have to admit that. So I swallowed my pride, admitted I was wrong, and that I was now going to buy a betta and an aquarium!

I made the trip to Walmart, and was astonished at how the bettas were kept, in such tiny cups. I found the boy I wanted, a beautiful blue veil tail, and asked if I could mark it "sold" with a sticky note (which I had prepared and was in my purse) since they were under quarantine until the next morning. The gal looked at me like I was from Mars; however, I did just that, and anxiously waited until morning so I could retrieve my first fish. I awakened the next morning to find that my husband had gone and retrieved "Neptune" at 7 am and brought him home. I am sure if he knew the course my new found hobby would take, he would have thought twice before doing that.

Having never had fish, everything seemed weird and new to me. I just had no idea of what was involved. Back to Google, and that is how I found Fishlore, and my education began. Being of the certain age that thought the web held untold dangers, I was hesitant to sign on as a member. However, I did, and a whole new world opened up to me.


Neptune is in his original 6 Gallon Eclipse Aquarium, with some Java moss, a neat cave that he sleeps in, Visitherm Stealth Heater and silk plants. He is a mellow and personable boy who holds the top position in the heirarchy of my fish. 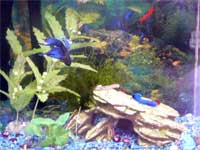 Tiny King is a Double Crown Tail male Betta, fuschia and lavender, also in a 6 gallon Eclipse with a VisiTherm Stealth heater, and has 2 corydoras for roommates. TK shows no aggression towards the cories, but always has to sit in their food bowl at feeding time, and follow them around if there is a spirulina pellet or algae flake to be had. He steals food constantly, but seems to be bent on the game, rather than actually eating the food. The cats love this tank, and we all have endless hours observing TK's antics. The tank has Java Fern and silk plants, with various hideouts - that were meant to give the cories a place to hide, but have turned into a place for TK to hide the Cory food. He is a character! 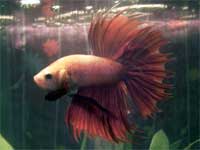 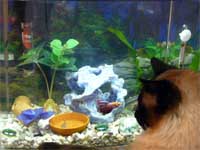 Wink Jack Sparrow is a wonderful white and blue double veil tail male betta, who was just a tiny mite when I rescued him from Walmart on the day he arrived. Since then, his colour has changed considerably, and his attitude is just beyond recognition. He is in a 10 gallon tank, with an AquaClear HOB Filter, VisiTherm Stealth heater, various hideouts provided for his roommates that were sold as otos but turned out to be Chinese Algae Eaters. They were removed, and two small otos took their place. Wink stalked them continuously, and before long, had pecked out the eyes of one little oto. All roommates were removed, and Wink now has the 10 gallon to himself. Schemer! 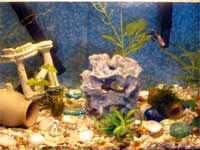 All substrate in betta tanks is smooth river rock .

Guppy Grow Out Tank - Thor Hydor heater, Aqua Tech filter, bubble wand with Whisper Air Pump, various decs, silk plants, guppy grass and java moss. What started out as an experiment with hard well water with a pregnant fancy guppy, ended up as a grow out tank for 25 fry, now almost 2 months old, housed with Wink's blind oto, and 2 others. I have not come to terms with getting rid of these amazing little mites - however, will most likely be doing that in the beginning of the new year. Substrate is black smooth river rock. 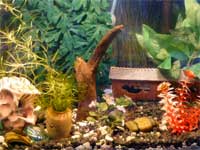 55 Gallon Community Tank: This is the tank I won. We bought a beautiful canopied Sedona wood stand from Dr. Fosters & Smith (to cat-proof it) filled it with fish and it is an amazing miracle of nature in my mind. Remember, I hadn't even thought of fish several months before winning this. Prior to selecting fish, I Goggled constantly and called upon the expertise of Fishlore members and read books before finally settling on the species I wanted. This tank has a 200 watt Aqua Clear heater, Whisper HOB filters, a limewood bubble air stone as well as a Rena Micro Bubbler, 3 pieces of white quartz rock from Rainy Lake and various silk and live plants (anubias, Java fern and moss, water sprite and red root floater - some of which have proved too inviting for my Blue Neon Gouramis - even though they get their greens every day). 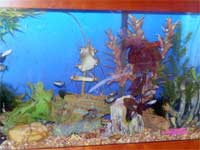 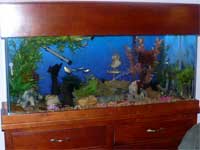 The community includes: 1 male Kribensis, 2 male Neon Blue Dwarf Gouramis, 2 Orange Dwarf Gouramis, 6 Red eye Tetras, 1 pearl molly (aka fish from hell), 4 Sailfin Mollies, 5 otos, 2 Butterfly/Hillstream Loaches and 2 Fancy Guppy girls. Substrate is smooth river rock. I believe the success of this tank is directly related to the fact that all fish have similar requirements regarding temperatures, food, space and water requirements. The tank is healthy and active at all levels.

I purposefully chose beginner level fish and equipment so as not to complicate anything, and as I progress in the hobby, will trade up for more advanced equipment, filters in particular. I have had amazing luck with my choice of fish, losing only 3 fish since the community tank has been set up.

What I Have Learned:


I learned very quickly that I love this hobby. It is addicting, and I would love to have more tanks. However, I am using well water, which is basically "liquid rock" that I filter prior to filling the tanks. It is a lot of work.

The more research I do, the more fish I find that intrigue me. The Fishlore community is a wonderful resource, full of people who have like interests and are always willing to help and advise. I live in a small community, on the Minnesota-Ontario border, with only Walmart as a fish source. Just over the border, and several hundred miles further south in Minnesota, I have found two small local fish stores, and I prefer dealing with them rather than the huge chains such as Petsmart (which I have to travel to anyway.)

I order most of my supplies, medications, food and decor online at Fosters & Smith, Big Al's or That Fish Place. So although it may be inconvenient, I have access to everything that those of you living in the city have. (Not shipped to Canada, but to Minnesota.) For those who are interested, Big Al's does have a Canadian resource.

It took me a while to learn that basic clean water with frequent changes and not overfeeding will result in healthier fish. While I think I have one of every medication made in my supply, (the rookie mistake - and a costly one) I use Maracyn Plus almost exclusively if I need to medicate. Otherwise, following advice from CWC; Dino and Rose, I use no chemicals preparations at all in any of my tanks and I have had no further instances of fin rot or other diseases for a very long time. I am positive there is a direct correlation. I do use Vita-Chem at every water change.

I learned to "trust my gut" - if it feels like something isn't right with water or fish but you can't pinpoint it, watch them carefully, because you probably are right!

I feed all of my fish a varied diet. I change up the food in the community tanks, using fresh zuchinni, seaweed salads, spirulina, tropical flakes and granules, shrimp pellets, blood worms and algae discs. Feeding time is especially amazing to me. I hand feed the betas (blood worms, Atison's Betta Food which are very tiny, daphnia and occasionally bits of tubifex worms and various greens) which gives me some one on one time that we all enjoy. I can't not sit and watch feeding time for the guppy fry and in the community tank. It truly is a wonder that I believe every fish keeper should take time to enjoy.

I subscribed to Aquarium Fish International magazine which is always full of great photos and relevant information for fish keepers of all ages.

I swear by the product BIO-Spira. I finally found it in a Minnesota LFS just as I was about to order it online. I had a tank that would not cycle after months and months and I was so frustrated, so broke the tank down and started over with Bio Spira and I was totally cycled in days. I have never been without it in my fridge since that time, have cycled my guppy grow out, 55 gallon community and betta tanks with it, with overwhelming success. I have not lost a fish - and add all fish at start up. This product also has excellent techs to help with any questions. If you can find it, I truly believe it is worth every cent.

Each tank has separate siphons, nets and algae brushes with names written on them to ensure no cross contamination, as well as backup heaters, thermometers, decorations and filters and filter media. This may be overkill, but having them on hand I feel prepared to deal with almost any catastrophe. This gives me peace of mind and I try not to think of the expense each time I open the "fish cupboard". Again, my hubby just rolls his eyes.


While I have met so many wonderful people on Fishlore, I would like to publicly acknowledge:

"LZFLOYD" (Mike) - who patiently walked me through how to medicate and was a constant support when I had to deal with my first crisis . Soon after this, I started to make my own decisions, a very important crossroads. "

"CHICKADEE" (Rose) - For early guidance, introducing me to Bio Spira and whose experience and friendship has brightened my life and made for happy, healthy fish.

"CAPEKATE" (Kate) - the friend you know you are meant to have in your life, to share fish talk, girl talk, heartaches and laughs.

"TAZMICHE" (Michelle and Jacqui) - friends from across the pond, for advice, laughter and sharing of like interests

"CHIEF WATER CHANGER" (Ross) and "DINO" (aka Dino) whose advice and assistance has helped open a new world to me, and whose friendships have touched my heart. We are worlds apart, but brought together by this forum. Thanks for keeping it real.

Thank you Mike - (so elusive) for making this forum available to fish-a-holics young and not so young - you have done a wonderful service! My hubby is convinced I am somewhat eccentric, and it is great to know I am not the only one!