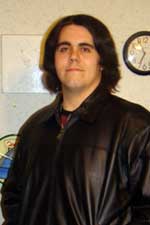 I started keeping fish in June of 2006. I moved to the eastern end of Tennessee in early 2006 and was immediately mesmerized with the scenery. The beautiful Appalachian Mountain range is just a couple of miles away from my home and provides a great view as I drive to and from work. I am currently studying to get an affiliate broker's real-estate license while I work full time. I am a very lucky person in that I started keeping fish when I took on the task of helping my best friend with his fish. That task has turned into a co-ownership of 110 fish tanks and a 1000 square foot fish house. Dino, one of my fellow Fishlore moderators as well as the fish house co-owner, is my best friend, fish keeping mentor, and will one day be my business partner.

I've been on Fishlore.com for the better part of a year and have worked as a moderator on the site for several months. Fishlore has given me several new friendships as well as strengthening previously existing ones. I was asked to join Fishlore by two of the most knowledgeable women on the site. Those women also happen to be my good friends, Carol and Kimberly (Butterfly and Gunnie). There are a few new friendships that shall remain nameless, for the issue of fairness to those who wouldn't have been listed.

My parents enjoy helping out in the fish house by doing our weekly scheduled water changes as well as being caretakers anytime Dino and I are not home. They're being drawn into the world of MTS (multiple tank syndrome.) We've set them up a small, 3 gallon betta tank in the house. They've quickly become enthralled with the betta, homer, as my dad calls him, and have grown to want a 55 gallon tank when they are able to afford it.

In the year and a half I've been working with freshwater tropical fish I've learned a lot of info about fish, equipment, tanks, medications, chemicals, etc. I've grown to have the same frustrations as any other truly knowledgeable fish keeper. Those frustrations of course are mainly based on people that spread false information and claim to know everything there is to know about any type of fish.

I got my start in freshwater fish keeping with a variety of neolamprologus, but quickly grew to specialize in the keeping of fancy guppies (poecilia reticulata.) We currently have somewhere around 20 guppy strains in the fish house and each one has something unique in its behavior that astounds us on a daily basis. I am floored when people toss a bunch of strains in with each other either for housing or for selling; that ruins each strain. I eventually want to setup a half dozen or more 40 gallon long tanks to develop a strain of guppy that is rare in the hobby. I believe taking on a project of that magnitude would be the ultimate test to my guppy keeping skills, and a statement to just how much I enjoy guppies.

When Dino and I eventually have our retail store we're almost guaranteed to be successful. We've already discussed several aspects of the business and have a whole panel of friends to help with brainstorming for such an endeavor. We have friends that range from kids that know what they do and do not enjoy about their local fish stores all the way up to lawyers that can advise us on the legal steps we should and should not take to keep ourselves in good standing. Our store will be freshwater fish only, but we will sell equipment and dry goods for saltwater keepers, just not the livestock. There are so many freshwater fishes that are underappreciated for their beauty that need to be shown for their true glory. All the stores around us (none closer than 50 miles away) are going more and more to only keeping saltwater livestock, so we will be the only freshwater only store in our area and definitely have more freshwater livestock than any other store.

I would like to thank several people again for their roles in getting me to where I am with fish keeping as of today. Those people would include, but are not limited to:

Butterfly "Carol"- Moderator, mother-figure, good friend, and mentor. No one has a bad word to say about that lady, and if they do they know better than to say it. (Mr. Butterfly gets a thanks to!)

Kimberly "Gunnie"- Moderator, sister-figure, good friend, jokester-extraordinaire. She's the sister I never had, and a friend I'm blessed to have. (Mr. Gunnie gets a thanks to!)

Dino "Dino", "Dino Claus", "The original Fish Alien" - Moderator, best friend, mentor. Without him I would've never met anyone else mentioned here, and would've never started keeping fish in the first place. I owe him so much. J

Mike "Mike" - Administrator. Thanks for allowing me to assist in the moderating of one of the best fish keeping websites on the web. It's definitely my pleasure to be a part of the family called Fishlore.