They are considered a sub-tropical fish since they come from cooler waters where the temperatures range from the mid 60's F to 71 F. Keeping them in warmer temps, such as a reef tank where the temps can be in the low to mid 80's F can really shorten their lives. Ideally the Catalina Goby should be kept in a cooler water set up with similar sub-tropical species. They are often found near zebra gobies (Lythrypnus zebra).

An interesting thing to note about this goby is that they can change sex. Males will lure the females into a cave where she will place the eggs on the wall for fertilization and then the males will guard them until they hatch. Males can become quite territorial with other Catalinas, especially during this time period.

Feeding them should not be an issue. Frozen mysis shrimp and brine shrimp can be used to entice them to eat and you can even get them eating flake foods in time. 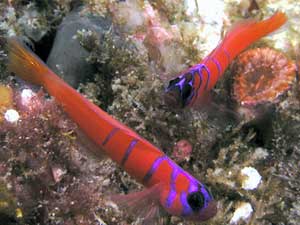 Temperature : 64°F - 71°F (18°C - 22°C) - temps that are too warm will drastically shorten the lifespan of this fish. You will most likely need an aquarium chiller to keep your tank in the proper temperature range for this species. For smaller tanks we've reviewed the JBJ Mini Arctica Chiller.

Temperament / Behavior : Can be quite territorial with other catalina gobies, but peaceful with other species but use caution if housing with other gobies.

Breeding : The Catalina Goby can change sex, with females preferring larger males. Males will guard the eggs until hatched.

Aquarium Size : 55 gallon (208 liters) minimum, with a live sand bed. They build burrows usually near the live rock in the sand bed.

Reef Tank Compatible? : Most "reef" tanks are too warm for this species.

Fish Disease : Saltwater Fish Disease - Diagnose, Symptoms and Treatment - usually considered somewhat hardy when kept in the proper temperature range. Temps that are too warm could lead to stress which could lead to disease and shortened lifespan.

Tank Region : Usually claims a spot in the tank as it's territory where it will stick close to for the most part.

Cryptocentrus cinctus
Yellow Watchman Goby
This goby forms a symbiotic relationship with the pistol shrimp. They may scrap with other goby species, so use caution when stocking.

Nemateleotris decora
Purple Firefish
In our opinion one of the most beautiful fish species available. They are rather hardy and great jumpers. A good fitting hood with no holes for escape is needed.