The Archerfish is famed for its amazing ability to shoot down resting insects above the water surface. However jumping out of the water to catch its prey is much more preferred than 'shooting', as the one that caught the insect doesn't always get to it first. When the insect is near in enough, the archerfish will leap out of the water to catch it in its mouth. If this fails, then it will resort to shooting. Generally the fish swim in 'shooting parties'. When prey is sighted they will shoot relentlessly. Each fish will shoot at the same insect, when it falls the entire 'party' rushes towards it, wanting to be the first to grab it.

Archerfish are able to shoot by putting their tongue against the roof of the mouth, forming a tube. By suddenly shutting their gills, water is then powerfully forced along the tube and out. The tip of the tongue directs the aim. Their large eyes are located near the mouth giving off a binocular vision thus assisting their aim to accuracy. To get a good jet of water, the snout is pointed out of the water with the rest of the body remaining under. Their eyes, however, do not automatically correct for refraction, and they have to learn how to do this. The position of least distortion is directly below the prey, and the fish soon learn that this is the best shooting spot. They can shoot up to 7 times in succession, 2 - 3 meters being the longest range. However they are accurate only around 1 - 1.5 meters. Sometimes the blast of water may not bring the insect down but the weight of the water on its wings brings it down. Young fish start learning to shoot when they are about 1 inch long, their jets reaching 10 - 20 cm.

There are several different species of Toxotes: 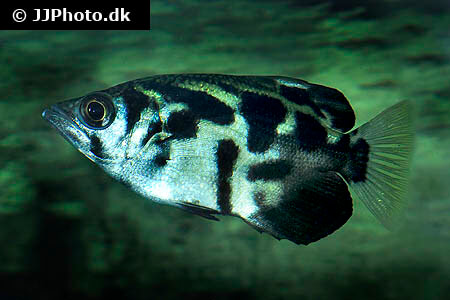 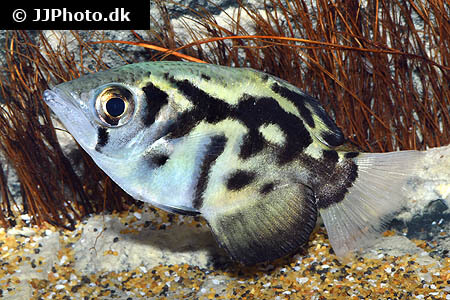 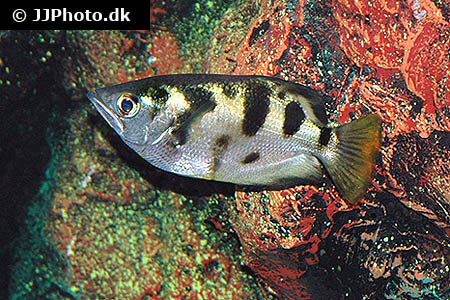 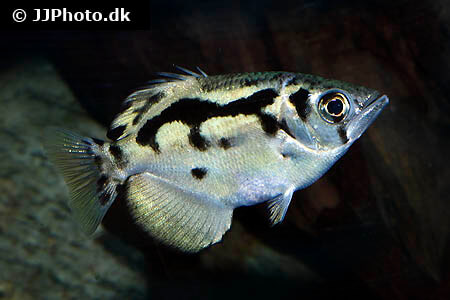 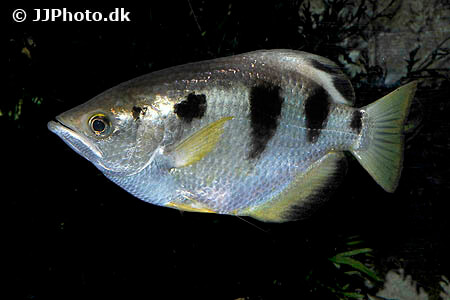 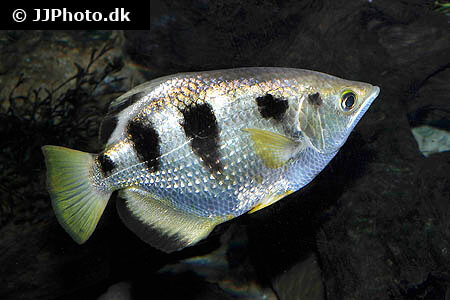 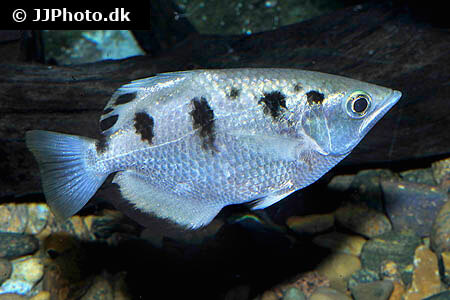 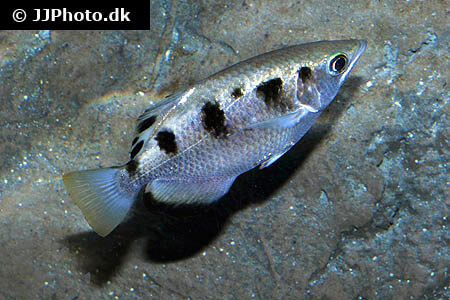 Their original habitat includes, Southeast Asia, northeastern Australia and the Gulf of Aden, mainly the brackish waters. A pH of 7.0 to 8.0, medium hard water and a temperature of 68 - 82 %F (20 - 28 %C) is the best conditions for them to be kept in. When they reach 4 to 5 inches in size 1 teaspoon of aquarium salt per 1 gallon of water should be added to the aquarium water. Growing between 10 and 12 inches in size, these fish require a tank size of a 100 gallons, minimum. Providing aquarium plants that grow above the water surface is advisable but be sure not to crowd the surface area as they need space to practice their shooting. Rocks too can be added. Keeping the water level a few inches below the top is also advised, so that they have room to practice. The tank lid must be secure as they jump.

Being omnivores, they can be fed live insects, meal worms, and freeze dried plankton. These can be fed with dry seaweed. Smaller fish can be given to them too as they grow, as they hunt other aquatic creatures too in their natural habitat. Most insects are eaten with relish, for example, spiders, crickets, mosquitoes, grasshoppers and earthworms.

It is preferable that they are kept in groups, however, being alone can be fine too. They are generally peaceful fish but smaller fish should not be kept as tank mates as they will most probably get eaten as the archerfish grows.

There is no way known of sexing them. Reports of them breeding in captivity are rare. If it is your wish to breed them you should get a group of them together in an aquarium. The adult pair spawns at the surface, laying up to 3000 eggs. These eggs float on the water surface. To ensure the survival of the fry, the eggs should be transferred to another tank. They will hatch in around 12 hours.

Origin / Habitat: Asia, Oceania, India and eastward to Phillipines - found in brackish water conditions in estuaries and but also travels into rivers. Situates near overhanging vegetation for food sources.

Lifespan: Possibly longer lived in aquariums - 5 to 10 years or longer

Temperament / Behavior: Can become territorial with their own species, but are usually peaceful with most other tank mates.

Tank Mates: Other brackish fish species such as Monos, Scats, some Gobies, etc.

Diet: Omnivorous, will accept a wide range of foods, but frozen/live are foods preferred. Crickets and worms are good treats too.

On the Web
- Wikipedia
- Fishbase