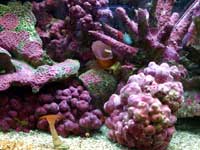 Ever since I can remember, I have always been fascinated with fish. I most remember going over my grandparents house and watching my grandpa's fish. My parents never gave me any fish of my own since I was not old enough to take care of them. For several years my grandpa fought cancer, at one time it disappeared but then it came back and finally took him away in the summer of 2005. Before he passed away there were several months in which he was not well enough to clean his tanks, surprisingly none of his fish passed away.

After he passed away my parents allowed me to inherit one of his 29 gallon tanks (110 liters) and my aunt inherited his other two. Before I transported his tank to my house I bought a half gallon tank and a betta also. A few days after I bought a betta, I went over to my grandparents house and brought the fish home along with the tank. Long story short, I went through several beginner errors such as having the tank overstocked with my grandpa's fish. I quickly fixed that along with getting a more powerful filter. I did not lose many fish, though for some reason I seemed to have a knack to keep them alive. I started reading fish books and looking at fish profiles online and purchased fish actually pretty wisely. After getting the tank in the beginning of June by September I pretty much had a stable tank that was not overstocked.

For several months I more or less just read more about fish, finally over winter break in December I thought to look up fish forums online. I came across quite a lot but liked Fishlore the best with some very nice people here. I soon learned more about the nitrogen cycle and many other things and have gradually come to where I am now.


This was my first real tank ever. I'm still not completely satisfied with it two and a half years later but I'm getting close. Just goes to show how long a tank may take to be really happy with it. The tank is towards the overstocked side but I do test my water parameters and keep good water levels with 15 percent weekly water changes. I have only encountered one case of ich over a year ago along with a case of bloat a year and a half ago. Besides that I have experienced few deaths aside from old age. My grandpa's angels just recently passed away after about 10-11 years, two being with me. I feed veggie flakes every other day with tropical flakes on the other days. I feed a little less than one teaspoon every day along with frozen brine shrimp and bloodworms mixed in as treats about once a week. 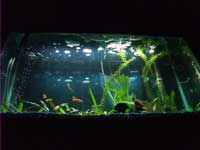 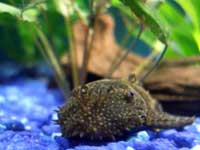 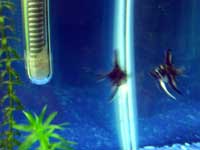 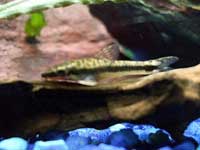 
I had bought a 2.5 gallon tank for my betta two years ago but sold the tank about 8 months ago. Later I bought a 5.5 gallon tank for him instead and started a planted tank. I started to research saltwater more and more and finally decided I could convert the 5.5 to a saltwater tank. In early April of 2007 I bought my equipment and started my tank. It is now as it is below though I now have a calcium and alkalinity test kits but have not used them yet. I am currently still researching and finding corals available near me that also would suit my tank along with saving up for them. I feed my goby a pinch of veggie flakes every other day with frozen blood worms mixed in on the days I don't feed flakes along with one fast day. 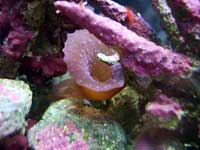 
My future plans for my 29 gallon tank is to increase the lighting to 40w, add DIY co2 again and make it a heavily planted tank. I also would like to replace my current heater with two 75w heaters. I am happy with my stock now finally. For my 5.5 gallon tank I would like to make it a full reef with various corals along with locating a few more snails. Over the course of the next months I hope to gradually fund my plants.


I am thankful to fishlore provided by Mike, along with other members that helped me get off to a good start Butterfly, Gunnie, Dino, and Chickadee in particular when I first came here. I also am thankful for my Parents letting me indulge myself in this wonderful hobby and my Grandpa who started it all. I have learned a large amount since I joined Fishlore and learned of new books and online sources to read along with the Fishlore members that keep joining. I still have much more to learn.