Introduction
Wow, I'm very surprised I made the member spotlight, and I'm truly honored. Here's a little about me: my name is Shelby (nippybetta). I'm 14 years old, and I must be the only teenager in Western Washington who is fish-crazy (actually, that's a lie: I've met two others, but they weren't as crazy as me).

I live with my parents and 8 year old brother on what could be considered a farm. We have 10 acres. My dad owns a terrestrial plant nursery (too bad) and my mom, a preschool. We have a black lab named Mondo, and I love him, but he might love me more. He was bred to be a hunting lab, and so he really likes chasing birds, and especially rabbits, because they can't fly away.

I've switched schools a few times. In 5th grade I left my old school to go to a gifted program, and then left that again, because I had been learning more before. Three months into 8th grade, I left my middle school and started taking the transit bus to a better one, half an hour away. I really enjoyed the track season because I got to see friends from my old school, and I love hurdles. I think it would be really fun to do hurdles in the dark someday (and here you'll think "oh, just like most teens, wanting to take risks").

My fishkeeping history
I can vaguely remember having 2 guppies in a small tank as a little kid. One evening my mom performed a large water change and I found them on the floor in the morning. When I was 8 I had a betta, and kept him in what could only have been a liter of water, with water changes averaging every 3 weeks. I had 3 bettas in that tank (all at different times), and they all lived about a year.

When I got really interested in fish last summer, I did a ton of research, and was torn between guppies and glofish. I ended up with a 10 gallon tank with 4 guppies in it. Of course, I'd heard of the nitrogen cycle, but didn't understand it, and I thought it was unimportant. My fish had ich in a matter of days, and only 1 lived until it was cycled. Then, of course, I had to get another male and female guppy, 3 platies, and a dwarf gourami. I was considering a neon tetra school too, because the tank looked empty.

Next I picked up a 29 gallon tank off craigslist for 60 bucks. I set it up, seeded it with my filter media, and moved my 6 fish into it, while I waited for it to get settled. There were guppy fry in the 10 gallon tank. I moved 5 cherry barbs out of my brother's 10 liter tank into it, and a bunch of my larger guppy fry. I picked up an angelfish, 2 male rams, and my first 2 plants after it had been set up for a month. I had some difficulty with the angelfish at first, who got what seems to have been velvet and fin rot, but after a quick spell in my 10 gallon tank he recovered.

On the new year I got 3 more angelfish and 2 more plants. Within days I was losing fish. First to go was my bigger ram, who had been bullied by the small one, but was finally starting to get bolder. I lost one of the newer angelfish, who had appeared to be pairing up with my marble female. My fantastic guppy male died, along with 2 of my platies. When I finally discovered it had columnaris, I was horrified, and I really discovered the meaning of the phrase "ignorance is bliss". I cried a great deal that first day of enlightenment. After a whole lot of work, and spending most of my cash on antibiotics, I got rid of the columnaris.

At the end of March I got my 3rd and most recent tank. It's 75 gallons and I adore it. At the present I consider it lightly stocked, and I'm not intending on getting any more fish in the near future. I will probably add a few more angelfish, which I'm presently raising, but I really don't want to push my bioload, or get aggression problems.

My Tanks
Right now I'm raising about 50 angelfish fry in my 10 gallon tank. They hatched on July 8th, and have been stuffing themselves with napuli ever since. They're already very dark, like their parents.

In my 29 gallon tank I have a platy with some sort of genetic disorder; her belly is at least as big as the rest of her, and she isn't pregnant. There is an inch long BN pleco, who can almost keep up with the algae in that tank. I still have the 5 cherry barbs that were once in a 10 liter tank. Five of my male guppies who haven't yet developed the tails I want and aren't allowed to see the girls yet are constantly bickering in there. This tank also houses my angelfish pair- a black marble female and a black male. They've laid eggs 5 times now, and eaten them every time except for when I took the eggs away to hatch them on my own. I adore the male angel; he had columnaris and I kept waking up in the morning and looking in the tank and hoping I wouldn't see his body. I'll be very sad when he dies. This tank has many more plants than it did originally, although they are not doing so well as I would have hoped.

My 75 gallon tank houses my 6 large female guppies, and 1 very fancy male. I have 4 rams, and I'm hoping to get at least 1 pair out of that bunch. There are also 4 angels, all different sizes, that I took a liking to at the pet store(s). I have 1 BN pleco in this tank, and he seems very busy, but I guess I have the wrong kinds of algae available for him. A school of 6 ottos wriggle around, and especially like hanging out next to my filters outflow. There are 5 bronze cory cats, which particularly like my water wisteria and clay pot. 6 golden neon tetras (yes, golden) with bright blue eyes hang out near the driftwood, and look very appealing in front of it. I was fortunate enough to drop my Petco when they had them, and I really enjoy watching them. 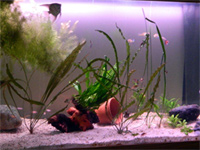 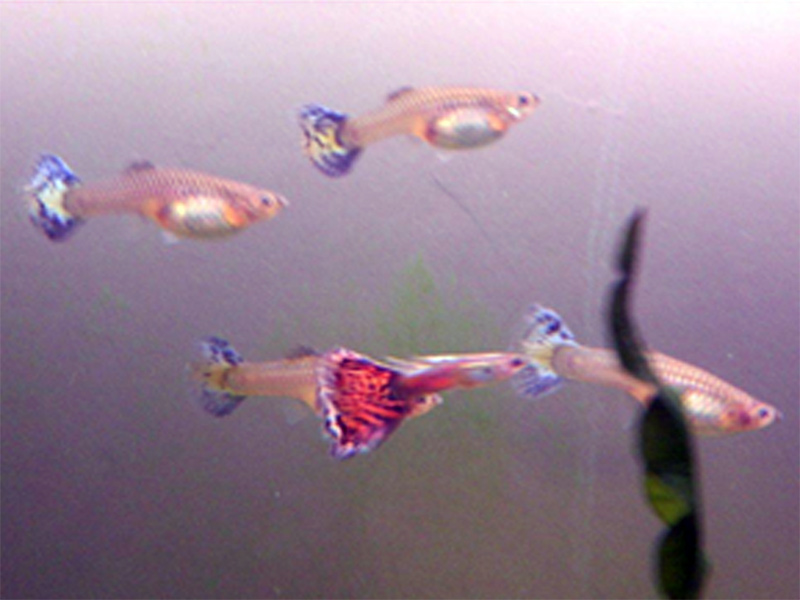 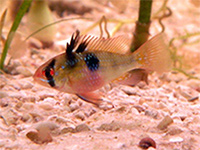 Advice
- Learn about the nitrogen cycle
- Perform frequent water changes
- Research fish thoroughly before you buy them; don't try to stuff an oscar in a 10 gallon tank, or put 2 bettas in the same bowl. - Don't be afraid to ask questions, even if they seem stupid to you
- Don't give up! When I was new to fish keeping it was very stressful and difficult, but since then it has proved very rewarding.

On Fishlore, I'd like to give special thanks to Dena (Catsma) for putting up with my endless questions and helping me save my black angel from columnaris, and then raise my angel fry. I would also like to thank the rest of the mods for making fishlore a safe, helpful site, and always trying to share their knowledge with the rest of us.