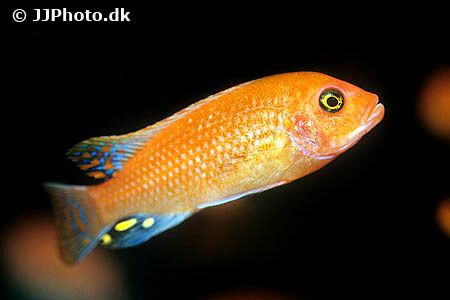 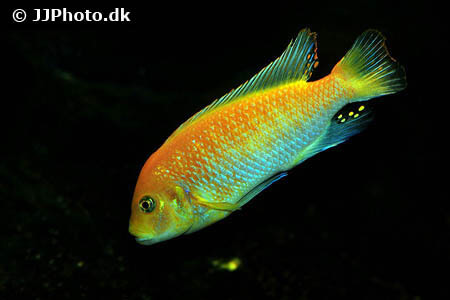 The minimum tank size recommended for the Zebra Cichlid is 50 gallons (180 liters). They require quite hard water with a pH of 8.0 - 9.0 and will do good with a temperature between 72 - 82°F (22-28°C) The zebra cichlids adult size is 6 inches (15 cm) and they normally live for about 5 - 10 years in captivity. A few hardy plants should take their nibbling although more often they will either uproot or destroy most plants. It's worth a try though, as some people have managed to keep plants. Using rocks is a good way of decorating the tank. Be sure to create plenty of caves for those seeking safety from other aggressive tank mates. Another thing to keep in mind is they are diggers and are always piling up substrate/sand.

They are relatively easy to care for, feeding mainly on herbivorous diets although they are omnivores. Dried foods, plant matter, frozen foods and every so often meaty foods and live foods such as earth worms are good to feed. They are also algae grazers. 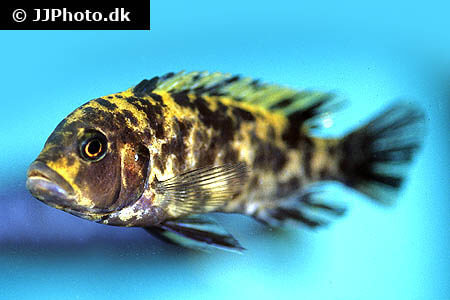 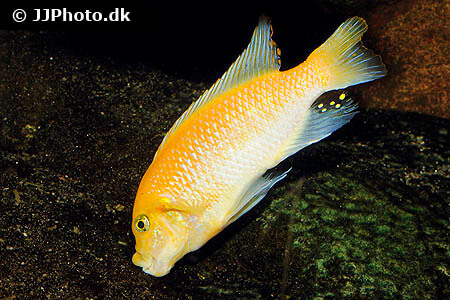 Tank mates should be chosen with a lot of care and should consist of other species from Lake Malawi. The jewel cichlid, also from Africa (Rivers - Nile, Niger, Zaire) are thought to be able to be kept with zebra cichlds. These fish are extremely aggressive and if a peaceful view is desired when one glances at the tank, then these fish are definitely not the type to get. More males to females are advised. Males establish territories and defend them, while females tend to school.

Best results in breeding is achieved by having 1 male for every 3 females. A displaying/shimmying male is usually trying to coax the females until they get them to breed. The female spawns on a flat rock or in a cave at the bottom of the tank and as many as 60 eggs can be laid. She then takes the unfertilized eggs in her mouth, following the male closely until he releases the sperm. The egg spots play an important role as it is thought that the female believes these are more eggs and goes to retrieve them and at this moment the male releases his sperm and fertilizes the eggs in her mouth. Unlike the South American cichlids after mating the male and female go their separate ways and the female cares for the eggs/fry herself. The eggs are rich with yolk and take a long time to hatch. Once hatched the yolk sac takes about 20 days to be absorbed. Being mouth-brooders, the female carries the eggs in her mouth until the eggs hatch. Newly hatched fry can be fed daphina and dry foods. 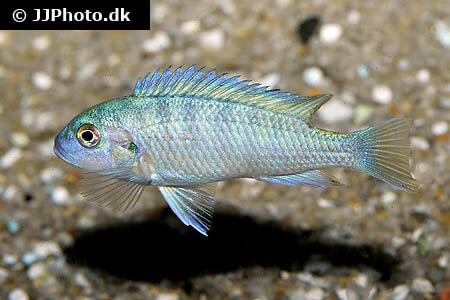 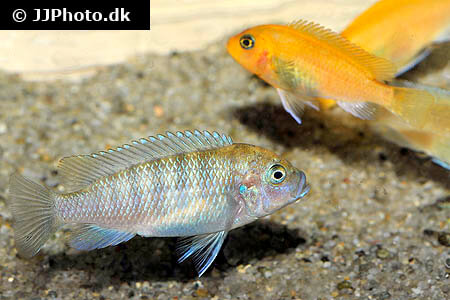 Temperament / Behavior: Can become territorial with males of their own species and does better with similar species with compatible water requirements.

Tank Mates: Other similarly sized cichlids that are have similar water requirements.

Diet: Primarily an herbivore but provide a variety of foods for optimal health.

Sabi is from South Africa and started fishkeeping with goldfish five years ago. There after the hobby slowly but surely grew. I've kept Goldfish, Koi, Malawis and now tropical freshwater fish. I currently have two running tanks, a 67 gallon and a 2 gallon. The 67 gallon aquarium is a community tank consisting of Angelfish, Tetras, Rasboras, Plecos, gourami and corys and the in the 2 gallon I may add a betta. I one day hope to breed either Discus or Angelfish.

Tom has had fish since he was 3 years old. When he was young all he had were the typical betta and goldfish in one of those goldfish bowls. He didn't really go to a big tank until Feb. 2006, when he received a 36 gallon tank from his uncle and Tom and his dad created a beautiful stand to hold the aquarium. He started with having 4 platys and 2 harlequin rasboras. After overstocking his tank with platy fry, he got a 28 gallon hexagonal tank from one of his other uncles. He then transferred all the fry over to that tank and also put an angel fish in the tank. Then in Feb. 2007, he got a brand new 10 gallon tank which he moved all the fry in until they were all sold to local stores. In March 2007, he upgraded the 28 gallon tank to a 37 gallon tank. 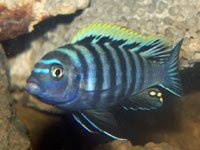 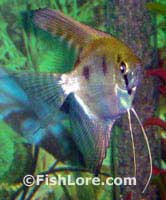 Pterophyllum scalare
Freshwater Angelfish
Can be temperamental with other species when they pair off.

Cyrtocara moorii
Blue Dolphin Cichlid
A popular cichlid that needs a larger aquarium. Really pretty shades of blue depending on the aquarium lighting they are under.