Member
LOL. Ok, not really since he isn’t eating brains. But I’m so confused by my SA bumblebee catfish. I’m assuming he’s sick... but I’m not sure.

I know literally nothing about catfish since my experience is with livebearers. But I have 2 bumblebees now. I’ve learned they like to hide and don’t come out often when the lights are on. That’s about it.

And of them is like the living dead (hence my zombie reference).

He doesn’t breathe! I know that’s impossible, but I stare at him for the longest time and I swear he doesn’t move. I thought he was dead a handful of times already. I even went to scoop his body out of the tank the other day, but then he darted away like nothing was wrong. So weird!

I was relieved he was still alive because I love these guys now. They’re really sweet and amazing fish. But I’m just so confused by it.

The other bumble comes out occasionally for food. He’s hiding all the time too. But at least I can always tell he’s alive.

Is this normal or is something wrong with him? How can I observe a fish that is by nature of his species, always hiding?

In case it’s relevant, I had camallanus recently in another tank. I’ve never once seen any indication of worms in my bumblebee tank. But I treated them with levamisole twice as a precaution anyway. I’ve also been doing water changes every other day (again, precaution for any camallanus eggs but prob not necessary). Prior to that I was doing them twice a week anyway.

I use prime and nothing else is added to the water.

Ammonia: 0, Nitrite: 0, Nitrate: a little less than 5
Temp: 78/79
Maybe he’s unhappy because the pH is so ridiculously high. But it’s been that way since I got them 2 months ago. The other bumble doesn’t seem bothered and I’m not sure what I can do about it anyway. Since it’s so high in my tap as well... it’s over 8 but I don’t know exactly because it never matches anything. I don’t understand why. I have no problem reading anything else on the API kit.

The photo is obviously not the API tube, but it’s the same 5ml measurement FYI. The glass tube shows the same color. 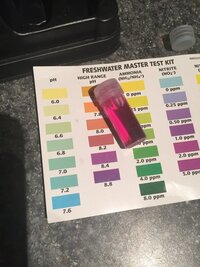 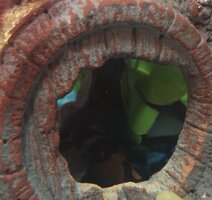 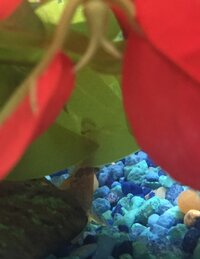 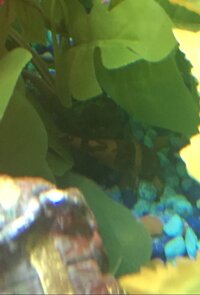 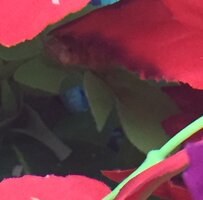 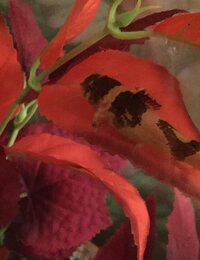 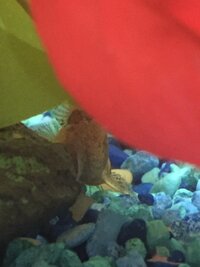 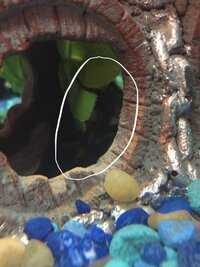 Member
8.0 ph..wow..my water pipe gimme 7.5..adding drifwood,will go down about 7.35..if to high I just put couple bottle RO water..I think your catfish doing fine..its remembering me back when I'm still at middle school..when hunting catfish during river water cloudy muddy..happen after heavy rain stop..but if not rain season we do hunting them at night time..try look them at nighttime..they can't stop moving..this fish just try to make u boring until u feel wana trow them to river..not feed,not swim,not taking air,hiding,tail turn up,turn upside down..they will doing unrelated to fish good behavior..haha..but catfish can live in mud for a month waiting rain season in habitat..happy catfish..beware,u may lost other comunity fish without a trace..catfish is eat everything that fix their stomach in one go

Member
Driftwood, alder cones, and Indian Almond Leaves are all ways too naturally decrease pH. Maybe try one of those and see if that'll help bring it down to a readable level? Don't do too much in a day, though. Some guy threw a whole bag of alder cones into his 15 gallon tank, and everything died except for a pleco. My guess is the pH crashed. I'd do one stem/per day, or a single IAL per day or so, check the pH, and then add more, gradually working the pH down. If that's your goal. I don't know much about these cats. I imagine they're nocturnal, like most.

Member
mine would only come out of his hiding spot for food.