Gender: The easiest method is to look at the analfin. Male fish have an Andropodium (similar to the Gonopodium of livebearers such as the Platy), which is a tube shaped organ. Fully grown females are larger than males. Male fishes also have a red patch on the dorsal fin which is absent in females.

Notes: The Wrestling Halfbeak is a bizzare aquarium species, and gains it's name from it's unusual 'beak' shaped jaw. Many specimens can be rather skittish when first introduced to an aquarium, with reports of them crashing into walls as they frantically swim around when panicked. However, this behavior usually stop after they get used to the tank.

Because this fish is quite delicate, it is best to keep it with other small community species like Tetras, Rasboras, Corydoras, small Livebearers and small Rainbowfish. However, whilst the Halfbeak is peaceful to other species males can be quite aggressive towards each other; often locking jaws and bickering. In it's native countries, locals sometimes bet on the victor of these fights in a similar way to Betta fishes! However, it is possible to keep a group as long as there are plenty of females to each male or only one male.

This is a carnivorous species and usually enjoys live food and similar meaty products, but can be fed on aquarium flakes. As with most suface dwelling species, the Wrestling Halfbeak is an acclaimed jumper so a tight fitting lid should be provided on the tank.

Floating plants will also help with this, and should be included in the tank to provide a retreat for the Halfbeaks. Interestingly, this species can also be kept in slightly brackish water although this is by no means a requirement.
Image: The Wrestling halfbeak is a surface dweller by nature. 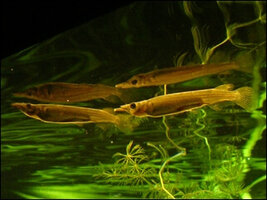