Would It Be Possible To Reinforce These Boxes For A Stand?

I'm trying to make a DIY stand for my 20 long. I was wondering if these boxes, reinforced with 2x4's would be able to hold the tank. They were used to transport bags of road salt/windshield wash and are pretty heavy. They're 22"x14", so I would need to use 2 next to eachother and I would probably put one big sheet of plywood over both.

Any tips/suggestions would be greatly appreciated. If these can't be used, I'll just go back to my cinder block idea. 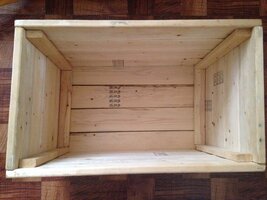 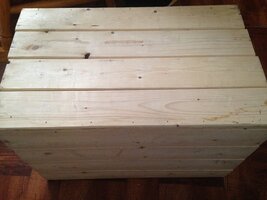 Place them side by side and put the topping on them, they should hold (have you tried standing on them? if they hold you bouncing on them they should hold a tank, a 20 long is just under 200 lbs completely filled with water and the tank weight, I don't know who thinks water is 10 lbs...)

They appear to be too roughly made for an aquarium stand. It looks like they're tacked/stapled together. They also don't appear to be terribly even in construction, which means that when you put the plywood on them (hopefully at least 3/4") that it wouldn't be evenly supported. If you were to take and add wood screws everywhere wood joins wood, and saw/plane them perfectly level, and add your 2x4s, they might work, but I think cinder blocks would be far easier.