I purchased medium sized angelfish a couple months ago. I have 3 of them, they are housed with my 2 blood parrots. I've noticed one of my angels getting bigger and bigger (the belly) i'm a little worried. So I kept a close eye on feeding time last week. And saturday I gave them peas and no food the next day. This morning my angel is still huge!

It seems to be swimming ok and has quite the appetite. And the other 2 are fine, they don't have a swollen stomach. It's my favorite angel! My pearlscale, I don't want anything bad to happen. Can anyone figure out what's going on?

Is there anything extra I should do?

That must be dropsy which is a bacterial infection which caught early should not spread to the other fish like ich for example. I've had this way long ago but not with one of my angels. Seeing that you seem to have caught it early you can hospitalize the fish in water with one tbl.spoon of salt per one gallon and/or a broad antI bacterial med. should do the trick. If this is not done the fish will not live and others could be infected. This was due to some ongoing stressor recently such as large/too many water changes, temp drops etc.. Think about what's been done differently lately seeing that the nitrite/nitrate levels are ok. You can use the med in the main tank if no quarantine tank is around and even the salt maybe-hmm..? Most Catfish don't like salt.

Are the scales protruding?

My first thought, your Angel can be gravid.
OP
B

I don't have catfish. I can add salt to the tank.

I have a 75 gal tank with a canister filter and 2 sponge filters. I only syphon/do a 20% water change weekly. My canister gets rinsed every month. My sponge filters haven't been touched i've only had them when I got my angels. I don't have my QT tank at the moment

This sucks. Idk how it could have happened

The scales are not protruding. What does gravid mean??

Maracyn II is the med. I used for stuff like this in the past. I see that you have no cats or scaleless fish so that's good. Water quality problems are usually, but not always, the culprit but you seem ok with that. I'm not saying its dropsy but I would strongly think so because a swollen belly is the classic symptom of it and relatively common. This infection exists in most/all tanks but only becomes a problem when the immune systems are compromised. Way to go on the sponge filters by the way, (I'm a firm believer in them) and I have angel's so I feel for you.

p.s. oh btw if you med. the main tank which you will have to due to a lack of a quarantine you will also ensure that the others are medicated early and have a great chance of survival if they were to become/are infected also.

Before you start medicating your tank, I suggest posting a picture of this Angelfish so we can determine what is the problem.

Thank you, I love my sponge filters! I think my fish do to I'll do my best to treat the tank as soon as I can. Until I get medicine, will the salt work? My tank is heated at 80. Should I raise it a little more?

Oh ok I will try to get a good picture. I will be right back 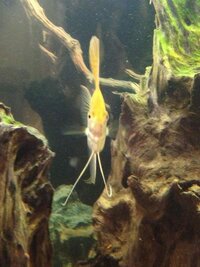 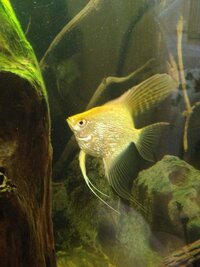 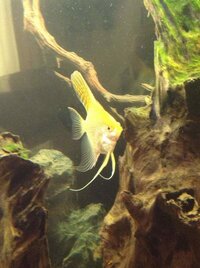 Sorry for the bad quality the pictures don't show how much her belly is bloated but hopefully you can see something.

I don't see anything wrong to be honest.

I wouldn't add salt to tank that has Angelfish.
OP
B

Ok I did my water change but did not add salt. I wanted to wait for you guys to answer

she is more fat then the others, but I guess I shouldn't worry

Thanks guys!! I'll keep you updated

I hope she is with children but look up dropsy anyway and be ready to get some Maracyn II just in case. I know a guy here in town who sells Cuban cigars by the dozen-that was a joke mr. moderator.
OP
B

Hahaha thanks for the tips