abbytherookiehuman
Member
The only reason i didn’t put this in a specific mountain minnow thread was that this problem probably happens with other species too so general advice would be great.
i have successfully bred wcmm 3 times. The first time i didn’t know about them for the first 3 weeks as i was on holiday but once i got home and fed them they ate lots and grew up quickly. They would have been born on Halloween last year. Next batch i found after taking the fish out of the pond in January because of a big storm causing the pond to flood.At first they were growing quickly but now there are two big ones, much smaller than the adults and one that’s the same age but much smaller. I recently moved them into a bigger tank and they’ve grown a bit but not much. The third batch was also a surprise. Somehow the eggs got transferred into my daphnia culture tank and they’re about 2 weeks old now. They’re pretty much the same size as they were on day one and neither of the two last batches show any interest in any food i provide. I’ve triedflakes, daphnia, mosquito larvae, peas, first bites and pellets.None of them eat anything i give them but theyre still alive so must be eating something. The second batch should be big enough to join the parents by nowbut they aren’t.
has anyone else had problems getting dry to eat? What can i do?
Flyfisha
Member
I have a bit of experience with tiny MOUTHED fry . Yes I have had WCMM fry as well.
I you have a spare tank try raising the fry in a green water soup with no filter just an air stone .That is as close to culturing infusora as I can maintain. If you don’t have a spare tank you could try culturing infusora in a jar.
abbytherookiehuman
Member
so just keep them in green water?
Flyfisha
Member
Green water is of most use in the first 3 or 4 weeks while a fry month is so small it can’t eat micro worms or even vinegar eels but only eats live food. ( bugs) . It is a lazy way to grow out slightly older fry . That pencil fish in the snapshot is half grown and could have been removed much earlier. Below is a day old fry or two in very green water. It’s not an ideal snapshot to praise the use of green water that is why I used the bigger fish.
I have used green water tanks on a few different species with great success. 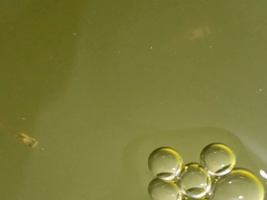 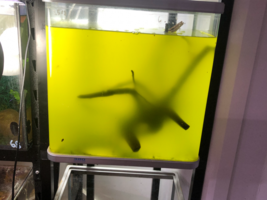 You must log in or register to reply here.
Similar Aquarium Threads

Whats the next fish you are getting?