This Sunday was gravel vac, 1 of 2 filter cleaned, and 25 gallon water change for my Mbunas. The tank was disassembled 2 months ago due to under gravel filters and the 8 year old aquascape was dismantled. I have new drift wood coming in two days and rocks will be hunted down while on vacation. I was worried about aggression due to the reduction of caves and hiding spots but they have done very well. I guess I
Cichlid.jpg" data-xf-init="lightbox" data-lb-single-image="1" data-lb-container-zoom="1" data-lb-trigger=".js-lbImage-attachment291628" data-lb-id="attachment291628"> 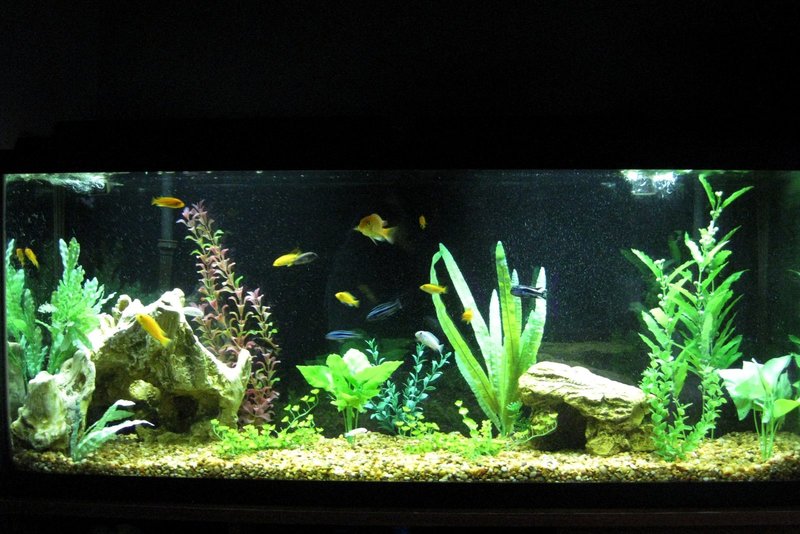 wanted to post something positive. I was just on a thread where one contributor wanted to put a spike in the head of any fish that was not shiny, new and beautiful. It is so not what I, or a lot of people here, would do if one of our charges was suddenly not "beautiful" So that's my rant and here's my picture of something that will change drastically in a couple of months. Happy fish keeping to you all. Have a great week.

Nice! I already see some Yellow Labs in there, can I know the stocking of the tank? (Sorry I'm curious )
OP

I don't normally list stocking on this tank because people who don't keep Mbunas don't understand why we overstock. Then there are people who think "well she's done that for 25 years so I can do that" and all of the sudden I see peacocks and haps in with the Mbunas. This tank gets a 20 gallon water change twice a week. People start off well with that but as months go by they start to slack and it's once a week, sometimes once every two weeks. You just can't do that with these guys. (Not new information for you Edward, but others may come across this) There is no breeding attempted here and I have never really paid attention to the male/female ratio. The tank is kept a 76*-77*F. (The higher the temperature, the higher the aggression within the tank. Mating behaviors would start to show at higher temps as well) So anyway...Several of the Yellow Labs you see are Red Zebras lol. (Don't know why they photographed that way)
Yellow Labs - 4
Red Zebras - 5
Electric Blue JohannI - 4
SocolofI - 2
AceI - 2
Albino JohannI - 1
Stocking probably won't change very much this year (Unless I can find my Albino Johannis. I usually keep four but I can't find them. I added the Socolofis and Aceis to try them in this mix) I'm down to only 4 older fish, Two six year old EBJs, Seven year olds Red Zebra and Yellow Lab. But they all look great and I don't see them swimming on any time soon. The only Mbuna you will never see in my tank is a Demansoni.

Sounds like a nice stocking. I'm going to assume that the king of the tank is either one of the socolofis or one of the Yellow Labs (correct me if I'm wrong)

Personally, I have 4 Yellow Labs in a 40 gallon and I have no intention of breeding them at all. That's why I bought 4 males and no females.

Having an African Cichlid tank either Peacock, Haps or Mbuna is still a big responsibility. Without the correct stocking the entire tank can turn into a slaughter fest. African Cichlids such as Yellow Labs are sold as easy beginner fish in my country. Even though they are relatively easy to keep, people are usally un aware of their needs like high PH levels and the fish die at a young age.

When I first got my 135 gallon, I wanted to go with Peacocks and my Yellow Labs however, after getting my Blood Parrots I changed my mind and my tank has turned into an American Cichlid tank. I can't even have plants with them, the Severum will either eat them or the Blood Parrots will demolish them.
OP

King of the tank is a Red Zebra, my Labs are actually my most chill. Socolofis have been pretty calm and they have attained a good size. I'm very pleased how they have fit into the mix. (My pH is 8.0 so of course they do great but my community tank does well too. I don't play the buffering game so they have a consistent 8.0 as well.)

KimberlyG said:
King of the tank is a Red Zebra, my Labs are actually my most chill. Socolofis have been pretty calm and they have attained a good size. I'm very pleased how they have fit into the mix. (My pH is 8.0 so of course they do great but my community tank does well too. I don't play the buffering game so they have a consistent 8.0 as well.)
Click to expand...

Interesting. Well then, Best of Luck and Happy Fish Keeping!

KimberlyG said:
I don't normally list stocking on this tank because people who don't keep Mbunas don't understand why we overstock. Then there are people who think "well she's done that for 25 years so I can do that" and all of the sudden I see peacocks and haps in with the Mbunas. The only Mbuna you will never see in my tank is a Demansoni.
Click to expand...

I am by no means an expert on Mbuna but I have kept them successfully for 2 years with only one loss so I must be doing something right! (except that one loss was 100% my fault...due to lack of research). But they are breeding machines so they seem happy - water parameters are always perfect, except the constant fight with Nitrates, but that comes with the territory of being overstocked. Upping my waterchange game and getting some plants is helping a ton.

I have 24 fish in a 75 gal, which sounds like a lot but if I wanted to up my maintenance even more I think 3 or so more would still be ok, I am very overfiltered deliberately as well (FX4 + HOB + large sponge filter). I have haps (Livingstonii) in with my Mbuna, which I read after the fast was a no-no, but they get along fine, normally the mbuna are so pre-ocupied with the million things they are up to they leave the haps alone, that and the largest fish in the tank is a hap - the alpha of my tank is a Greshaki, he will whoop on anyone who gets in between him and his 6 females I had two males in there, but sold one off about a month ago because the two males kept fighting and he kept losing - so wanted to take care of that before either of them really got hurt.

Why the demasonI comment may I ask? I have just a single one in there, mostly because there was only one sizable enough to have a chance in my tank at the LFS. I did get a larger 4" one or so and he was a jerk, took over half the tank so he went back. I have heard they can be really mean, is that why you said that?

I had another issue the other day with the (what I think are haps as well, the guy in my profile pic), they were getting along fine for months but they decided to wail on eachother this weekend. I have one that got damaged scales separated, once healed I will give it one more chance and if not I will sell one of them off. (I think they are both males as well, I got them traded in to a LFS, so not 100% sure what they are) 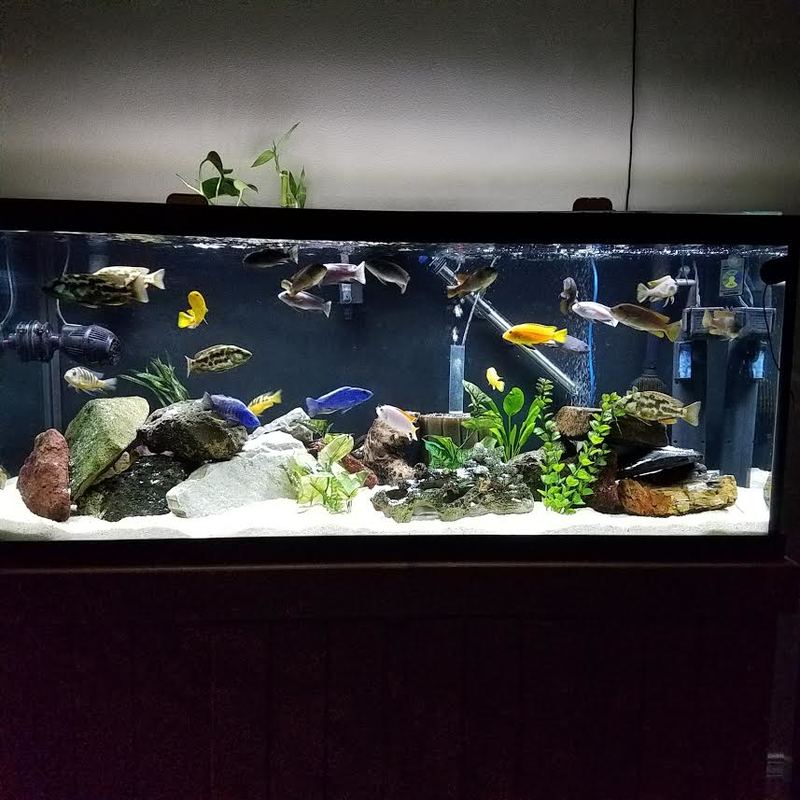 Beautiful tank! Thanks for sharing. I had two Demosonis probably 15 years ago. My husband brought them home by mistake. (They look nothing like the EB Johannis I asked for so I don't know how much of a mistake it was. I think he liked them.) They were the trouble makers in the tank almost from the start. I didn't have any deaths associated with them but they were the tank bully. When adding new fish I would actually put a divider in the tank and keep them on the other side for two days. One was definitely worse than the other and I know it was probably just that certain fish. We've all had "That Fish". When they eventually passed, they were not replaced. I guess I just like to stick with the mix that has worked for me all these years. The Socolofis have been a pleasant surprise. I would probably add those again. I have some older Mbunas that age wise could pass in the next year or two. These are the fish that my children grew up watching and now the grandchildren are glued to the tank. They have been a lot of work, but so much more of a joy. When my fish keeping days are over, this will be the last tank standing.
Share:
Facebook Twitter Reddit Pinterest WhatsApp Email Link