Will This System Design Work?

Chris Osborne
Hey all, I am new to saltwater, but have been in freshwater for years. Having been so I have tons of excessive hardware and stuff, but have no experience with a sump or refugiums. Do you think that this system design will work? Overflow is on the left side. Any advice will be greatly appreciated. Thanks! 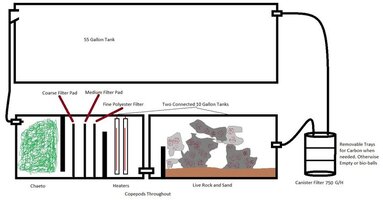 stella1979
I have to admit, I have zero experience with sump design, but I think this looks pretty good. The only thing I question is that most sumps I've seen are set up so mechanical filtration takes place first. Usually, the overflow first hits a filter sock or two, before going onto other chambers. I can't say your idea is wrong though, as again, I have no personal experience with sumps. I run a 20 gallon closed system, but I know of a few here who might be more helpful than I. Wild Bill Nart Jayd976 grantm91 Reeferxbetta Sprogladite
DutchAquarium
I would actually move the Chaeto to the live rock and sand area and then put a protein skimmer in the chaeto section. Also you want a shut off valve on the tube running down to the refugium.
Jayd976
I agree with Dutch about moving the chaeto over to the LR section. I do potentially see some issues here. Are you planning the return line to be up that high in the sump or is that just a quick rendering? The reason I ask is as water in sump starts to evaporate the water could fall below your pickup line and burn out your canister from running dry. With that said why a canister and not just a plain return pump if you don't plan on running anything in the canister other than carbon and bioballs? Also, two connected tanks could be a disaster if a seal lets go. Why two connected tanks opposed to one solid tank of equal size?
grantm91
Definitely ditch the two tank Idea, Id also ditch the canister IMO don’t use all those filter pads either, use just a filter sock or floss, even just floss in a jug with holes hanging on the sump will do. Look up sump designs there are some smart ones on the net, you need to do some idea stealing lol, its good your doing diy as you can fully accommodate your own specific needs.
Reeferxbetta
I would ditch the two tank idea like grantm91 said, unless you're like me and you're restricted in space so you have to use two, in my case, I can fit an about 20 gallon sump using two sumps, only using one, I can only fit about 7-10 gallons, because of the design of my stand. You'll be far better off with a 20 long instead of two 10s imo. Like everyone else was saying, I'd move the chaeto in with the live rock and have that as your fuge, rather than have it kinda all over the place. Overall, I think the design is pretty good, it just needs a few modifications. Do you plan to have a skimmer in the sump? My other question is about the canister, is it there a specific reason for it? Being inline with the sump, it doesn't look like it's gonna be too fun when it comes time to clean it out, you'd be better off to leave a small space in the sump somewhere to put carbon, I don't think an entire extra filter will be needed for that.
Chris Osborne
Thanks for all the input! I was going with the two tanks because of the space and stand that I am limited to, but I might try to build a frame that will meet the needs of a 20 long. I don't own a protein skimmer, and when I get one it would go where the filter pads are, (which I will take out if the design now). I had the canister filter in play just because I have it on hand and it pumps a good amount per hour. But it sounds like buying just a plain pump is the way to go? I have the pipe mounted about half way up the tank because I thought if the water goes into the tank low, it might be better to have it go out higher to create more crossflow? As far as the overflow and a turn off valve, I think that is a good idea and will implement it, but if I have my overflow half in the water, and half out if it so that it isn't doing a siphon, but rather just an overflow, and the canister is doing the return, still without creating a siphon since it isn't a pressurized loop, will that work? I also have glass sheet lids that I can use on the sumps since nothing is sticking up and I don't have a protein skimmer yet? Thanks!
Wild Bill
I don’t think it will work very good.

Reasons being:
1. Do you know what size pipe you will use to connect the 2 tanks? You would more than likely need to run them the width of the Sump to get any type of water movement.

2. Head pressure. You’ll have to connect a gate valve in the return line to restrict the water flow so it keeps up with the drain. Imagine it like this, you trying to fill a reservoir with a garden hose, it will take forever because of the gate valve.

3. Your mixing an open system with a closed system. Open system requires more pressure than a canister can provide, where as the closed system (canister), is all self contained and creates the required pressure unrestricted.

It’s a good idea, but in my opinion it won’t work and you’ll just flood the floor.

As for the Sump design itself, you would be better off running a single Sump. I have seen double sumps, but they both have a separate return pump.

The drain on the left would barely fit my skimmer at 8 inches.
The return on the right would barely fit my return pump.
The design wouldn’t give me the flow I needed for my tank, so I went with a real Sump (Eshoppes) and almost doubled my water flow thru it.
Chris Osborne
Gotcha! Thanks!