I usually look for good deals on fish stuff and try to get local big box stores to price match. I bought an Aqueon 100w heater from Petsmart back in Feb. They price matched and I had a $10 off coupon so it ended up costing $10 which was perfect for a QT. I normally get the Pros because they have lifetime warranties but they don't carry the Pro line and this was a great deal but it has a 1 yr warranty.

While doing some tank shuffling, I had to pull the heater out and noticed the contacts inside the glass tube were green with corrosion. Upon further inspection, the metal tabs that solder into the PCB was rusting. I had another 100w about the same age so I checked that and it was fine. I contacted Aqueon and they said as long as it holds the temp, it's fine. Not a good response. After pushing the issue, they said they would replace it but needed a receipt. I didn't have one and it didn't show up on my online account that usually shows every purchase. I contacted PetSmart and they found the receipt. They also said that I could bring it into one of their stores for a replacement even though it was outside their 60 day warranty. I'm lucky to have at least 10 PetSmarts within 10 miles from me so I called the closest one and they had it in stock so they could exchange it. A much better option since I didn't have to mail the old heater out and wait for a new one. It was a painless exchange and they were very nice about it. I had 2 TopFin heaters from a kit that failed and they exchanged it w/o a receipt since it was their brand and didn't even ask how old it was. The other Aqueon 100w was a replacement for a TopFin because 2 failed within a few weeks.

I already ordered an Aqueon Pro and 2 Cobalt NeoTherms but this is a good backup for heating water in a bucket for w/c's.

That's great! It's good to see nice reviews like that!!

That's awesome! Good customer service is always greatly appreciated from me! I couldn't even tell you the closest Petsmart to me though.. probably 2+ hours

I need to do that. The old heaters are pure trash! The news one i'm addicted to.

I posted a negative thread about Aqueon's response last week. Unfortunately, they make the best reasonably priced heaters (Aqueon Pro). This all happened just after I ordered another Pro 100w heater and was tempted to return it but had to use it because of this one. I needed a couple more heaters so I decided to try a Finnex HPG 100w and a couple of Cobalt NeoTherm 100w. The Finnex is awesome but too big for a 10 gallon or 20L. The NeoTherm just barely fits a 20L with substrate.

Here's the Finnex next to the faulty Aqueon for size reference. Notice the temp prob on the far left. That's part of the Finnex heater. The adjustment button is on the cord next to the plug. 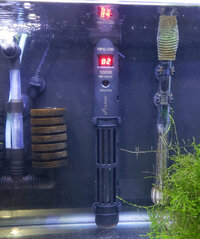 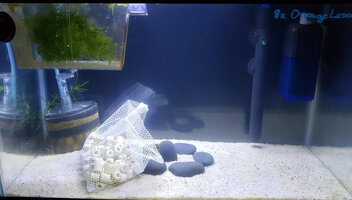 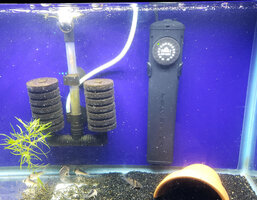 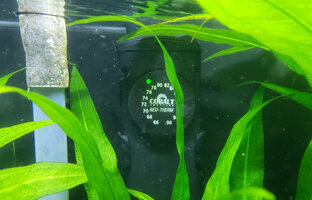 Further Proof of Eheim's diminished footprint in the US.