abbytherookiehuman
Member
one of my minnows whom I previously decided is female is constantly swimming at a downward angle and the second she stops she begins to float up. I thought she was a she because of her swollen belly but now i’m wondering if it might be swollen due to illness. I thought swim bladder at first but apparently that had the opposite symptoms. everyone else in the tank is doing fine but i’m worried about her. she’s also tilted to her side a little. iv whist seen her poop and i’ve also noticed her red stripe isn’t straight so i’m actually confidant in her being a her. there are 7 wcmms in this tank, two in a breeding tank and three surprise babies in a grow out tank. should I move her into isolation or into the breeding tank or something? 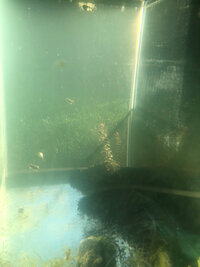 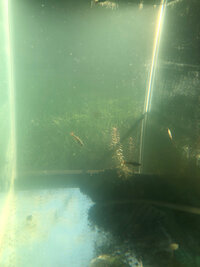 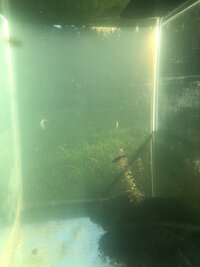 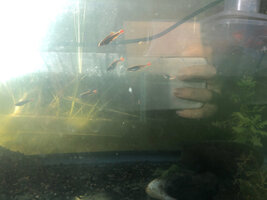 EmbersToAshes
Member
Hopefully it is just a minor case of bloat. How long has she been having problems swimming? One of my glass catfish just had a similar problem. After a large feeding he started to show the same behavior. I didn't feed him for a day and he made a full recovery on his own. Maybe he accidentally swollowed some air while eating a flake off the surface? Did you notice it after feeding? I would make sure he's not getting picked on and skip feeding for a day and see if she returns to normal. If she gets worse or develops new symptoms it might be something more serious. Others with more experience in fish disease may see something I don't though. Good luck!
Sprinkle
Member
Your tank water seems to be dirty. I would recommend you doing 50% water changes daily and try to give that minnow de-shelled cooked peas in bite size. Also, how much food and how often do you give them?
abbytherookiehuman
Member
I usually feed them some daphnia, mosquito larvae or seed shrimp. Occasionally they get flakes but they always finish their food straight away. The water is actually really clear I think it was just the lighting/ glass. I didn't notice anything yesterday but I didn't get a good look either. I'll have a better look this arvo and get back to you guys on her condition
abbytherookiehuman
Member
Looks like she's recovered nicely 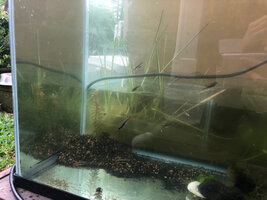