Where Did You Buy Your Female Betta?

I'm thinking of starting a sorority tank in the future, but I only ever see these teeny tiny poorly colored female Bettas in the pet stores. I would most like my get them from Petco in the future.

Where did you guys get your fish from? What does she look like after some TLC and a nice home?

I've only had two, one I got from my pet store the other from a member on here. The girl from the store was bought as a fry and coloured up to be purpl/red/teal. The girl I got from another member is a like pink bodied and darker pink/purple on her fins. She's currently my avatar.

I had gotten 3 at Petco and the rest from an aquarium specialty store; They were very young and those were the only other young ones I could find to round out my sorority. They colored up really nice and became more vibrant too after living in good water. It was really nice to see them grow up together too. I love sororities. They're so much fun!

I got all my females from Petsmart, since they are the only store in my area that sells females. Most were about 6 months old, except for Rosy. They all turned out to have really nice colors (purple, cambodian red, blue).

However, I would caution you against sororities. I did tons of reading before I set up my sorority, and it was going fine for most of the year, but then they started fighting with each other. Two of mine were killed. The two that were left were fine with each other, but I still separated them anyways. So keep in mind that it could fail at any moment, and when you're picking females try to pick the less aggressive ones.

I got my girl from petco. She was very small and has grown and definitely has quite the personality. Her color hasn't changed any but that could just be me luck

I get all of my bettas from Petco. I hate supporting them by giving them money, but all but one of my bettas have been rescues from Petco (ones with various illnesses/deformities that most people would overlook), and if I can't help the fish by stopping Petco from selling them, I can at least help by giving some of them a good home. It's almost like the fish version of getting a dog from a shelter.

That being said, here's the female baby betta I got a few weeks ago 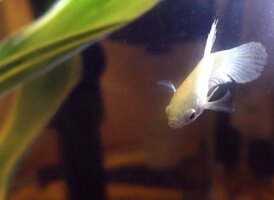 I don't have any females, but I've seen a lot of lovely ones on Aquabid. There always seem to be more females offered by US sellers than males. Maybe the males just sell faster?

I got mine from ebay from envyaquatics. Have you thought about how you will set up your sorority?

I got mine from ebay from envyaquatics. Have you thought about how you will set up your sorority?
Click to expand...

I'm not sure yet. It'll most likely be in a 29 gallon I have, but way in the future.

Where Did You Buy Your Betta?
2

Feb 28, 2021
FoldedCheese
How young do stores sell bettas? How to tell rough age of betta?