When The Husband Orders You To Buy A New Tank...

KimberlyG
I have a really difficult corner in my family room that joins another 15" corner. Nothing fits there. My husband knows that I've been eyeing a certain tank and had been at the store several times to measure and remeasure it. He mentioned a couple different times that I should go get a tank but I had seen where I could have gotten it for $249 once and I was waiting for that deal again.
After we got home from Easter dinner, he told me he knew I had a busy week coming up but there had better be a new fish tank up and running by the end of the week. The ensemble was on sale for 1 more day, but it was $299
I went and bought it anyway. It sat empty in the house for a couple days until I had time to get the corner ready and be home all day to wash sand, fill, and observe it for any leaks. I started washing and dumping different elements in until I thought I had enough of everything but plants.
The filter arrived in 2 days, not the 10 days that was stated, so I hooked all that up and got it running.
My husband kept going to the tank and saying "I can't wait until there are fish in here". I told him that since the angels had only been in QT for 2 weeks, it would be at least another month.
I gave in and added the BNs and EBAs for him. When I checked ammonia 24 hours later, it was at about .25 so I cracked open the canister and seeded it. When I tested about 6 hours later, everything was at 0. I'm just starting to get a tad bit of color on nitrates.
I jumped the gun by planting a crypt but they got a new plant shipment and I liked that one. I have the fertilizer but the capsules won't be in until later this week.
I love this tank, but more importantly, so does my husband! 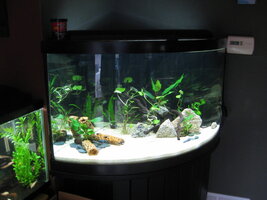 Beautiful tank, too!
Susiefoo
You have an excellent husband!

Really beautiful tank. I love how you've kept it light and clean-looking.
TexasGuppy
I have the same tank.. I like your white sand, I have black background and black sand, so not enough contrast.. looks great with your plants and rocks!
Fanatic
Congrats Kimberly!
I like when my parents insist about something with my tanks, usually my mom doesn't care, except when it's time to feed my bristlenose.

"Throw in another squash, he looks hungry!!"
DoubleDutch
Hey Kimberley,

Are these insisting partners also available in "female"
abovo
I have had the same tank for the past five years. I really like how it fits in to the room. Your setup with the light colored sand is nice.
KimberlyG

Are these insisting partners also available in "female"
Click to expand...

Of course they are!

I have had the same tank for the past five years. I really like how it fits in to the room. Your setup with the light colored sand is nice.
Click to expand...

Thanks, I like the way it came together. The white sand was primarily chosen because of my orange lazers. I've had them in a 55 with black sand for several months and it just doesn't do the fish justice. They won't get moved for several months until all the inevitable new tank problems get worked out.
Nanologist

Are these insisting partners also available in "female"
Click to expand...

I wouldn't have my saltwater nano reef or the betta if they didn't!

THUMBS UP...It's beautiful.
Ohio Mark
Umm.... can your husband have a word with my wife and talk to her about the importance of new tanks?
jmaldo
Impressive! Not a fan of the white sand but you make it work. Nice Job!
stella1979
Great story! The tank is absolutely beautiful, and you're husband certainly is a keeper. So's mine... As much as the reef is my little baby, I wouldn't have that tank if it weren't for him.
GrayGray4231
I love that tank!!
KimberlyG
The gel caps came in early so I spent the night filling 500 root tab capsules. I only used half the bottle of Osmocote so I can make another 500. I won't be using a lot so I will leave the other 500 gel caps empty but I could have made 1000 root tabs for $20. As you see I have easy, low tech plants so these should do fine. 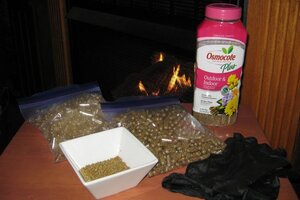 KimberlyG
I wanted to add a couple more plants. Not so sure I wanted it to look this dense. I'll wait several months until they start to grow and see if it has grown on me. I now understand crypt melt. I never knew what all these people were talking about but I do now. It is the strangest thing, I personally wouldn't call it melt, it's more like dissolve. I only had about 4 leafs dissolve on two different plants so not bad for newly planted crypts. 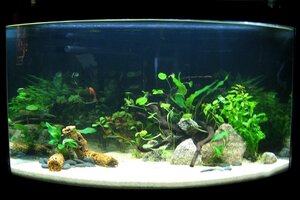 ljm0104
I've been considering a corner tank over a 40 gal breeder just because of weird house dimensions and I think you just convinced me is it a 55 gal?
Dawn Michele
Beautiful tank!!
Thunder_o_b
You have a good one there
86 ssinit
Nice looking tank!! I also don’t care for white sand or sand either. But you make it work. Don’t add shrimp or it will look like you have mice in there . Now you have me looking at corners .
KimberlyG

I've been considering a corner tank over a 40 gal breeder just because of weird house dimensions and I think you just convinced me is it a 55 gal?
Click to expand...

54 gallon.
KimberlyG
I have two beautiful standard 55 gallons already, but this tank is now my favorite. Because of the shape, I can provide hiding and cover along one entire length of the tank and still have ample open space in the front of the tank. It is a better setup than I imagined when I bought it. I would buy another if given the opportunity.
varmint
My only comment to all this: ENVY! Cheers.