What's Wrong With My Frogbit's Roots? 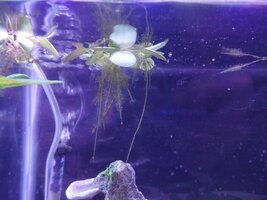 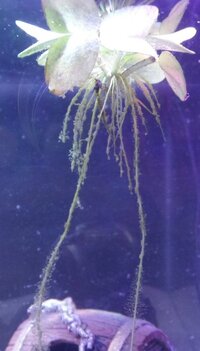 I have frogbit in 4 tanks. In 3 tanks, they are healthy, green, with soft projections from their roots, but in my fourth tank, they look like this. Clumpy with brown bunches on them. They're not diatoms, since I have them in all 4 tanks, but only this frogbit looks like this. This fourth tank also shares a 48" light with another tank, so even the lighting isn't the cause. In the photo with the betta leaf, the brown clumpy stuff is resting on that leaf too.

Issues that might be relevant: I had this betta and plants in a custom 3-d build that failed. The protective clear paint layer was flaking off and floating around. I moved everything into a brand new tank including the cycled filter. My 3-d build also had diatoms and green algae like crazy, but the frogbit also had this brown clumpy stuff. I rinsed the roots and moved them into the new tank. Is this some frogbit disease? It keeps shooting out new baby plants, but in a few days, the brown clumpy stuff is on their roots too.

Should I toss it and move in clean plants? The anubias has this stuff on its leaves but it doesn't seem affected. When I clean it off, it's very slippery. Algae? Bacteria?

Strangely enough, when I was switching out the betta's tanks, I placed the frogbit in the shrimp tank next to it. I chose not to move 2 plants back into the betta's new tank because shrimp decided to hang on them. Now, those frogbit plants look perfectly healthy. The only thing in the betta tank now is the filter, heater, betta leaf, 5 or so natural rocks that were tested and passed the limestone test, and 2 rocks with Anubias attached. I added a new ornament, but this has been going on since I started the 3-d build. Betta is perfectly healthy, as was the shrimp that was his roommate for a month (but died 3 days after moving him to the shrimp tank).

You've got some green tiny hair algae taking over the roots. Also, pinch off decaying leaves that are still attached.
You can trim the roots and promote thicker new, healthier roots.

My water lettuce had rotten roots when I bought it. I trimmed them all with super sharp scissors and the plants have grown beautiful new roots. You can still see where the old rotten roots were cut. 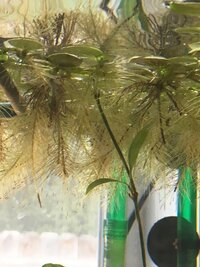 Would adding a lot more plants reduce the algae? I have a lot of frogbit I could put in there. I don't want to reduce the light, since the light is shared with my shrimp tank.

Would adding a lot more plants reduce the algae? I have a lot of frogbit I could put in there. I don't want to reduce the light, since the light is shared with my shrimp tank.
Click to expand...

What kind of substrate do you have in the tank with the frogbit floating?

I took out the frogbit right after posting in case there was something wrong with it. Here's what the tank looks like now, and the whole corner. I do have a lot of algae in the shrimp tank. 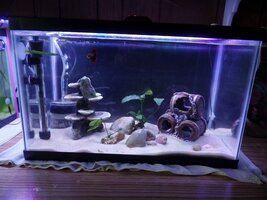