What's the best way to treat this betta?

So for about two weeks I have been quarantining two female bettas together. There was some mild flaring and nipping at first but then the two of them got along perfectly fine until about a day ago and it turns out the one that's actually the smaller female did a number on the larger ones' fins and it even looks like she has some scale damage. This isn't the worst fin damage I've seen but she's not in good shape. I moved the smaller female to a different setup and now I'm hoping I can treat this one. What do you guys think is the best approach? I have bettafix drops I've been adding and I have some melafix in the basement I could use. I might even have some epsom salt if that can help fight infection.
. 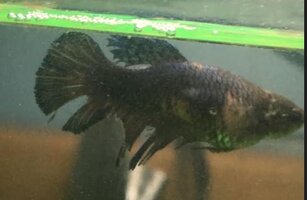 Perfect! Thanks BigManAquatics! I'll start some salt treatments tomorrow! Fortunately she still swims normally and has an appetite.
You must log in or register to reply here.

I'm stumped on this one - I'd appreciate some advice.

What is fastest treatment for fin rot