Hi guys, I have a 20 Gallon tall that has been running for maybe a year or a year and a half.

It has a big driftwood near the surface, some real plants and some fake ones. It was all real plants at first, but since my current filter is a bit overkill at the moment (AC50) , all the long plants were getting tangled around the intake and it was just making a big knot inaccessible by the fish, so I removed some and added fake plants instead. I kept real plants in the foreground.

Before I changed the long plants about 3 months ago, the Khulis were often seen, especially at meal time, but even regular time, but since I changed some plants their new hiding spot is in the background and we don't see them at all anymore (except if I flash a light at night I can see them perched in the plants). So it is kind of empty in the bottom of the foreground.

I was thinking of adding some cories, but here is my dilemma :

- If I go with Pygmies, I could get 6 since they're very small, but I'm afraid they might get bullied by the Tetras. (The black one already got nipped and the Gourami got one of his "spikes" nipped by half)

- If I go with regular ones, I'm afraid that 6 would be too much for the available space since they could get 2.5 inches. I could imagine 4 in my setup, maybe 5, but I'm afraid they might not feel confident enough at that number.

I have an AquaClear 50, and an air stone, lot of floating plants with areas without (for the Gourami to get air more easily) and even though I try to change 50% of the water every 7 days, for the past month I've been at 10 days average. However I know I could get back to 7 days if I add to the bioload. Would it still be overcrowded anyways if I add cories?

I know the Khulis add to the bioload, but since they also scavenge a bit I thought they kinda even out.

Ammonia and Nitrites are always 0, Nitrates are between 5 and 20 depending on how when was the last WC.

What would you guy suggest ?

I also thought about Otos since I also have some purple algae (still not sure if it's BBA, cyno or diatoms) but I'm afraid the BST would kill them. Also though about one single BNP but I think he might be too big for my setup, and anyways I'm sure my GF would not like his nose lol

Otherwise, I'm open to other suggestion of fish I could add to my setup. Already got a Ramizeri in the past and loved him, but I lost him quick (because of my PH i believe : 7.8)

Here some pictures of my current setup (PS : Gravel is smooth, but I have a lot of sand that I plan on adding on top, and enough of it to add more onceit gets between the cracks of the gravel) : 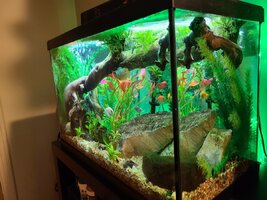 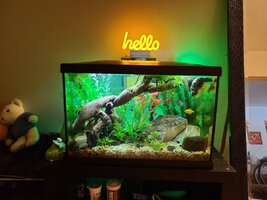