What Should I Do With All Of These Babies?! Agh! 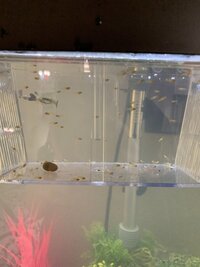 I’ve had two pregnant Platy fish in a 2.5 Gallon “labor & delivery tank.” Last night, one finally started giving birth, and I moved the Platy not giving birth to a new tank I set up for some guppies I bought but hadn’t arrived yet.

I was scooping them out one by one with a little cup and putting them in a breeding box in the main tank until I fell alseep after 6 hours at 6am! I lost count after 40 fry.

Today, my guppies came in the mail, so I tried to remove the second Platy I’d temporarily placed in a separate tank, only to find out she had a GIaNt brood as well! I did my best to get as many out as I could. About 20 fry total died, which still leaves me with 60 or so estimated babies!

We are already up to 7 tanks and no room for more, or more babies!!! What do you guys do with your large broods? I’m overwhelmed here! And there’s still another Platy who is so pregnant you can see a ton of eyes through her belly.

If you leave the babies with the parents, most will be eaten

I agree with the above, I would personally let nature take it's course if you do not have the space to keep all of these fish, esp when they are bigger

Hello, if you have a petco nearby might want check to see if they take in unwanted fish. The one here will adopt them out & give money to pet based charities. Hope this helps!

you can also try and find a lfs they will probably take them. Or put them up on craiglists.

As long as you have females you are going to be dealing with this every month and eventually could end up with several hundred fish. Unless you can provide them with a 1000 or more gallon tank you will have to make a decision.

A tank with fish this prolific needs fast fish that will be able to catch and eat the fry. May sound cold hearted to some but trying to keep hundreds of fish in tanks much too small for them to grow and thrive isn't good either. My zebra danios along with mom and dad molly were great at keeping my molly population under control. I removed a few of the fry but just let nature take its course for the rest of them.

Give them a fighting chance with floating plants and other areas with good cover and the strongest and fastest will survive.

Yes, as harsh as it may sound to some, having the bulk of those babies eaten quickly is often the most humane thing to do...certainly better than allowing a tank to overpopulate and turn into an unhealthy mess so that all will suffer.

I'd avoid catching a heavily pregnant female using a net in the last day or so of her term; it seems to be pretty hard on them sometimes.

I agree with the above. If you don't have the space to grow them out properly, you will need to find a way to let nature take its course. Whether it be hoping mom and dad will eat them, or having other fish in the tank who will eat them.

Why did you separate her from the main tank if you didn't have the means to raise the babies anyway? You may have solved the problem by just letting them give birth in the main tank.

If letting the fry be eaten is too hard for you to handle (which it is for some people) Then you should keep only males.

Same for the guppies you are now getting. If you keep putting males and females together, you will have a never ending problem.
I suggest you rehome all your females, honestly. Or separate them from the males and eventually they will stop giving birth.

Even if you jump out of your chair this minute and separate them, the females can and likely will continue to produce broods for months. Once exposed to and inseminated by a male, the female will store sperm for multiple brood births without further access to a male fish.

Trading fish in for credit at your local fish store is nice, but they will usually demand the trade-ins be raised to a minimum saleable size. New-borns the size of gnats aren't typically accepted, unless on a "for-free" basis.

Which is exactly why I used the word "eventually". haha

Thanks for elaborating though, I didn't explain why I used the word "eventually". And not everyone knows they can store sperm like that. So its good to elaborate more.

What a team we make!

HAHAHAH you made me laugh out loud at my desk. hehe

edit: your posts make me laugh a lot actually. You are very witty!! haha

Should I Transfer My Female To Another Tank?