What kind of plants/driftwood/rock would you recommend for a 55g Tetra biotope?

Member
What kind of plants/driftwood/rock would you recommend for a 55 gallon Tetra biotope?

Member
My tetras like to have places to hide, so I would say that some tall grassy and/or leafy plants would be good. I'm not sure as to the exact plants that are from the tetras natural habitat, but the fish will not mind whatever plants you put in.

However if you specifically want a biotope, try googling wherever they are from and read what plants exist there.

Hope that was at least a little helpful best of luck with your tank!

Member
I want to do a 55 gallon SA biotope...how should I go about building it?

can anyone give me a step-by-step guide as to how I would go about this?

Hopefully someone will be able to help you out today.
Hang in there!

Member
I don't think there *is* a step-by-step guide on how to set up a biotope. It's mainly just finding compatible species within a specific geographic location.

Eventually my 46gal bowfront will be set up as a SA biotope, so I'll tell you what I'm going to have in my tank and maybe that'll help you.

For plants I will be doing Amazon swords, foxtail, red temple plant, jungle val, dwarf hairgrass and java (or flame) moss. For substrate, I will probably end up doing a play sand/Flourite mix.

I will have a large centerpiece driftwood (real, not fake...the pleco uses the driftwood to aid in digestion), sandstone-colored rocks to create caves, and smaller pieces of driftwood for additional hiding places.

For your specific sized tank, you can add another school of tetras (rummynose might look good in there). As far as heating, a 200W heater is perfect for a 55gal tank (I know, I have one). For lighting, I would go with a nice T5 fixture. By going with a T5, you'll have to run CO2 (especially if your tank is heavily planted, as mine will be), but it'll be totally worth it. For filtration, I generally prefer to overfilter my tanks regardless of what's in them. Right now I have a Cascade 1000 canister filter by Penn Plax on my 55gal (well, I did before the 55gal went Chernobyl and died) and I love it. I would probably recommend going with a canister filter, mainly because it eliminates that annoying waterfall sound (unless you like that) and I find they don't take up as much room.

Hope that helped a little bit!

Member
You haven't got many replies so I might be able to help. The only kind of plant that I know enough about to give suggestions are baby tears. These need a lot of light, and if they do not have enough light will grow upwards instead of outwards. They are pretty small so I would scatter a few. As for driftwood. It doesn't really matter what kind, just go to your local river and grab pieces that you like, make sure the river is not polluted in anyway though. Also make sure you read about how to prepare driftwood to a tank. Lasty about the rocks I don't think it matters what kind, I just can't give you advice cause I have not used rock all that much in tanks.

Member
If you're doing a SA tetra tank, you could use amazon swords, foxtail/frill, red temple plant, jungle val, java fern, java moss and dwarf hairgrass. You could also do baby tears, but as mentioned above, they are a high-care plant, requiring a lot of light and CO2.

Fitz is right about the driftwood and rocks. There isn't any specific rocks or driftwood you need, just collect stuff you like and prepare it correctly (do the vinegar test on the rocks and boil/soak/bake the driftwood as needed).

Here's a pic of my 55gal which could easily have been a SA tetra biotope: 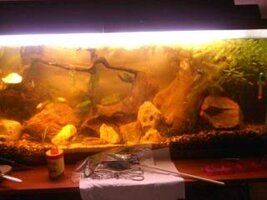 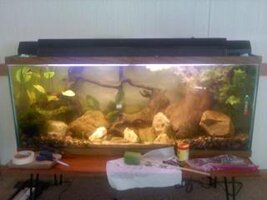 Member
Looks like you have a lot of tannins in your water. Unless that's what you were going for.

Member
I have read somewhere that there are certain kinds of wood that are not safe for your aquarium? and what do you mean by pollutants? I spend a lot of time on a river and I have seen many many things dumped in it and plus there's always runoff fertalizer and pesticides and things like that, that's the thing that worries me about taking things from a river

Member
Yes pine is one that is not safe for aquariums, also there is another one but I can't think of it. I can't figure out what the pollutants in my river are either but I know that it is polluted. I got some driftwood for myself yesterday when I was fishing in a gravel pit that was flooded by the river. I'm just hoping when I boil the wood, it will get rid of the bad stuff.

Fitz said:
Looks like you have a lot of tannins in your water. Unless that's what you were going for.
Click to expand...

Wasn't "going for" the heavy tannins look, but it happened because one of my pieces of driftwood (that piece on the far left) was too awkward of a size/shape to soak before I put it in the tank. However, fish LOVE tannins since most of the places fish come from naturally have tannins in the water anyway and it ended up looking pretty cool, so I wasn't complaining. It looked a lot cooler in person than those crummy cell phone pics could show.

Member
Aestetic wise, I love amazon swords. There are also some really nice semI aquatic plants you can get (a lot of the ones with red or purple leaves are semI aquatic) will do well for tetras and help bring out their colour. I can't recall the name of it, but there's a small flat circular leafed plant that is mostly green with a dusty red top of leaf. It's semI aquatic, and low - medium light. I have in in a gourami tank planted under floating weed and it's going great. I think that would go really well with the colouring of most tetras. And my tetras seem to like nooks and crannys to hide in, but not so much caves. When mine hide, it's in the shadow of an ornament that has a line of plants next to it. So maybe some angular rocks that create a half cave?

Member
I would use either black or red soil substrate such as Eco-Complete (other brands work as well). Driftwood as you wish. Same type of river stones or rocks. A few sword plants in the middle ground with Vallisneria gigantea planted all along the rear wall. At the edges, Sagitaria species. I think this will do.

Member
I answered this in your other thread, hopefully a moderator can merge both.