Hello!
I've kept betta before, but it was as a teenager many years ago--but back then just didn't have the information about them we do now. Now we have an alien plakat betta male named Maury and are pretty invested in his well-being. We've seen online a lot of mentions of signs of stress in bettas, including stress stripes--which we've seen in Maury; he's very shy and gets stress stripes when we clean the tank, mess with the plants, catch baby endlers, etc. In those cases I'm not really worried about it, since the stripes go away within a half hour or so of the tank being left alone. We thought he might want more cover, and recently planted more large-leaf plants into the tank to give him extra hidey-holes, which he does seem to use, and in the last couple days since planting more we haven't seen any stress stripes, so that might have solved it. On the whole, I'm not terribly worried about his health; he has a good appetite, patrols the tank, is alert but calm, and doesn't hide in any particular spot, but utilizes the full tank.

For the record, tank info: 20gal Long, 0 Ammonia, 0 Nitrites, around 20 Nitrates, 76-78 degrees F, has been running since October and he's been in it since late November. He was put in the tank last, long after cycling (used Tetra Safe Start as well as biomedia from another tank to jumpstart it) finished, 20% water changes weekly with roughly monthly larger ones, PH is 7.8, and I put almond leaves and alder cones in every few weeks. He was in a cycled QT tub for 6 weeks prior to transfer to the 20gal, and behavior before/after is consistent.

But, I have a question for the community about fin clamping in specific. He doesn't flare much at all, which is preferable--he's in a community tank with endlers and snails, and eventually some dwarf cories, so we don't want an especially aggressive betta. But he does swim around with his fins kind of relaxed a lot. I just want to make sure that I'm not mistaking clamped fins for "relaxed". He DOES flare at his own reflection sometimes, so I can confirm all of his fins are in good shape with no tears, no ragged edges, but he does hold them kind of loose and half-down most of the time. Pics: 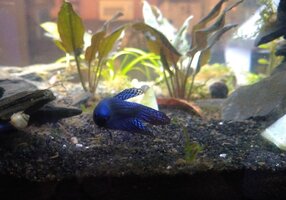 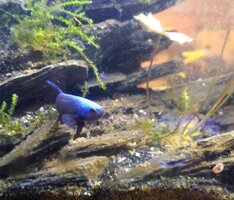 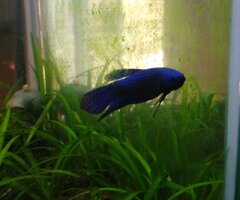 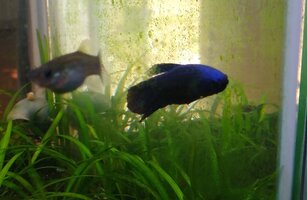 Sorry for the uniformly bad photos. My cellphone camera doesn't play nice with the tank lights. Also sorry for the green spot algae. It took me a while to figure out the credit card trick, lol. I spent weeks scrubbing at it and wondering over the fact that I couldn't scrub it away.

So---Does this look like clamped fins to you, or is Maury just relaxed and not flaring?

Please feel welcome to post pic examples of any bettas you've had flaring before. I kind of feel it would be great to have a bunch of image examples, because believe it or not it's hard to find great images of bettas clamping. Hence my confusion/concern.

To me it looks like his fins may be a little clamped. I don't have any pictures of my betta flaring, but for ref here's a picture of what he looks like when he's swimming with relaxed fins (sorry for the blurriness). I also attached some good examples of flaring that I found. 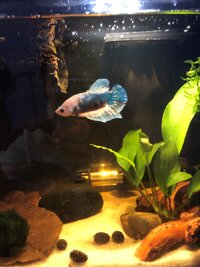 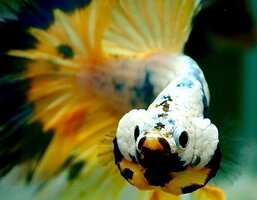 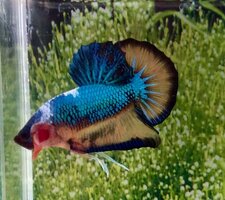 He looks relaxed to me. Clamped fins can often look twisted and knotted and are held tightly against the body. And if the fish is in the mood for swimming, it will try to swim with its fins closed (which, as you can imagine, works out great...) It's good that you have a calm boy with his own space where he feels safe.

He looks relaxed to me. Clamped fins can often look twisted and knotted and are held tightly against the body. And if the fish is in the mood for swimming, it will try to swim with its fins closed (which, as you can imagine, works out great...) It's good that you have a calm boy with his own space where he feels safe.
Click to expand...

Actually, looking at the person above me and their pictures, I agree with them. I forgot how fan-like plakats tails are, since I currently have a veiltail
You must log in or register to reply here.

Are these stress stripes on my betta?

Clamped fins and no appetite

My betta is getting stressed