What Are These Crazy Red Worms???

Check out what I found in the 1.5 gallon vase I was growing snails in! 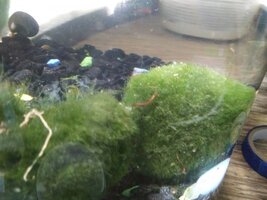 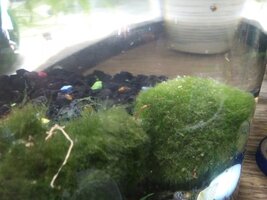 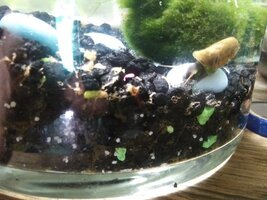 So for reference, the moss balls are about 1" in diameter each. The worm-like thing in the middle is the worm in question. In the last pic, you might be able to zoom in and see them wedged between the glass and the gravel near the surface of the substrate. They are very active, undulating in the water with a mouth-like opening on the end of a wide head section. The body tapers from the darker head section to a thin tail equipped with a pair of claspers. Sticking out of the gravel they look as though they are filtering micro organisms from the water column. The one on the marimo was traveling across it at a fast clip, anchoring itself with its tail calipers and inching forward. It was grazing in and around the marimo, but didnt look like it fed on the algae itself.

Okay, I know this is unapetizing to most folks, but I find these things fascinating the more I watch them. I'm not worried about my fish because there are none in this tank. There had been a handful of culled fry in there with a seasoned filter and an air stone for less than two weeks before I moved them. Before that it was just a tank for growing out assasin snail food and ramshorns and only had an air stone. After I moved the fry, I deliberately starved the tank of air to force the normally coy bladder snails up to the surface more often so I could pick them out throughout the day and place them in a quarantine to feed to Harry (the assassin snail) as needed (he especially prefers the dark ones.... I know, I spoil that snail...).

Well, it took a couple days for this to happen. When I finally got to pickin' out snails I noticed the usual and expected detritus worms (not an explosion, just a handful, which is good because I actually want a small population of them in my snail tanks, but seeing too many means the water is fouling).

Then a bunch of these guys started popping their heads out of the gravel. They don't seem to bother the big ramshorn snail in this tank and he doesn't mind them. They just hide or move if he passes over.

Could these be some kind of larva? I've had a lot of woodland insect buzz into my house this summer, and this tank was never covered.

I've a feeling they aren't particularly harmful. At least not to the snails. What could they be?

Looks like a bloodworm, aka midge fly larva.
OP

Oh, thank you so much! (Sorry I didnt catch your post sooner.) Midge fly, eh? That explains a ton.

So does this mean I have a bonus food, then? I found more in my other moss ball tanks (all unoccupied except for ramshorns. They graze like crazy in the moss balls. The tanks don't smell at all and the snails are not stressed.