Common names: Western Rainbowfish, Red tailed Rainbowfish, Westralian Sunfish.
Size: 10-12cm
pH: 6.5 – 8.0
Tempº: 22ºC - 27ºC
Tank region: Middle layer.
Origin: Western Australia
Gender: Similar to many other Rainbowfishes. Mature males tend to be more colourful and have deeper bodies and larger fins when full grown.
Notes: The Western Rainbowfish is not seen in the Aquarium trade as often as other rainbowfishes, like the Boesemani's or Praecox. However it has similar care requirements to other large rainbowfishes. This fish is a schooling species so should always be kept in groups; preferably with more females than males. Because of their size and boisterous activity, a large aquarium is required to happily house a school of Western Rainbowfish. They are very peaceful towards other fish, and make a good addition to a larger community. However, the Western Rainbowfish's size can spook some smaller and more skittish fish like Tetras so it is reccomended that these rainbowfish are not kept with tank mates much smaller than themselves. Good tank mates include larger Tetras, Barbs, Cordydoras catfish, Dwarf Plecos and Livebearers. This species is quite adaptable in terms of Water quality, so it should not be hard to provide a good pH and temperature for them. As with most rainbowfish, this species needs plenty of open space to swim but also appreciates plants to provide a peaceful retreat. In the wild, Western Rainbowfish colouration can vary with each population. Western Rainbowfish are not picky about food, and thus should take most commercially available fish diets. There have also been reports of this fish eating duckweed - a true bonus for some aquarists! Overall this is a very good, adaptable large community fish that doesn't come up very often but when it does it is well worth a purchase. 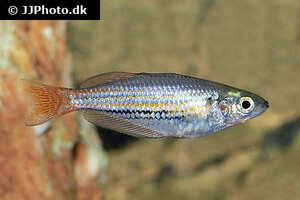 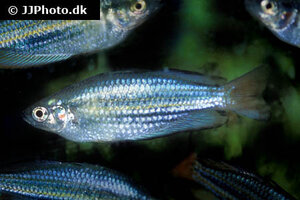 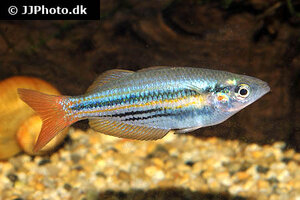