Today I'm welcoming my new Koi Betta, Hotei to our family. I was at PetSmart A LOT over the last couple of weeks because I was stocking a different tank so I saw him at least 4 or 5 times. I never knew there was such a breed. This little guy got my attention immediately as he would swim to the front of his cup and wiggle around to get noticed (that's how I got my first Betta!). However, there was another Platinum Betta that was on the shelf above him and I saw family after family come and pick the colorful ones. I told myself if he was there on the next visit, I'd take him home..and I did. Sadly, he was sick and didn't survive 2 days before passing. I thought I could save him..it broke my heart.

I recalled this happy little Koi Betta I affectionately called "Happy". I had some returns to make at PetSmart, decided if he was there, he was coming home with me. He was so happy when he saw me (Yes! He knows exactly who I am..ha ha ha)! Swam right to the front of his cup and wiggled all around. He must have known he was going to his forever home today. Funny, the gal helping me with other things (has a bunch of Bettas herself) saw me looking for him and asked "are you looking for your Koi Boy, Happy?". I laughed. "Why yes I am! And HERE he is!".

My other Bettas have large fins but this little guy, I just fell in love with! I love his dark eyes. They do tricks! Reminds me of the scene in Men in Black where Will Smith is in his orange jumpsuit chasing the alien on the roof and it does that double eyelid blink. Once in his tank I noticed that cool light aqua iridescence on his fins and gills. He's so handsome! I love that he'll swim forward and then throw down his 'brakes' and suddenly come to a complete stop! What a cool little dude! He's already mastered his Betta Hammock and floating log, just waiting to see if he likes his Temple. I look forward to watching his colors change as well. What a sweet boy! I couldn't save Shy, but I think Hotei is gonna be a great companion! As I write he's at the front of the tank on his Hammock watching me. He's reminding me to include several photos..lol! Here they are!

Hes handsome! Im surprised he sat for some time, he woulda been scooped up within a day here

MissNoodle said:
Hes handsome! Im surprised he sat for some time, he woulda been scooped up within a day here
Click to expand...

Nope..poor little fella sat but he was so (and still is) animated..he REFUSED to be ignored. I feel bad for him because he must have put on his show for everyone that passed and yet no one scooped him up. They wanted the colorful big fin Bettas. But I'm okay with it..he must have known I would be back for him. So happy to have Hotei in my life!

He reminds me of my betta, Cosmo. He as well was from Petsmart but was sold as a female betta. 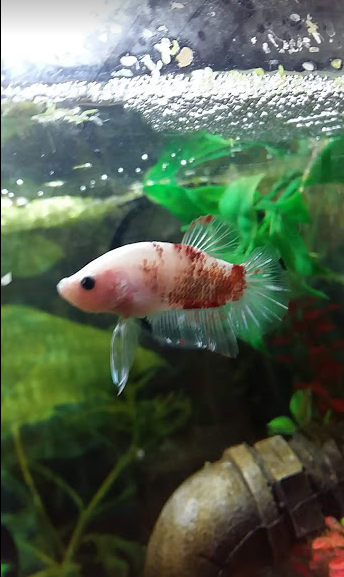 CanadianFishFan said:
He reminds me of my betta, Cosmo. He as well was from Petsmart but was sold as a female betta.

I'm excited this morning to see that Hotei is enjoying his new home! Late yesterday afternoon he enjoyed dinner. I love that he eats with such zest! Just like his brothers! Last night I checked on him a couple times and I see that he's taken to doing the same thing as Sebastian. He lies on top of his Bonzai to wind down but when it's time to go to sleep, he ventures into his Betta Log! Walked in this morning to check on him and he swam to the front to greet me. Couldn't love him more!