I've had a female flame dwarf gourami for a couple weeks now named Marin. She started off super shy, and now behaves like a hyper little puppy whenever I walk by and leaves the other tank residents alone.

Anyway, I noticed that she's developed this spot on her head 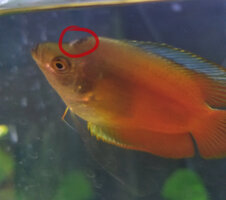 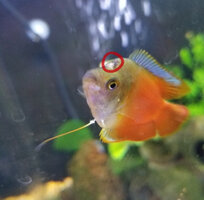 I searched and a couple people with this problem ended up finding that their fish had the fatal Dwarf Gourami Disease. Though part of me wonders if it's just from her hitting her head on the tank lid when she jumps up to beg to food. Or it could be something else...

I really do hope it's the latter, but a second opinion would be good.

She's not displaying any other symptoms of DGD though, she's still very energetic. My water parameters are normal and I do water changes once a week.

It's very difficult to diagnois from the pics, but the location of the blemish is just the prime spot for a head bump injury. The white growth might simply be a fungus attached to damaged tissue. Just keep an eye on it & keep the water clean. It will probably clear up on its own.

My Dwarf Gourami got a similar injury, he got it from getting stuck in a decoration, water changes should help him heal.

Cultural Difference in the Aquarium Hobby