I wanted to ask if please someone would be able to determine what is wrong with my fish. They are two rummynose tetras. They lived in 128 l aquarium with other 11 rummy nose, 9 white cloud mountain minnows, 1 bristernose pleco, 1 siamease algea eater, 1 honey gourami. The tank is running for 7-8 months so the parameters should be fine. The only parameter that I think it could caused it is pH. Because I have a CO2 set and there were sometime some fails and things I didn't know it in the beginning + I turn it off for the night so there is still some little fluctuation still happening.

Other thing is that I got the rummynose in batches and one batch of 4 felt kind weird from the beginning I got them. One of them had little white spot on him. And after like a month in quarantine they started to darken in some spots. But I thought that it could be because there is no sand. So after 5 weeks in quarantine I decided to add them to the main tank. They were in the main tank for 3 months. Like 3 weeks ago 1 rummynose died. It wasn't in the tank for long dead but other already ate it little bit.

First thing I started to notice that their eyes got a little bit bigger than the others. But I didn't think that it was so extreme to be a serious issue of popped eye. And thought that it was only a minor issue caused by the pH. Later I started to notice small blisters (multiple small ones), tumors or what you want to call it on the 2) Rummynose tetra. It scales started to be kinda more to silver. It looked like reflections. It was behaving normally schooling with others breathing normally. I got more worried when on the 1) Rummynose started to forming a bigger blister (one big one) in the middle of it's head. This one also started not to chill with the others and was by itself and also breathing heavily sometimes. It didn't had so many silver scales like the other. Both of them were eating normally.

My theore is that they had some genetic flaw which was triggered by the fluctuation of pH. Other options are tumor / or they catched something from the dead fish. It doesn't look like fungus to me because it is not fluffy. When I was researching it also looked a little bit like neon tetra disease but I read somewhere that this disease kills them really fast and for the 2) this started before quite a long time. Today I was finally able to transfer them to quarantine.

So my question is if someone knows if I could do something about it or maybe help me identify the cause of it. Unfortunatelly I'm from the Czech republic so if you will recommend some US medications I won't be able to get them. Or if I should just put them out of their misery.

Sorry for this essay but couldn't find anything online about this issue and is a big mystery for me so I wanted to provide you as much information as I can. 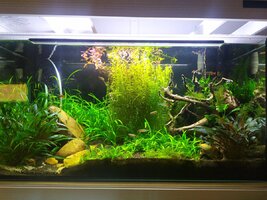 Thank you very much.

The thread is no longer revelant.
Upvote 0
You must log in or register to reply here.

Symptoms of a Stalled Fishless Cycle and How to Fix it