d0ggiem0mma
I've tried to make sense of this, but I'm not really sure what to take from it.

I took a baseline sample of dechlorinated water from my tap (not the tank) and here's what I got:
Ammonia 0
Nitrate 20
Nitrite 0
ppm hardness 120
ppm buffering 80
pH 8.4

I setup the tank last night, dechlorinated the water, let the water warm up (it's at 73 right now), and added bio-spira. That's it. There's no fish yet, I will be adding a few tonight. Here's a picture of my tank setup too. 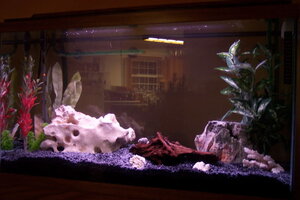 (if the right side is cut off you can follow the link to my album
Lucy
You have a beautiful tank.
Is that drift wood and lava rock? I think I remember reading something about both and ph here on the forum.
Sorry I can't be of help.
d0ggiem0mma
There is a piece of driftwood and a hunk of texas holey rock. The other rock in the left corner is a fake =) All the plants are fake.
capekate
Texas Holey rock is used sometimes to help raise the PH levels in a tank. Driftwood is used at times to help lower the PH levels.

~ kate
d0ggiem0mma
Well that still doesn't make sense since the water went from over 8.4 at the tap to 6.8 in my tank!

What do you take from the other numbers? Is everything looking OK?
susitna-flower
What are you using to test? By the By WELCOME TO FISHLORE !

Don't worry too much about the ph... and DON'T try to change it with chemicals. That causes too many problems. If you acclimate your fish slowly they will adjust, most fish do fine in a wide range of ph. If you want it higher, take the driftwood out, otherwise leave it as is. I like your tank!

What are you using to test your water? The kit I recommend is the API Master test kit, (liquid), which gives reliable results. I would be concerned with nitrate out of the tap at 20! That is not good, it will be hard to keep the nitrates down in your tank, but worse it is not good for you either!
d0ggiem0mma
I have a strip kit right now, but it's not the jungle kit. It's better than the jungle kit, but I'm guessing I need to get the liquid kit. As for the nitrates, you think a Brita filter helps with that?
d0ggiem0mma
OK, I got the API liquid test and here's what I got for results:

Is anything here alarming? I had 1 fish die and another started acting like he was going to die so I took them back to the store. They tested my water there with more strips and said my ammonia and nitrates were killing the fish. Just in case, I added a poly filter and did a 20% water change using bottled water since my tap water is high in nitrates to begin with.
SereneReyn
well, I don't know that I would accept what the store said. it does seem as though your water might be still finishing up the cycle or something tho. I would give it a few days, and when the liquid tests were consistent, (and amm - 0, nitrite - 0, nitrate - around 5 each day)... then I would get fish. remember to 'feed' your tank in the meantime.

also... what water conditioner did you use? certain products create complications with bio-spira... I know that prime is one of them, as well as any others that bind ammonia.
d0ggiem0mma
I added 6 fish yesterday, 1 died, one went back to the store, so my tank still has 4 fish. I know the tank is still cycling since it's only been 3 days since setup. As for water conditioner, I used a plain dechlorinator with no additives and then the bio-spira, that's all that I've added to the tank. I really think they must have been weak fish or something because this isn't adding up!
d0ggiem0mma
Woo hoo! Looks like I have my first bacteria bloom! Hopefully that takes care of the ammonia spike and my fishes will be happy. Here's a couple pictures of the survivors.

bacteria blooms are good and bad at the same time. They're good in that they indicate the bacteria is thriving...bad in that the population will soon crash and there won't be enough bacteria to process the waste for a few days. same thing happens with rabbits and mosquitoes...and any other organism.

I would do small water changes daily (maybe 10%), but only vacuum the substrate once a week. you want that food for the bacteria, but you also want to keep the levels from spiking. It'll take longer to cycle, but it's safer for the fish.

with your readings, I would suspect you only need to do that for a week. then start extending the interval.

btw: the lfs gave you a halfway truth. The ammonia might be high enough to kill fish (depending on how big they are, large fish are less prone to dying), but the nitrates are FAR from dangerous. My water has 5ppm nitrates in it from the tap!

Difference In Kh And Gh