January 2021 News:
Happy New Years! The month of January has been a bit uneventful as far as the farm goes, but the plants have been growing along steadily. These winter months, even in a sunny area like SoCal, are among the most difficult months of the year for growing. The cold temps, coupled with low humidity and reduced sunlight hours make growing fairly difficult. Many plants continue to flower, which becomes a bit of an issue as the plant stops producing the vegetative shoots that I need for submersed cultivation.

LED Tub:
As per the past few months, the LED tub has continued to run smoothly and with large and predictable harvests. Though the LED tub is mainly out of the way of the natural elements, it is still exposed to a bit of morning sunlight. This sunlight has seemed to induce the flowering stage in my Pogostemon octopus (Pogostemon quadrifolius), as seen in the video linked below. The terminal buds of the plants are characterized by shorter, fat leaves with a flower starting to grow out the top. Over the past few years, this particular plant has tried to flower aggressively during the winter season, no matter if it is growing submersed or emersed. It is one of the only plants I've cultivated which tries to flower, even if underwater. The flowering stage occurs during the short-day cycle (winter in CA). Unfortunately, I do not sell Pogostemon that is flowering, so I've had to move most of my Pogostemon octopus to my indoor tanks which don't receive sunlight, thus allowing for normal development.

Additionally, I also did a great harvest of my Echinodorus purple aflame swords, with some of the best specimens I've grown in a long time. It's a sensitive plant that isn't too easy to grow in systems that experience a lot of change (like mine), but with consistent maintenance and aquasoil substrate, I was able to grow them out at a decent size without algae. This plant is probably the most unique and incredible aquatic plant out there; the deep purple coloration does not look real. But I can assure you that it is a very real plant

Greenhouse:
The greenhouse has been productive, though some growth has slowed down due to the reduced sunlight hours. Nevertheless, here are some cool plant pictures: 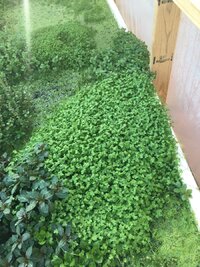 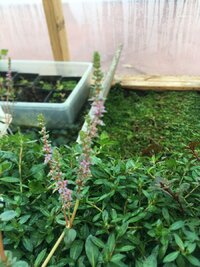 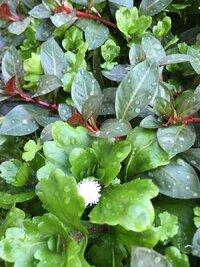 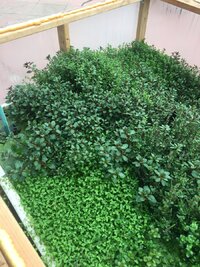 Nano Tank:
The nano tank has been allowed a while to grow out, and is finally near it's final stages of the scape that I originally envisioned. In about a month, I'm hoping it'll be at its peak. 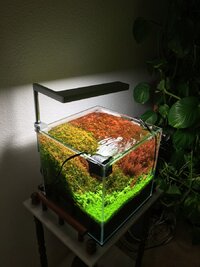 40B Farm Tank:
I've spent the better part of this month tweaking the CO2 on the 40B. It takes a while to get it right, especially when plants are constantly going in and out of the tank. It is working much better than expected, but it still needs a few weeks to become properly established. Here are some pictures of the tank itself, and some of the awesome plants it has grown just within this short period. 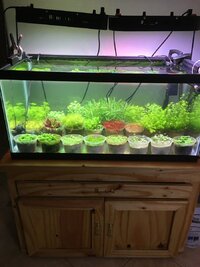 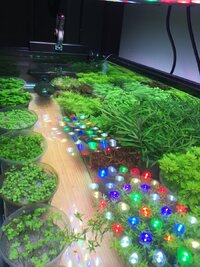 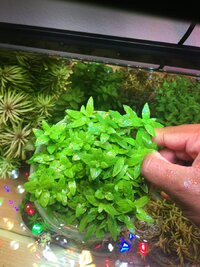 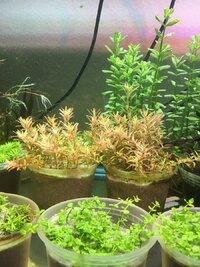 Thank you for reading!

That Echinodorus is amazing! Your greenhouse pics make me super jealous!

Completely agree! That deep purple coloration is probably the most incredible color I've seen in a plant, aquatic or not. Under a good light, this plant is an absolute marvel to be seen in person. The camera does not do that purple color justice!

I might have to buy one of those eventually! I'll just have to get my tank a bit better suited to them first though.

I have a finnex 24/7 planted in 55gal and my 20 longs and 10 gals share 48in finnex stingray 2 are these enough light for the purple aflame? I need these to match my purple guppies.

I have a finnex 24/7 planted in 55gal and my 20 longs and 10 gals share 48in finnex stingray 2 are these enough light for the purple aflame? I need these to match my purple guppies.

That should be enough light, though ideally they'd need CO2 as well for maximal coloration and success.

Currently, I'm not selling them or growing them anymore because they are not very profitable for me in the long run. I have some emersed ones growing in my greenhouse, but it'll probably be many months before I decide to grow them submersed again. Online, the price typically ranges from $10-$25 per plant depending on the size and submersed/emersed condition. They're reasonably priced as TCs, but growing from TC takes a long, long time.

In 20 long it is probably enough light but it won't grow well. I have one from tissue that is a year old that barely stayed alive in a 20 long and then (moved) to a 40 breeder. Since I added co2 it has picked up a bit but it is still extremely slow growing. My light on the 20 long was fluval 3.0 which is a bit brighter than your light but not by much. My light on the 40 breeder is an onf flat+ which is 1.5x brighter than a fluval 3.0. A plant that grows faster is kleiner prinz sword not to be confused with the kleiner bar sword (commonly found when searching). This sword is more reddish than the purple aflame but much denser and again a small plant. It does have more blue than a melon sword just not quite as pure purple as the aflame. It again flourish with co2 but seems to be okish without co2 in a shallow tank. In the 29 with fluval 3.0 it is struggling and i'm unsure of the future. I have it in a 5 with an extremely strong light and it seems ok but not nearly as purple as in the 40B with co2 (the light on the 5 gallon tank is nearly 1.5x the onf-flat so very bright. It is a small sword. There are melon swords which are also quite purplish but I can't put a specific name on them - i have several different types with varing tints. When looking at pictures remember that many of these swords are shown in emersed form and will have green leaves as is the case here:

(there is on submerse leaf shown on this plant)
-
With co2 melon swords will get quite large (20+ inches) but without co2 they tend to stay under 8 inches.
-
There are 10s if not 100s of types of sword plants and purple aflame is one of the most difficult to grow and even with a good environment it will grow very slowly.


I have a finnex 24/7 planted in 55gal and my 20 longs and 10 gals share 48in finnex stingray 2 are these enough light for the purple aflame? I need these to match my purple guppies.

Tutorial - How To Clean A Quietflow Filter Motor