February 2021 News:
This month was unbelievably busy, but the farm has gone through some steady changes. The weather seems to be warming up a bit earlier than normal this season, which seems to be quite promising for this upcoming Spring growing season. With warm weather upon the farm, plans for the Spring are coming into place.

LED Tub:
The LED tub is consistently performing as it has been doing the past few months. It has proved to be one of most reliable and easy systems. One thing that I've struggled with as mentioned in previous posts is stunted root growth, often caused by overcrowding and a substrate layer that was not deep enough.

However, one thing that I did not consider at the time was that my substrate was too compact because the size of my sand grains were too fine. While I've known for a while now that my sand was too compact, I didn't realize what a large impact it had. A few of my systems have received pots filled with a much coarser sand that is more like fine gravel. There is plenty of spaces in this substrate and it seems as if water can flow much better through it, which provides a much healthier environment for the roots. The results have been quite promising, with faster, uniform growth and better root development.

I've switched most of the substrate in the LED tub to coarse sand with a large gravel layer at the bottom. I am excited to see how the results play out in this system.

Greenhouse:
As the temperature has been warming up and the daylight hours have increased, the temperatures in the greenhouse are getting immensely hot. My greenhouse thermometer has measured a few readings in the low triple digit range. It seems that the humidity retained within the greenhouse is the only thing that keeps the plants from dying from that immense heat, and it probably contributes significantly to the heating effect in the first place. Managing the greenhouse in the warmer spring months and the summer will prove to be an interesting challenge, as I can easily foresee temperatures rising to 150F or above without proper care being taken. 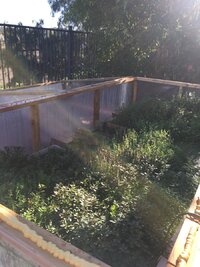 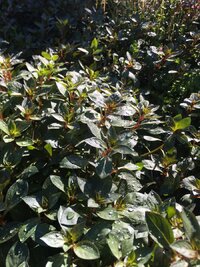 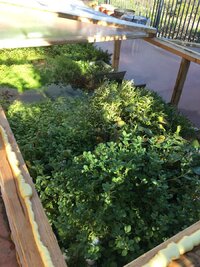 Nano Tank:
The nano tank definitely reached its peak in the month of February. While the peak wasn't exactly what I had hoped for in terms of final growth/look, it was a decent effort. Unfortunately, I did not time the trimmings of the dominant left bush with the rotala h'ra bush on the right, which diminished the overall effect of the scape. I overestimated how much life was left in the bottoms of the older bush on the left, but it is all a learning effort. Though I am not an aquascaper as my primary focus in this hobby, it is something that I strive to get better at. 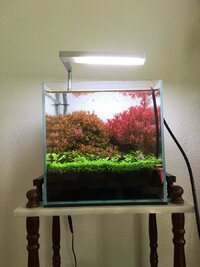 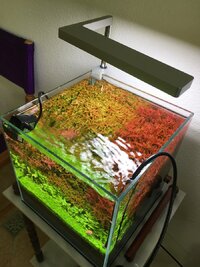 I ended up tearing down the nano tank toward the end of February. I was pleased to find that there was a thick mass of healthy white plant roots in my DIY mineralized topsoil substrate, which indicated to me that the soil had not gone anaerobic. Additionally, there was no smell which was also a good indication that things were healthy down there. As indicated in the pictures below, the monte carlo mat had grown extremely thick and lush which was quite a nice sight to see. 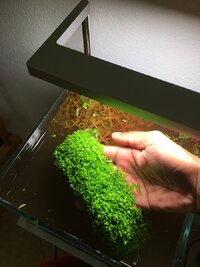 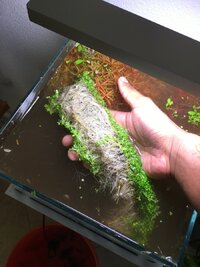 I am going to be rescaping this tank soon, but wanted some feedback from the community. If you had unlimited plant options and you could do any scape that you wanted, is there any sort of design/aquascape/plant that you would implement in this small 4.1g nano tank?

Personally, I'm leaning toward a scape that is less stem dominated and will have tiger crypts, flamingo crypts, and a small tree with spiky moss attached. However, I'm not entirely sure yet what I'd like to do. Any feedback or suggestions are greatly appreciated

40B Farm Tank:
The 40B has been growing plants nicely and consistently. It is relatively hassle-free and is proving to be a tank that is easy to maintain.

It's growing some massive S. Repens like this one in my hand. It's nearly 3 inches in diameter, which is quite an impressive feat. 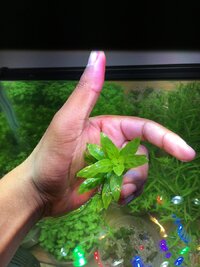 10g Experimental Tank:
For the longest time, I've wanted to try growing plants that are considered to be traditionally difficult. In the past, I did not indulge in these species because they did not align with the rest of my plant selection, which would make selling them a bit of a hassle. Seeing as this is one of the last few months that I'll still have all my aquariums, I've decided to plunge into this area of the hobby and try to grow some stuff that I've been wanting to try for a while.

I set up this 10g with a simple HOB filter, pressurized CO2, and cheap Nicrew LED light. A lot of the light is also supplemented with directed sun. So far, I've received plants such as Ludwigia pantanal, Rotala ramosior florida, Bacopa colorata thus far and I hope to purchase more uncommon species in the near future. The plants seem to be adapting to my conditions quite easily, but they definitely took a beating during shipping. The majority of the plants in the tank include Pogostemon erectus, Crypt flamingo, Spiky moss, Staurogyne repens, Didiplis diandra, and Limnophila heterophylla. 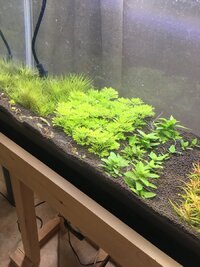 Other Cool Plants:
An Amaryllis bulb I got as a present is now throwing out some gorgeous flowers! 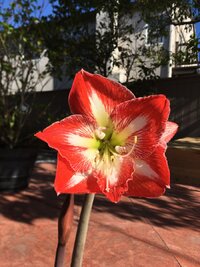 Thank you for reading!
H

As always, magnificent! If I may ask, why is this one of the last few months that you'll have your aquariums?

wow, I knew you sold plants and stuff, I didn't know you had an awesome plant farm.
OP

As always, magnificent! If I may ask, why is this one of the last few months that you'll have your aquariums?
Click to expand...

Hopefully I'll be able to go back to college in-person this fall, so I will likely be getting rid of most, if not all of my aquariums by this summer.

also, you do put those plants in aquariums right? how did you get them to grow emersed?
OP

also, you do put those plants in aquariums right? how did you get them to grow emersed?
Click to expand...

Yep, everything I grow for sale are aquatic plants. I only keep emersed stuff in my greenhouse, but it was pretty easy to convert them. Allowing the stems to float on top of the water for a few weeks caused them to eventually creep out of the water and form thick mats. I also have some emersed crypts/swords that are simply a pot of soil and/or aquasoil in a layer out of water, and the leaves grow above the waterline.
You must log in or register to reply here.

If you are unsure of a particular aquarium term, check out:
FishLore's Aquarium Dictionary